It’s simple, great script, great crew and great creatives is what makes Tamzin Outhwaite tick as an actress. One such film to be proud of is Bull. Itching to work with London to Brighton director Paul Andrew Williams, Outhwaite is in fine company with actors Neil Maskell and David Hayman in this exquisitely executed, gritty, yet artistic revenge thriller. In a world where there so much emphasis placed on glamour, I one hundred percent admire Outhwaite for accepting a role where the veneer is stripped back and any kind of vanity has been completely dispensed of. There’s a real authenticity about the actress and we had a lot of fun talking about her new role and the admiration she has for the accomplishments of the film. 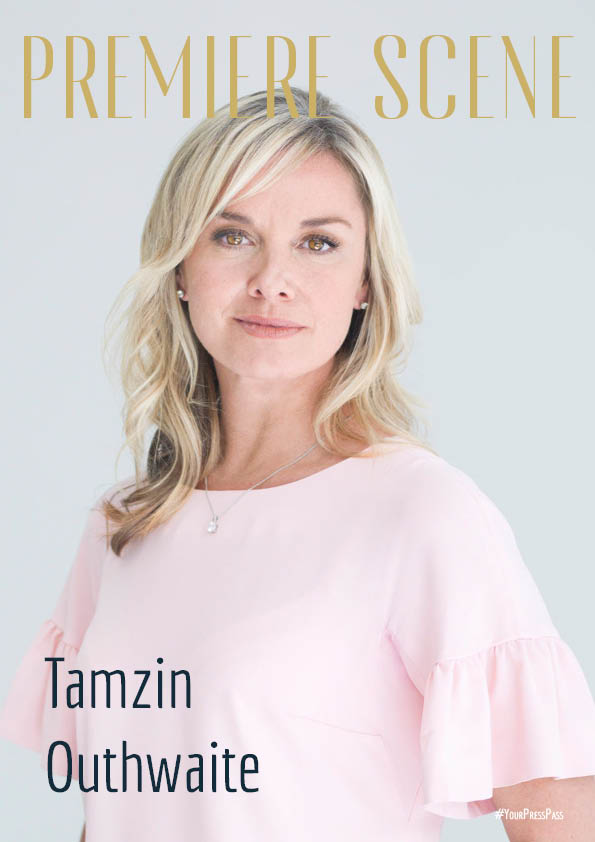 I imagine when you read this revenge, thriller, it was such a page turner for you as an actor?

It was. It’s like yes it was the script, but it was also the person attached the script, Paul Andrew Williams’ the reason that I did it, because I always wanted to work with him. And nearly had a couple of times and basically it was his creation, his writing, it was his feature. And it was a big move to try to do that during the pandemic on a small budget, with a short amount of time and lots of locations, and stunts, and all of it. And it’s, I mean to be honest as somebody that doesn’t like violence, I LOVED the film.

I know, I think because it is a revenge thriller and Neil Maskell’s character Bull, he’s on this quest, well pursuit really and I think when it comes to the human condition we can justify the violence when we know he’s innocent in all of this isn’t he? And he wants to get his own back?

Yeah (laughs) and I suppose it’s the feeling that you’ll do anything for your kids. And if you are a naturally violent human anyway which obviously his character must be. It almost normalises it, doesn’t it?

Absolutely. And with regards to your character Sharon, I saw her very much as this kind of matriarchal role, almost like the Billy Whitelaw, Mum character in The Krays. I wondered whether you saw her in the same way?

Yeah, definitely. And the feeling of like…. I mean when we actually shot it, it was lovely because David Hayman is a wonderful actor, I have worked with him before on something and I couldn’t even remember what it was when I saw him. You know when you’ve been around for a long time you can’t remember what you’ve done and what you haven’t (laughs). And seeing him, he was like the patriarchal figure gave me a position in the film. Because I actually wasn’t sure what my position in the film, or what my place, or what my status, or where I was in the family. And when I went in on my first day and met David, it was like, oh your place in the film has given me mine.  So that was really comforting actually, to know we were on the right path. I mean I think what Paul’s done with it cinematography wise is incredible and also the use of music, the use of time, it makes it really compelling to watch doesn’t it?

It’s set in that underworld, but with the use of classical music, some of the slow motion of some of the scenes. I mean it’s very artistically made isn’t? As much as it made on a low budget it’s got that production value hasn’t it?

Yes, Yes, and that’s Paul. And what I loved about it, when you’ve got vision like that he could have shot that in a very basic underworld way. But he’s turned what looks like a gritty, violent drama into art.

Absolutely. And going back to you working with David Hayman. There’s an incredible scene between you to. So to have you and him, two seasoned actors, having him as your scene partner, there’s whole variety of emotions going on between you when you find out about one of your sisters. So I wondered whether you can talk me through how you worked together, because it’s so magnetic the both of you.

Yeah, well he’s a wonderful man, but I think what it was we had a small amount of script and  a little bit of impro and I can’t remember which bits have ended up in it, but when we were actually shooting it. That was the closest we ever got during the pandemic to another human. And I mean we are both like this and as soon as it finished we would have to step away but. I think there was just like the chemistry, and we both definitely had an awful lot of mutual respect (laughs) for each other, and each other’s work which meant that I did feel a lot like I didn’t want to let him down. And also he created the atmosphere, I suppose in a way for us actors to work. Well Paul created the atmosphere, but David Haman took it on and he felt a little bit like our leader in that scene.

Yeah I can see that, he has such gravitas hasn’t he?

He makes every moment count and I think that was the magic of that scene is that both of you had a chemistry really.

Yeah, I mean I adored doing that scene, I think he ….. I could watch him all day long, you know, he doesn’t do very much but it’s all going on.

And with regards to Sharon, I see you as an actor who will do what you need to do to serve the character, but she so lacks vanity. For somebody who is as beautiful as you are, is it nice to strip all that back and just….

(Laughs) I’ve always been about the lack of hair and makeup it’s a liberating thing. And knowing that when you are getting up in the morning and you’re tired it all serves the character (laughs). How you look, you know being in makeup and not having any is, is a really wonderful thing for me as an actor. Bearing in mind that an awful lot of stuff is completely the opposite. So I liked doing that and I also feel like it’s sad that it happens like that, that people seem to take it a bit more seriously what you’re doing if there’s not vanity involved, so yeah. 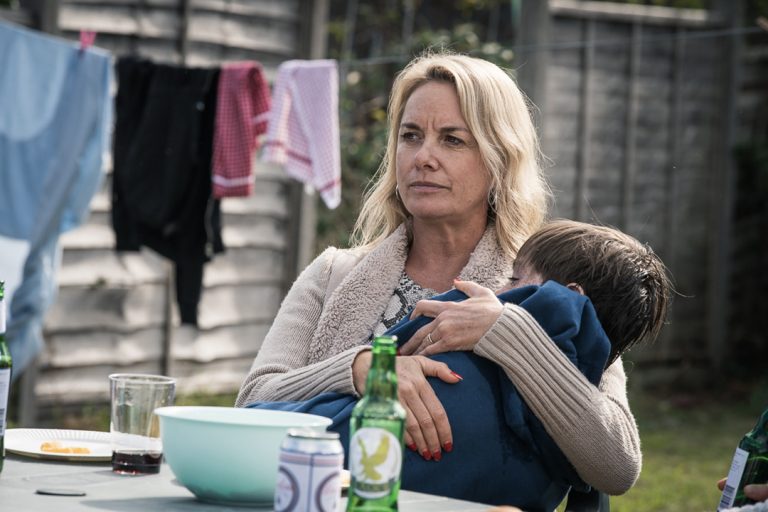 “To play a small part in a masterpiece is far more beneficial than playing a large part in something that’s not as good.”

I can’t imagine you having to do a huge amount of backstory on your character, yet she’s probably somebody that you know from your past and I wondered if Paul allowed you to bring that really?

And with regards to your preparation for your roles, are the kind of actor that listens to certain types of music or are you the type of actor that walks on set ….

It depends really. It really depends, if it’s very much on me and I’m like the lead or whatever there’s a lot of gaps that you need to fill and music is definitely one of those parts of the character, where as with Sharon I felt that I kind of knew her. I didn’t have to find her through music but it did have to go to some dark emotional places before the scene. So really it’s about separating yourself which was great and easy to do during the pandemic, ‘cos there was not loads of larks and jokes and fun and everyone gassing around because, we’re in a pandemic, you can’t go close to people, everyone’s got masks on. So actually it probably did help that because you’re isolating yourself and a lot of the characters are isolated in that aren’t they? It’s grief, grief, its emotional grief.

That is true, that is a theme really that is threaded throughout the film isn’t it? Is this grief. And I wonder as well with making independent films. Brits make great independent films, we don’t have a studio system. For you who has done so much TV and film and big budgets, for you to come and make a film where I imagine everybody is on board, you’re making it because of the love of the story. How import is it for you to support independent film?

Oh, very much so, very much so. When you have a script like that and you have a team like that, a crew like that. For me some of my favourite films are British films (laughs). And they’re not big budget films, but I do think that, how do we go about, I don’t know, how do we go about getting more funding for our films and film industry now? I do feel like the more we do, the better it will be for us. I sometimes have to sit with my kids and watch Marvel films, they’re obsessed with Marvel and the fantasy and budget and the special effects and all of that. I can watch it, but I can’t actually invest to the degree to the characters as I can when I am watching reality, when I am watching something that actually is possible, that does happen, that is true. And I think we as Brits do that brilliantly.

You’ve hit the nail on the head with that, because for me, yes it’s a revenge thriller but the way that Paul has written the characters, they’ve really got depth and dimension and I image that was very appealing for people watching this film?

Yeah, the lead is not a goody (laughs). We are following someone and understanding someone that is a messed up flawed individual, so that is much more interesting. 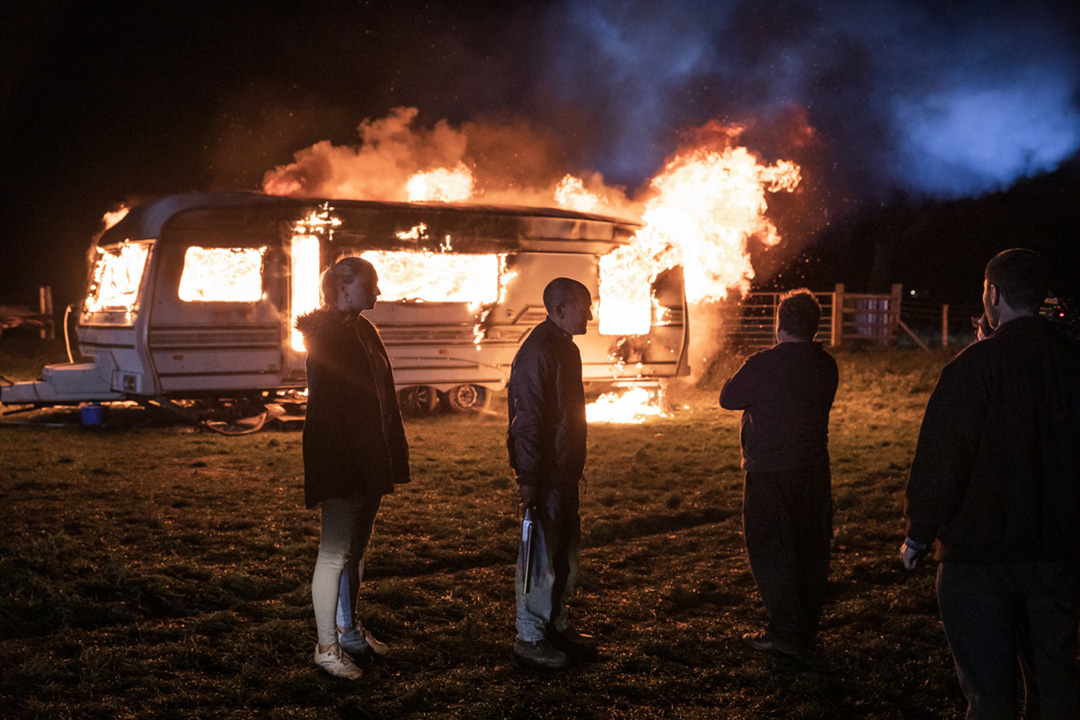 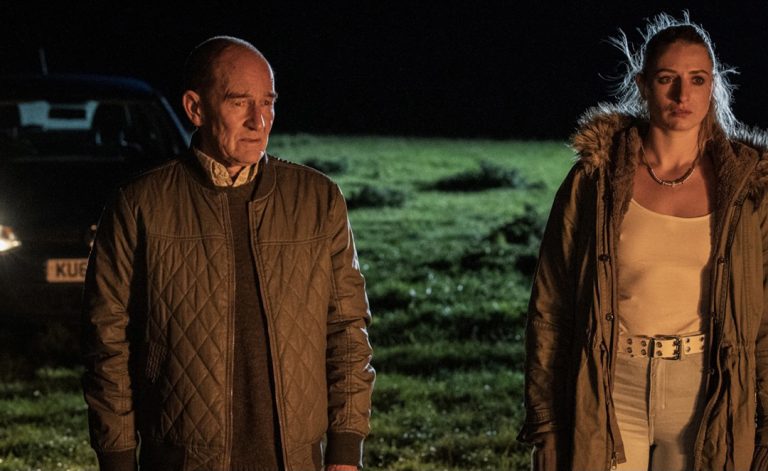 Is that interesting for you as an actor as well because the fact that your job takes you so much out of a daily routine, of what your life would normally be like, to inhabit and explore the extremities of a human beings personality. Is that part of the fun for you?

Yeah! That’s why I don’t go to therapy at the moment (laughs). Before I used to do therapy and since getting an array of lots of different type of characters, for some reason it’s the most cathartic thing ever to be able to play that out and get it out.

What have you taken away with you from being a part of this film?

Erm that low budget, low wage, low budget. But great script, great crew and great creatives can somehow come up with this in my eyes from Paul, is a bit of a masterpiece and to play a small part in a masterpiece like that is far more beneficial than playing a large part in something that’s not as good. 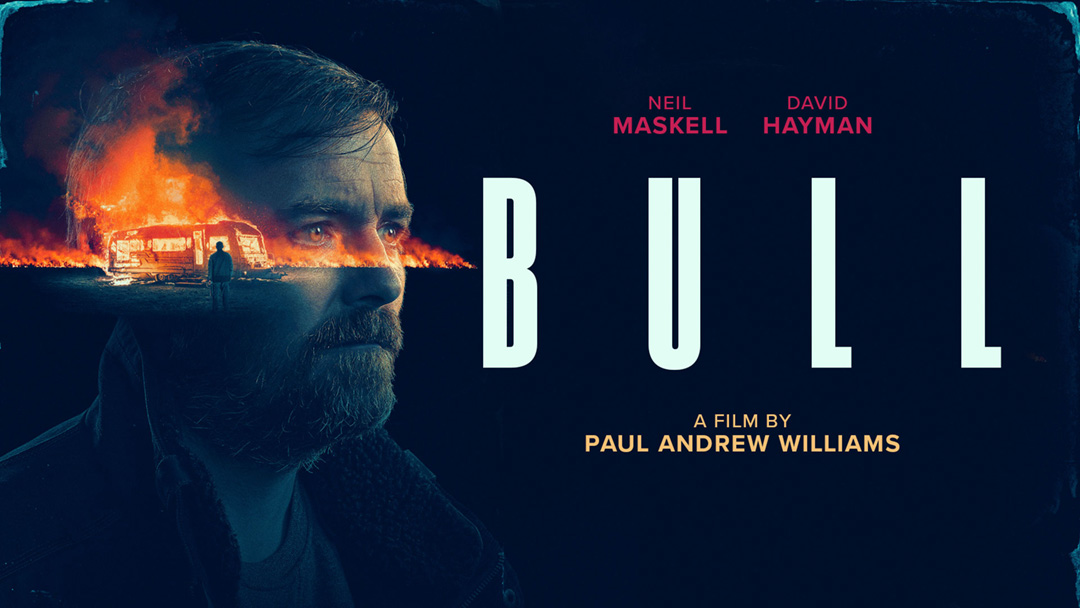 With special thanks to Signature Entertainment