“You may give the world all you’ve got, and the world may kick you in the teeth. Do it anyway,” says Hedy Lamarr on an audio cassette recording, which will form the backbone to BOMBSHELL: The Hedy Lamarr Story, an insightful, fitting tribute to a Hollywood screen siren and inventor.

Who would have thought when the documentary’s director Alexandra Dean, a Bloomberg documentary producer, was in pursuit of finding inspirational female inventors, she would be presented with a book about the film star Hedy Lamarr.

Hedy Lamarr was the inventor of frequency-hopping. The significance of this invention is colossal, as it is this invention that is the basis for all modern ‘secure’ technology, such as WIFI, GPS and Bluetooth.

Even if you only take First World counties into account, think where you would be today, without your mobile phone, tablet or laptop connected wirelessly. Free of restriction, free to roam at home, in a street, café, restaurants, hotels, the list goes on.

Hedy Lamarr was the inventor of frequency-hopping. The significance of this invention is colossal

Lamarr is the epitome of having brains as well as beauty, and BOMBSHELL: The Hedy Lamarr Story, manages to strike the balance of celebrating both.

There is no doubt that Lamarr lead an extraordinary life, and the documentary reveals this without sensationalism.

Audio cassette tapes belonging to journalist Fleming Meeks, form the foundation of the film. A serendipitous find, as the filmmakers were already six months into production. Once these tapes were uncovered, it would subsequently change the direction of the documentary.

The richer the doc, is for it too. Not only does it bring a certain charm, but this first person account, really humanises the film. It has a sensitivity and integrity to tell Lamarr’s story with her, and not just about her.

Accompanying interviews by family, friends, admirers such as Mel Brooks and Diane Kruger serve to enhance an already solid documentary. 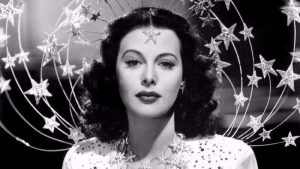 Having converted one of her bedrooms to act as an edit suite, Thelma and Louise actress Susan Sarandon earned her place as executive producer of BOMBSHELL: The Hedy Lamarr Story. It was a funny anecdote to hear at a recent Q&amp;A held at the BFI Southbank, but for me it was a reminder of how many of us compromise and sacrifice, to make a passion project work.

I knew nothing of Lamarr’s life story, and I am not going to rob the viewer of the rewards I gained from learning about this remarkable, inspiring human being; you need to see it, and be enlightened yourself. Though I will say, you will experience a wise, humble, and a very real person.

As a lover of the ‘Golden Age’ of Hollywood and a documentarian myself, I enjoyed this documentary immensely on so many levels, and it ticked every box.

BOMBSHELL: The Hedy Lamarr Story preserves the memory of the Samson and Delilah actress who was a role model, a woman ahead of her time, and a trailblazer.