When producer Kris Thykier was looking to produce an epic love story, he certainly found one in Ali and Nino, the Azerbaijanian equivalent to Romeo and Juliet. And as with Shakespeare, the true identity of the writer remains a mystery.

Based on the book by Kurban Said

Available on Blu-ray and DVD

Set in early 20th century Buku, Azerbaijan, Ali is a Muslim from a noble family, Nino a Christian, daughter to a prince, but their love is blinkered from faith.

Having sought permission from his father, Ali then approaches Nino’s father to ask for her hand. But with Europe on the eve of World War I, the marriage would be unwise in such uncertain times.

But trouble lies much closer to home, as the oil rich Buku, faces an imminent Bolshevik Revolution.

Here lies the heart of the film, as this is a film not only of romantic love, but a love for one’s county, and the sacrifices you are prepared to make for it. 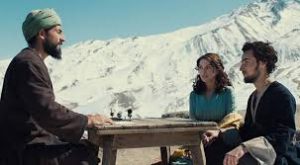 Published in 1937, it was the book written under the pseudonym Kurba Said, that captured the producer’s heart and imagination. He had to turn this into a film!

Thykier knew the perfect person to adapt it, the Dangerous Liaisons screenwriter, Christopher Hampton. Hampton was up for the challenge, which would find him adapting a much fuller role for Nino, a female who could equal Ali in intelligence and presence.

To enable the pair to really get a feel for the Baku and the neighbouring regions Thykier and Hampton went on a thorough recce of the locations. The decision to film in the original places definitely paid off, as it creates a much more immersive experience for the audience.

The city we’ll see is cosmopolitan and opulent, because of the abundance of oil. It is unsettling to see how greed over oil was as much of a motivation to insight turbulent times then, as it is now.

An interesting fact is that Baku has no film industry, therefore during the 11 week shoot the filmmakers were unable to tap into the benefits of locally sourced crews and filmmaking amenities, which added to the challenges.

It may feel like an unusual choice to approach a documentary director to helm the project, but Asif Kapadia does do justice to the story, and was able to draw two impeccable performances from the star-crossed lovers, Adam Bakri as Ali, and María Valverde as Nino.

Ali and Nino may be a period drama, but its themes of acceptance are as relevant today, as they have ever been.

Ali and Nino may be a period drama, but its themes of acceptance are as relevant today, as they have ever been