Expect some witty tête-à-tête as two reluctant wedding attendees are coupled up for a weekend destination wedding. Clearly on the outside the festivities the pair become unlikely companions and through their discomfort build a unique rapport.

Having been invited to one destination wedding too many, director Victor Levin was inspired to write a story that holds a mirror up to these occasions, revealing an interesting observation that for some, weddings are not the blissful celebrations they’re expected to be.

Enter Frank (Keanu Reeves) and Lindsay (Winona Ryder) obliged to attend a destination wedding in California’s most romantic wine country. Frank is the estranged half-brother of the groom and Lindsay the groom’s ex-fiancé, this scenario totally lends itself to comedy gold and it does.

Both are middle-aged and a little socially awkward, Lindsay is slightly priggish with a tendency to wear her heart on her sleeve, Frank logical, dry witted and emotionally disassociated. With an equal abundance of intelligence and opposing ethos’ allows for much banter and quick quips rallying back and forth. 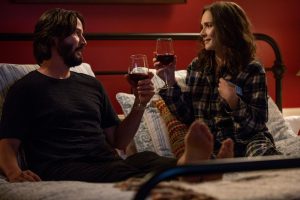 With dialogue from only our protagonists, this two-hander would make a perfect play. It also amplifies the feeling of isolation that the pair encounter, as they are very much on the periphery of the weekend jubilations.

With this brings one of many unique attributes to the film, the opportunity for actors to really engage with long but timely rhythmically rich dialogue heavy scenes, allowing these two Hollywood giants to really bounce off one another and enjoy the freedom to play with phrasing of this precisely written screenplay.

Shot in nine days, there is a lot of on-screen chemistry between Reeves and Ryder, who were an on-screen couple back in 1992 as Jonathan Harker and Mina Murray in the sumptuous Bram Stoker’s Dracula directed by Francis Ford Coppola.

In recent years we have seen Keanu Reeves deliver killer performances, but economic when it comes to dialogue. Here we witness just how adaptable an actor he is in this very naturalistic portrayal of the razor sharp witted Frank.

In contrast Winona Ryder delivers a less contained portrayal of Lindsay,  yet delicately demonstrating a person who desperately wants to be loved, who perhaps feels she is somehow unworthy of it.

Indeed both actors who could easily steel a scene, extend their generosity and professionalism to one another by delivering nuanced, balanced and highly entertaining performances. 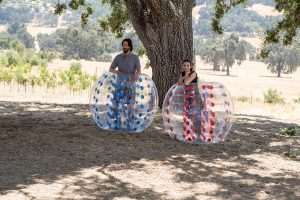 And so thrown together to partner up for the weekends activities laid on by the wedding party the pair form an unlikely alliance. But there is nothing like a near death experience to make one question one’s own mortality and react with our most basic of instincts!

On a deeper level I appreciated how the story demonstrates that the pain of love and life experience can manifest in many forms, resulting in our building defence mechanisms to facilitate our need for self-preservation.

The use of locked off shots allowed the audience to simply observe two great actors at work, and to get swept away with a charming story containing lots of laughs, in the most idyllic location.

Destination Wedding is a clever reflection of love, life and a philosophy of two people with two contrasting points of view. As the saying goes opposites attract, but for Frank and Lindsay will it have a lasting impact?!

“Get swept away with a charming story containing lots of laughs, in the most idyllic location."

Pennywise: The Story of It – Review