The power of communication and human connection are the interrelated themes explored in three short stories presented by director Dominic Dromgoole in the screen adaptation of the renowned Robert Holman’s play, Making Noise Quietly.

In this world of virtual interaction Making Noise Quietly demonstrates the power of one to one communication between individuals inhabiting the same physical space.

The film adapted from the Robert Holman play of the same name comprises of three individual short stories. Though each are independent of the other, themes do interrelate. War is one common denominator; second, all individuals inhabiting each scene are strangers. However as you peel back the layers, this character study will demonstrate so much more.

The first story is set in 1944 Kent during World War II, story two is set in an English seaside town in 1982 amidst the Falkland’s War and the final story is set in the Black Forest, Germany 1996 in which the residue of more than one war will reveal itself, not discounting one’s own inner conflict. 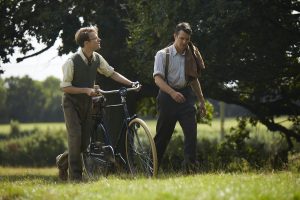 The film does benefit from its surroundings and successfully captures their respective eras. But this is very much an actor’s piece as the film’s real emphasis lies in human interaction, connection, our ability to listen, observe, and how we instinctively react in unique situations.

Acceptance, kindness and compassion are a few of the many themes that are explored in the film. Can a chance encounter with a stranger help us to find self-realisation, solace or heal?

Theatre director Dominic Dromgoole makes his feature film debut, and perhaps adapting a play was the natural first step into movie making. And although through film we benefit from a more intimate portrayal, compared to theatre, the film does feel like a safe translation from stage to screen.

The actor’s interaction and delivery did feel very much like a piece of theatre. That being said each performance did engage and in a very short space of time captures your investment, in the characters, story and its trajectory.

I’m very much in favour of theatre directors transitioning to film, they firmly invest in story, characters and allow actors to really work their magic, so look forward to watching Dromgoole’s evolution as a filmmaker. 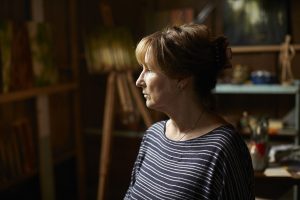 “Acceptance, kindness and compassion are a few of the many themes that are explored in Making Noise Quietly."