Having found the documentary Mystify: Michael Hutchence a truly rewarding watch Claire Bueno knew she was gonna have a 'Good Time' interviewing director Richard Lowenstein finding out 'What You Need' about the enigmatic INXS front man.

Richard Lowenstein has worked with bands such as U2 and Crowded House and most notably INXS. He directed a wealth of their music videos including Mystify, Suicide Blonde, New Sensation and Need You Tonight  and through this the Australian born director forged a strong relationship with 80s rock band.

Fronted by Michael Hutchence, his luscious curly hair, slender frame, unique style and complete animal magnetism captivated audiences and certainly helped catapult INXS to global superstardom. But by 1997 at the age of 37 the singer-songwriter would be found in a hotel room, his death shrouded in mystery.

The latter part of Hutchence’s life were turbulent times and to date his life story has not been accurately represented. And so 20 years after his death, Lowenstein and a few of Michael’s closest friends felt it was time to set the record straight.

“So there’s this inner sanctum of 10 to 15 really close friends who knew him very well over the years in different periods, and so the point I was trying to make. We all knew him quite intimately and as a person and socialising, and obviously the girlfriends knew him intimately. And so the 20 years go by and basically there’s nothing that’s made, documentary, drama. There’s documentaries made of course, there’ dramas, a mini-series was made in Australia, but nothing that you know, the core gang of us actually saw, anything we could recognise. We didn’t recognise the portrayals that were being put on, you know the loose rock star, the bad boy of rock and roll and everything, he kinda wasn’t you know (laughs), he was the most gentle rock star behind the scenes.”

The documentary clearly demonstrates Michael Hutchence’s magnetism, you barely dare blink because he is so captivating to watch and I wondered whether that had always been the case. 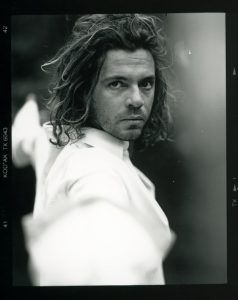 “Yes, well it sort of hit me as soon as I started working with him you know. It’s like I had been doing sort of music videos and I made a feature film back then in ’84, and you know a lot of the pop bands of the era and the singers might have been good on stage and a lot of posing was happening, but that magnetism that you see in Michael wasn’t necessarily there. And we got asked to do this job and that was the first thing that hits you, the first thing when he meets you is this just loose cat-like magnetism, and then you put a camera on that and you go ooooh Jesus, you know (laughs).

The media always liked to hype up a bad-boy image of the rock star, Lowenstein laughs as he shares an anecdote refuting the stereotype.

“I remember once in a hotel, in somewhere ridiculous you know, a motel in Australia and we were sort of joking about that cliché and going, ‘we should really throw this TV out the window if we’re gonna live the legend, aren’t we.’ So we’re both trying to lift the TV chained to the wall, you know, going it’s like a scene out of Ozzy Osbourne and going. ‘Ahh this is too much trouble let’s just sit down and talk about art and politics.’ (Laughs) and we put the TV down. That was our career highlight of loose rock-stardom.”

Michael would laugh at the stereotype and thought it funny, but latterly his relationship with UK TV presenter Paula Yates and wife of Bob Geldoff would result in this image having a damaging effect.

“It sort of became prison for him, especially in the later years in London, it literally is this swirling mess of fleet street sort of tabloid press, who sort of took that architype which we thought was such a joke and put him in this prison of this long haired guy steeling our saint, you know she was almost like this First Lady almost of rock ‘n rolldom and it hit every headline and the legacy was sort of tainted by that.”

“He was the most gentle rock star behind the scenes." Richard Lowenstein

Driving the narrative are intimate revelatory interviews with Hutchence’s friends, family and ex-lovers.

“I would say 90% of the people I knew personally through my working with Michael so, Chris Thomas the iconic record producer, Kylie, Helena, the first major girlfriend Michelle Bennett, these are all friends. So I would sit them down in a recording studio, or sometimes just in their spare bedroom, or somewhere quiet. I would travel with my portable equipment and say. ‘Let’s go out the back.’ and they’d sit there and in a kinda darkened room and we would talk like friends, and there’d be microphones like a radio interview. And when there’s no extra people you know, the sound guy, the focus guy, when there’s no extra people they’ll just talk to you and soon as that started I knew that was the intimacy that I wanted, I didn’t want you know, rigid people who had made themselves look good, their Sunday best for the camera sitting there going, ‘yes I knew Michael, as he was good.” But I wanted them to tell me about when he was crying, when he was troubled, and so the guard went down. But I do think it was only because I knew them, or in the few cases with the people I didn’t know, they heard that I was trustworthy and they could let their guard down, they would be safe.”

Enriching the documentary is a treasure trove of archive material much of which was recorded by Hutchence.

“I sat there at the start and I thought how the hell are we going to find this footage, I mean I knew he always had a video camera, but then the tape he would give to someone, or give to his dad, or give to his partner and you know there was definitely filming going on in the final years too, and that would have been at Paula’s house.”

The beauty of documentary filmmaking is its organic nature, little did Lowenstein know that Hutchence old flame Kylie Minogue would put him on the trail of couple’s personal archive.

“It’s like Kylie in the middle of her interview goes, ‘I’ve got all these tapes, my brother has just been digitizing all my home movies, and err, and look at what we’ve got.’ And I thought she was just showing them to me cos I never thought Kylie would say, here you go and then she goes and gives them me. And there’s this one remarkable story where she’s talking about the first date, and she says, ‘and we was on a boat in Hong Kong and we went there and Michael was filming, but he was filming on a 16mm hand held camera,’ and I said, ‘I bought him that camera, so where would the film be Kylie?’ She says, ‘I have no idea, maybe it’s with that dodgy accountant maybe.’ Anyway I knew I had an attic with all these outtakes  of the music videos, which I just assumed were him miming the song, and I could use them so, but they are going to be him miming the song, so I sent them all off in a big truck to the laboratory and then one day the laboratory rings up and  says ‘you’ve got 20 minutes of Michael and Kylie on a boat here, in 16 mm you know, which is incredibly good quality,’ and er I’m going, ‘you kidding? How did that get there?’ They say, “we have no idea, it’s just marked Max Q video 1 or something.’ And then it sort of came back to me that he’d arrived on that video shoot with a whole box of little Kodak, little yellow films 100 ft. 3 minutes each. And he’d given to me, so he didn’t have to pay for it and I didn’t have to pay for it. I marked them down as Max Q rushes so we just got them, didn’t use them gave him a video cassette and they just sat there in the tin boxes in my attic because I’m a bit of a hoarder for 30 years, but it’s marked Max Q, so I then 30 years later of course go Max Q that’s gonna be rushes and it’s not, so thank God we did that.”

Told non-linearly Lowenstein explained how they began to formulate a workflow to structure the film.

“The biggest problem I had was starting the film. How do you tell an audience who have most likely forgotten who the hell this person is, you can’t rely on them knowing, how do you tell them, how do you establish in the first 10 minutes who he is. And that’s where that Wembley footage was a gold mine cos it’s sort of like, you know without knowing who he is, you see this character walk out and you see Wembley and you go, ‘that’s who he is,’ and then now let’s go and find out about the person.” 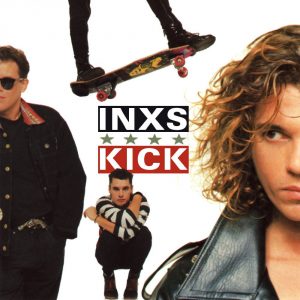 When making a documentary particularly about a band, acquiring the music rights is always going to have to be taken into consideration and Hutchence’s estate is complex, but Lowenstein was not about to compromise. Thankfully Heavenly Hiraani Tiger Lily Hutchence Geldof, Hutchence only daughter came to the rescue.

“Well it’s expensive you know. And it’s a problem, it was only after Tiger’s intervention that we could access the INXS material because we’d come to blows, metaphorical blows with the band management, because they wanted right of final cut and I wasn’t prepared to give them that because I wasn’t prepared for them just to sell back catalogue. I wanted the true story of all the music he was involved with and not having to put up with any censorship, so we didn’t have the music for a start and then we didn’t have that Wembley footage and then Tiger saw it and she gave her vote of approval and then they all, band management were just forced to cave and we got the nine songs. I wish there was a bit more of INXS music, but as you said with the licensing its you know, MTV is incredibly expensive, anything where you see footage is not yours, (laughs) that’s real expensive so we did need quite a large budget and that’s why we needed the BBC and Screen Australia.

Mystify: Michael Hutchence is a remarkably honest, haunting documentary which pays a fitting tribute to a hard-working, committed, sensitive human being who was much more than a person who lived his life IN-XS.