On Monday 7th October, 2019 CLEANIN' UP THE TOWN: Remembering Ghostbusters, the definitive retrospective documentary charting the making of the original 1984 Ghostbusters premiered at the Globe Cinema, Calgary, Canada as an Off-the-Cuff screening, part of the Calgary Underground Film Festival.

All photography with thanks to Caitlind R. C. Brown.

Ghostbusters Documentary Cleans Up in Calgary for a Premiere Screening

12 years in the making and there has been much anticipation for the Ghostbusters documentary that promises to provide insight into how the ’84 film starring Dan Aykroyd, Harold Ramis, Bill Murray, Ernie Hudson and Sigourney Weaver was made. The pressure has been on for CLEANIN’ UP THE TOWN: Remembering Ghostbusters to be THE definitive documentary about the science fiction / horror / comedy which became a global phenomenon.  I know the pressure has been on because I, along with my brother, Premiere Scene’s skilful cameraman and editor have been the filmmakers behind its inception, evolution and completion.

It’s been a rewarding but difficult journey to get to the point where it is finished and ready to present to an audience.

With Jason Reitman’s Ghostbusters having just wrapped in Calgary, Canada, there has been much excitement amongst the local community, not just because of the employment opportunities, but that there is a Hollywood movie shooting in their town! And to celebrate the momentous occasion Calgary Underground Film Festival (CUFF) hosted an Off-The-Cuff screening of the documentary in which Anthony and I were invited to attend.

We humbly accepted the invitation and took our first journey to Canada. Joined by the doc’s Archive Producer and Motion Graphics Editor Derek Osborn who travelled from the United States, the three of us were very excited and admittedly a little anxious about sharing the film with its first public screening. 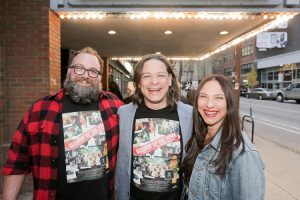 “After over 10 years of work, it’s nerve-racking to say the least, showing the film to an audience,” says director Anthony Bueno, who has loved the original film since childhood.

As we turned the corner, approached the Globe Cinema, we were instantly disarmed as we were enthusiastically greeted by the Alberta Ghostbusters all dressed in full costumes, eager with anticipation and using the ideal opportunity to raise money for Alberta Children's Hospital Foundation.

Having lots of photo opportunities and chatting with people who had dragged themselves out on a crisp, cold Monday evening, October 7th 2019 was the night to show the film to the world!

Anthony and I introduced the doc which we felt was better kept short – people had waited long enough! We took our seats, the lights dimmed and watched the company logo appear on screen …. And we were off!

“After over 10 years of work, it’s nerve-racking to say the least, showing the film to an audience." - Anthony Bueno

“There’s no life like making movies.” To quote Dan Aykroyd from the film. And now we truly know why. It is a unique experience sitting there for the first time with strangers, watching something that you have loved and laboured over, yet not knowing how they are going to react. But sitting there witnessing how they viscerally responded, laughing at all the funny moments, gasping at the more dramatic ones, totally committed. It’s remarkably and incredibly fullfilling. I found myself looking at Anthony who was brimming with pride; we’ve done a good job.

As the credits roll, the audience cheered and applauded as we were welcomed back on stage for a Q&A hosted by Ghostbusters Interdimensional Crossrip’s Christopher Stewart. He latterly reflected: “It flows so smoothly and is so full of great material, it’s as much fun as watching Ghostbusters itself. The perfect primer for new fans while still full of surprises for long-time fans like me.”

It was so rewarding to take questions from the audience and share some of our highlights, such as the special time spent with the wonderful Harold Ramis, and visiting locations such as Industrial Light and Magic and Pixar for our forthcoming documentary Too Hot To Handle: Remembering Ghostbusters II. 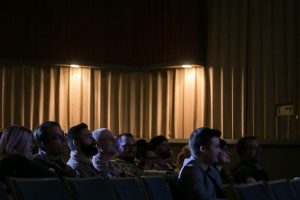 We have always been grateful to the Kickstarter backers who helped us over a financial hurdle three years ago and we couldn’t have been more over joyed with the response one of our Executive Producers Brandon Schoolcraft: “Cleanin’ Up the Town exceeded all expectations. The crowd was legitimately blown away discovering that, even after 35 years, there is still more to the ‘Ghostbusters’ story that has never been heard before.”

Jordan Hayes from the Alberta Ghostbusters commented on Facebook: “Few days ago our illustrious city Calgary had the privilege to see ‘Cleaning Up the town: Remembering Ghostbusters’ a Ghostbusters in-depth documentary on the process and challenges of the development of the 1984 film. Personally I have spent countless hours looking up what little there is about the making and development on YouTube and bonus features. Finally the film is here to answer all. He continued: “For all Ghostheads / Fans this will be a film that is everything expected and more.”

Anthony, Derek and I were so overwhelmed by the response and hospitality of the Calgarians, we couldn’t be more grateful. Derek reminisced: “I’m having a tough time imagining a better situation for seeing the doc with an audience for the first time. The audience reacting at the right things (for the right reasons) really melted away my blanket of stress.”

CLEANIN’ UP THE TOWN: Remembering Ghostbusters continues to screen in Canadian Cinemas, October 27th and 30th Metro Cinema Edmonton and at the Mayfair Theatre Ottowa  on November 2nd   and 3rd.

And so for the final words from the producer: “We love this town!” 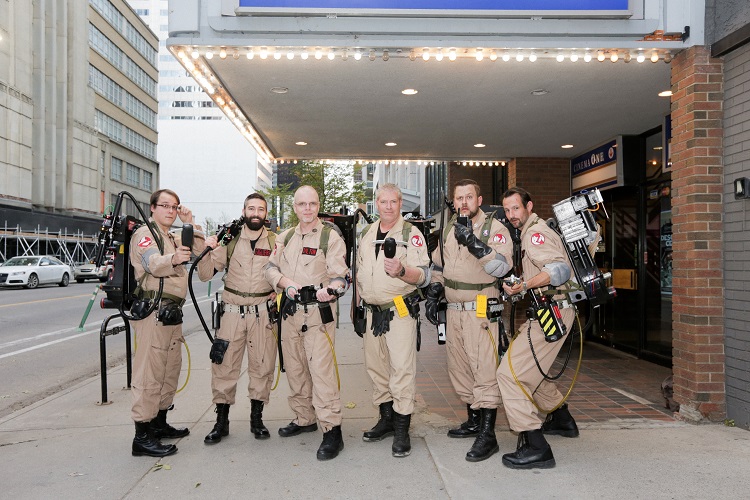 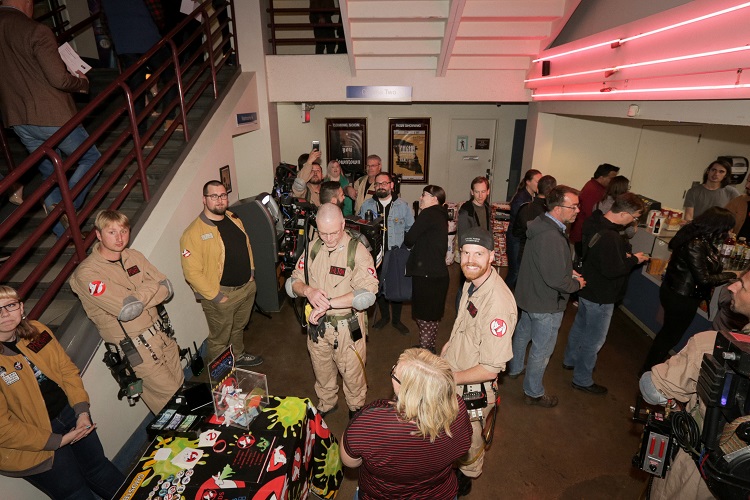 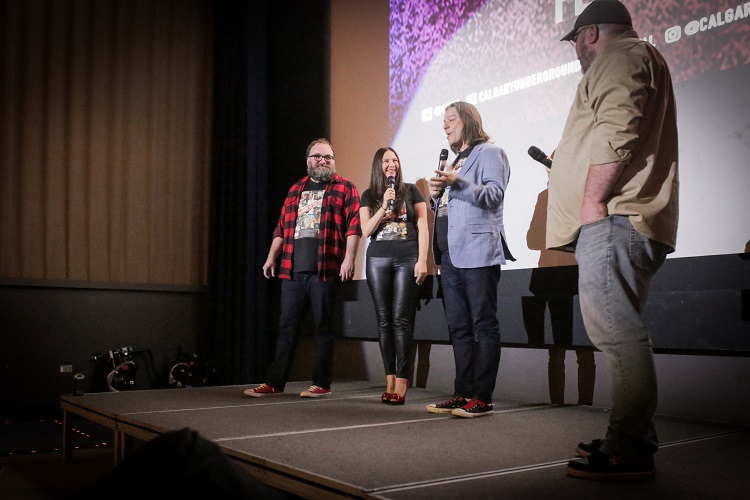 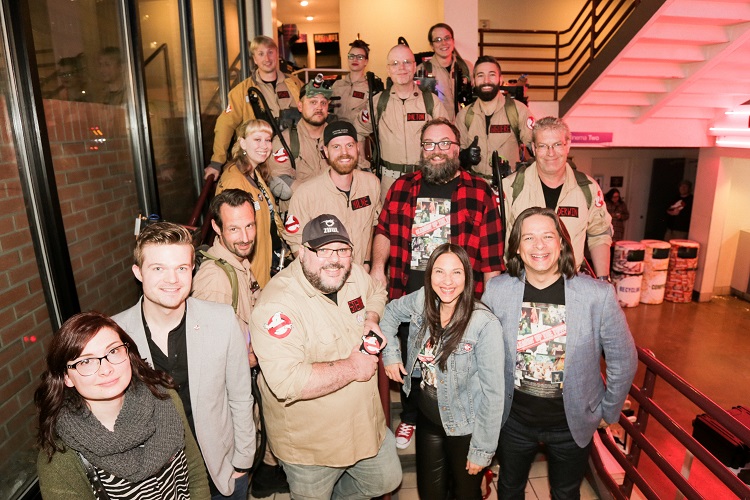