Portraying the lead character Beatrix in Netflix’s much anticipated Fate: The Winx Saga Sadie Soverall is electric! For the demure young actress the part of a sassy, troublemaking fairy, I learned was too tempting to resist. 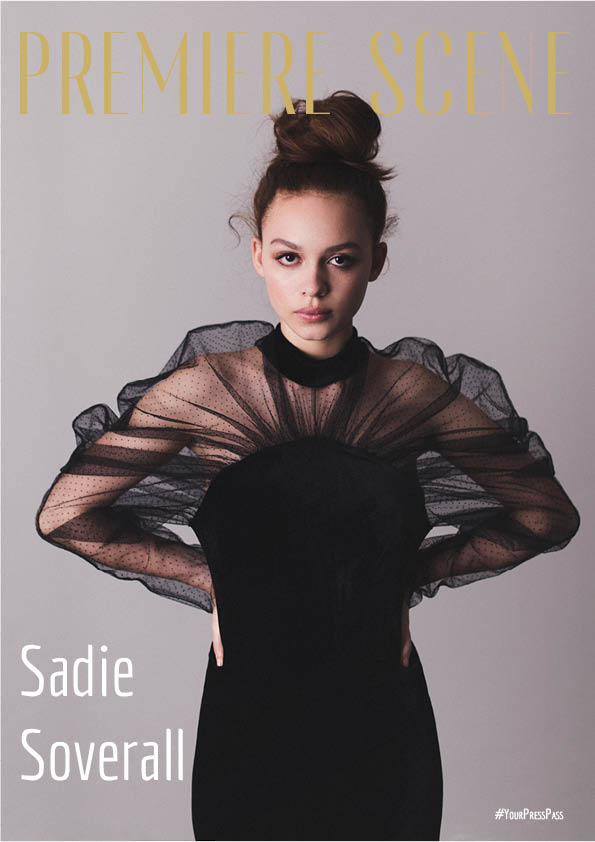 For an actor it is all about the story and I wondered what it was it about Fate: The Winx Saga that attracted you to it?

I think the character that I was playing, I think it’s so nice in your career when you get those auditions come through and you just know exactly how you’re going to play that character, like you just have an immediate connection. And I think I just saw the character and she was just so fun and I could just play with her and I think that really attracted me. And also it’s a story that’s about five friends coming together and navigating friendships and love and all the normal stuff, while also like dealing with magic and all this other world craziness. So it’s kind of a story that really intrigued me and kind of resonated with me cos all of the characters find themselves at some point in it.

You’re playing a fairy with magical powers, so for any actor young or old it’s an opportunity you just can’t turn down?

Yeah, exactly, exactly it was so much fun play with her and the magic and the powers.

Beatrix is a little bit of a troublemaker, which must be really fun to play, but also quite often the baddies I suppose are more interesting for actors to play, you’ve probably got a bit more of a backstory to play with, we’re not all born bad, we evolve. So was that something that attracted you as well?

Oh yeah, that was something that I could really sink my teeth into with Beatrix and just figuring out why she is the way she is. I hope that if there is a season two that’s kind of explored more because I’d love to know. But it is really fun play a character who just the most wily and most cunning in the room. And playing someone so different from yourself as well is really an interesting way to kind of escape and live a different life in an completely different way, it’s so fun.

You started your acting life in theatre, so how has moving from theatre to film, how has that transition been because film, TV and acting for camera is very technical?

Yeah, yeah. No it’s really interesting I love every medium of acting, you know I think there are incredible things about theatre and there are incredible things about TV and film. I love also with film, one thing I really liked, the fact that everything is so immersive, cos everything has to be in front of the camera. You are putting on a full costume and make-up that has to be so precise and so right up to the lens, and the sets were incredible to explore. I really loved going round Dowling’s office and looking at the detail, it was amazing. 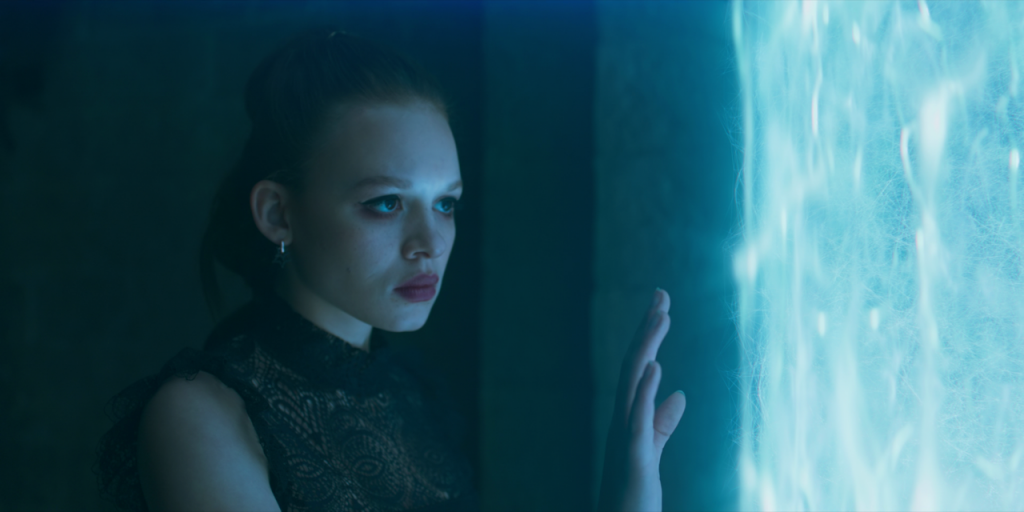 Because film is made in a non-linear way as opposed to theatre where you obviously follow the whole arc of the story from beginning to end in one sitting. How did you prepare for that discontinuity of filming?

It was something that was quite difficult, you have to really be on your toes, make a schedule of the scenes so you know the overview of what was going to happen in the day. I think preparation is really important when it comes to things like that, you know. Reading over your script loads of times and just going into the world, kind of inhabiting the character is really important before. It’s something that definitely keeps you on your toes. But it was a really fun challenge, I really just enjoyed it all.

Did you know the whole arc of the story so you knew where the motivation of your character was going to? Or were you just given your script episodic?

We kind of knew the whole story before because we were lucky enough to get all the scripts before and kind of read them and indulge in them and we shot it on a two episode basis in the blocks which is how it is usually done isn’t it. So yeah so it was nice to know where everything was ending up. 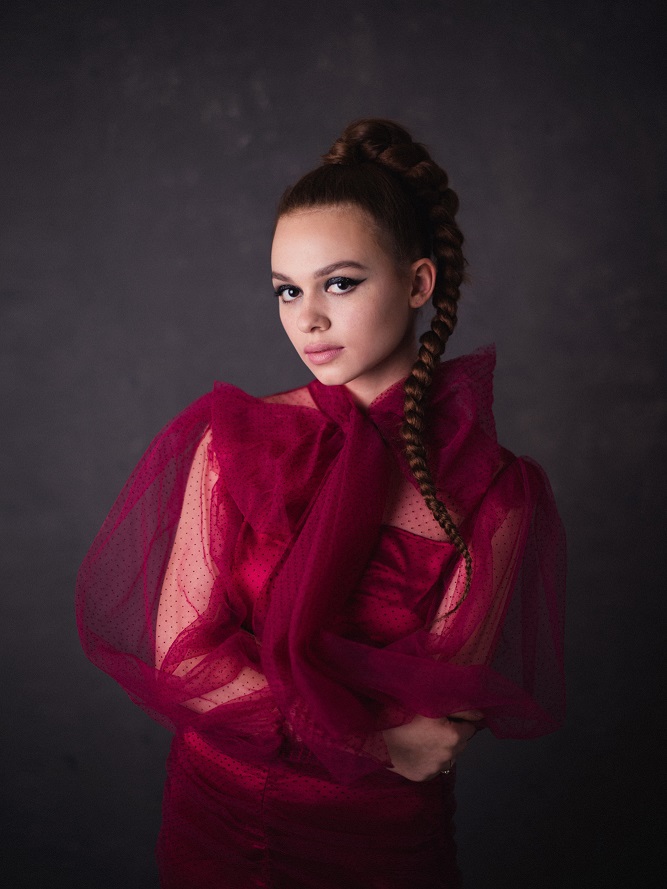 The beauty of long form story telling is that you have time. So is it really nice filming this series where you’ve got much time to explore Beatrix and the character and have more time with each storyline as well?

Certainly, I think I was kind of the exception from that because I was still at school and I was filming, so it was very stressful in the sense that I didn’t actually have a lot of time, and I was kind of one world at school one minute, and then on set the next minute. Kind of living my dreams so, it was quite crunch time for me, but I love a challenge and I love pressure and I think I work quite well under it. So it was a fun challenge, I think the time is also very nice we had on set, we got to rehearse and fully be able to get into our characters which was really useful and really nice.

Yeah, it was so nice. I think it’s fun being a character who is also horrible one minute and then the next you’re laughing over a cup of tea. I think all the girls stayed together in the same apartment block so we were all really close, everyone was really close. It was really was just lovely working with such a great group of people who are so talented.

What was it like working with costume? As much as you prepare for character and you know it inside out, then you are working with people in wardrobe that have their ideas with how your character should be dressed. Was that a collaboration with wardrobe?

Oh definitely I think I really loved all my outfits for Beatrix, they were really fun and I like the way that they were so clean cut and had really strong silhouettes, I thought that was exactly what she would pick. And I think also you have to collaborate, even if you didn’t like them (the clothes), you would have to find a reason why they’d wear that, which is a really fun challenge to do. But I really didn’t have any issues with it I absolutely loved all the clothes, they were gorgeous.

“It’s fun being a character who is also horrible, one minute and then the next you’re laughing over a cup of tea.”

You said that Beatrix is so much different of a different personality to you. When you are playing a character like that is difficult to let go of it at the end of the shooting day? Or does she stay with you?

And finally, when it comes to making this series which must have been a huge learning curve for you, what lessons have you learned from being on the show that you can take forward with you and what can you say to inspire other young actresses?

I think what I have learned from doing the show was one, how much I love it, I’m so, so lucky to be able to work that doesn’t feel like work. And two, I think I’ve learned a lot about resilience and that if I can withstand being at school in my final year of A-levels and being in a Netflix show that I can kind of do anything, it think I’ve gained a lot of confidence in myself. And I think to inspire others that if you have a dream please go for it. I never thought in a million years, younger me would be here, it’s crazy. You have to go for your dreams, you only have one life, so please chase them.

Sadie Soverall stars in Fate: The Winx Saga.  All episodes available on Netflix from the 22nd of January

With special thanks to Personal PR