Coming of age story as socially awkward, 17 year old AJ reluctantly joins her family for a holiday Dorset. Not usually much of a joiner, will a chance encounter with free-spirited lifeguard Isla, be a case of opposites attract?

It always about the script when it comes to acting. So what was it about the story that you connected with?

Yes, it always does start with the script, I think you’re absolutely right Claire. I think that the thing that really stood out was Marley’s really brilliant dialogue, ‘cause she really does write very, very, very good dialogue. And actually when you do have good writing it does make your job as an actor a lot easier. So I just remember when I approached the scenes I found it really, really enjoyable. So the dialogue was fantastic and I think the character description as well of AJ. Because Marley was very specific in the script about what AJ looked like, and what she was doing, and I think when I read the description I was always kinda hooked. I was kinda like, who is this person? How can I interpret her? I kinda wanted to attempt it (laughs).

‘Cause AJ is a character that is very much... She’s kinda socially awkward, she’s 17 and she’s come out and what I can see from the costume and everything she’s hiding behind the sunglasses and everything. So was that interesting for you to play a part where you have to keep everything enclosed?

It was actually, it’s interesting to play a character who doesn’t want to be seen or looked at, because it’s quite a strange experience I suppose because as an actor you’re being filmed and you are having to offer a certain amount of emotion or convey a sense of what they are thinking. It was quite tricky I guess because AJ doesn’t want to be seen, and she wears all this clothing, and I loved Marley’s idea of the glasses because it creates the separation between her and everything else, so I think it was a challenge but it was a really, erm I think it actually helped. It taught me a lot actually.

It’s very much a coming of age story isn’t it, is that how you saw the story as a whole?

Yeah absolutely. I think it’s a queer film but that’s not important, sorry that sounds ridiculous. It is important in the sense that it is just a love story and I think Marley very much wanted it to be just a story for everyone. I think AJ not having not come out already, it’s not about that, it’s not about a trauma, and I think that was quite refreshing to tell a story, to show young audiences and young LGBT audiences in particular that these stories don’t always have to end in such a sort of destructive way. And actually it’s not a real depiction I think of what people need to see. 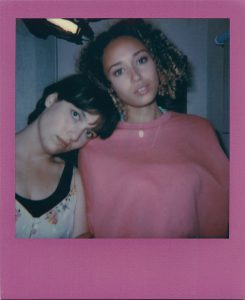 Yeah and I think what makes AJ relatable is that yes she is a lesbian, but I think all of us when we were teenagers that whole awkwardness again of just being attracted to somebody and not knowing if they’re attracted to you back, whether you’re straight or gay, that’s immaterial. We all kind of know what it’s like to be trepidatious and we don’t know if our feelings are reciprocated or not.

Absolutely, like putting yourself out there and I think one of the ways that I really did feel connected to AJ and her age and her emotions. It was like her intensity of feeling and her intensity in how she views other people and relationships, and remembering that feeling that when I really liked someone when I was probably about 16, just so infatuated by them and it was such an intense feeling and that was all that really mattered. And now there’s all these other things in life, but back then that was just the important thing and you wanted that person so badly. I’m so glad I’m not a 16 year old anymore actually (laughs).

And I think what helps us as an audience as well connect to AJ is that we’ve got this internal monologue, so we are definitely on that journey with her and was that kind of nice for you as an actor to help guide us through and endear to her even more?

I think it was a very clever decision of Marley’s to do it as it shows AJ’s inner life. And I think that what it means as well you are getting two versions of her as the same time. Because I think if you just had AJ without the voiceover, I don’t know maybe it would be slightly, it could maybe get a bit exhausting because all you’re seeing is how AJ presents herself to everyone else. And so those private thoughts I thought were really smart of Marley to do that. 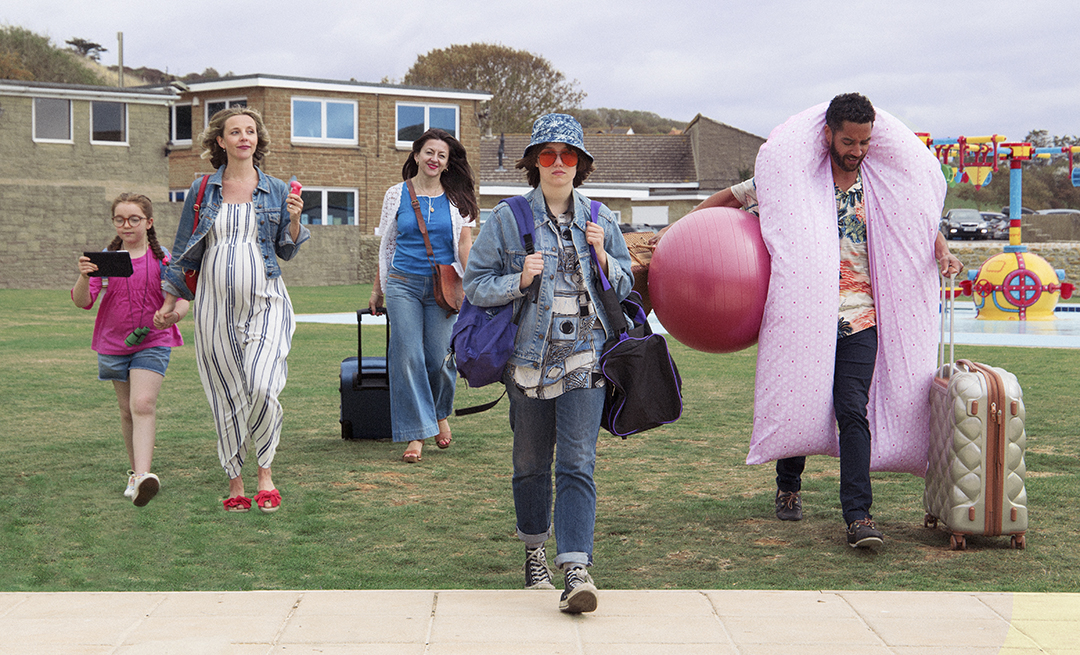 “I think that was quite refreshing to tell a story, to show young audiences and young LGBT audiences in particular that these stories don’t always have to end in such a sort of destructive way."

Absolutely, and it’s a lovely family drama as well, and you are working with some great actors there aren’t you?

Yeah, oh my God. I really couldn’t believe it actually. Like Sophia Di Martino and Jo (Hartley) and Samuel Anderson and Ella-Rae (Smith), I mean everyone Steffan (Cennydd) I mean everyone. The whole cast are so professional and experienced and intelligent, and just watching … We did a lot of improve as well and I learned a lot about improve from watching Jo and watching Soph, and what they do, and how they approach it. And oh yeah, I’ll never forget that (laughs).

Exactly, and this is your first leading role, so was that intimidating because everyone is looking to you, you’re the lead, you’re gonna set the tone for the day (laughs).

Yeah it was. I think one of the blessings, there were two things. One was that everyone was so nice on the crew and the cast, everyone. I couldn’t give you any example of any negativity, I mean it was just the loveliest, safest place. So for that reason it made my job a lot easier, and I felt a lot better about what I was doing, and how I was kinda living day to day, because obviously we were living on set and was very closed. And I think the other thing as well was that I didn’t really have any time to kind of think too hard about the big job I had in a way, because we had two weeks prep which was great, thank God. So I just threw myself into the work and then we were just straight on then and because it was such a low budget film and it was only shot in three weeks, the turnaround was so quick that you didn’t really have time to like, stop and go, “Oh God.” There was definitely points of that and feeling, “Oh no.” I don’t know if what I am doing is right or wrong, but basically everything happened so quickly all the time, that you just had to get on with it.

You said it was a great experience working with Marley the director, because she has written and directed it, for you as an actor does that help you because, you haven’t just the director’s vision, but you have the writers too, which is also a luxury. So collaborating with her and having somebody who knows this character inside out. Was that a great opportunity for collaboration as well?

Definitely. I think so because AJ is a version of Marley I think, from when Marley was younger. So questions I had, just to open up that world I suppose I could just fire it off to Marley over What’s App and she’d be like, “Oh yeah she’d have done that.” I mean something really small,  AJ’s birthday is Marley’s birthday that sounds mad, because obviously AJ is not real, Marley’s birthday is in October, but it’s just stuff like that. I felt that Marley was kind of, just this endless source of information and it was a luxury actually because I think, not a lot of the time, what would I know, but I’m assuming quite often when someone has a character the director is like, “I don’t know, you decide.” Which is fine as well, but I think because it was so close to Marley I got to have a more help.

And with regards to the film as a whole are you hoping that it will be almost like a social commentary in the sense, that you hope that other young girls in that situation, it might encourage them to talk more and be more open about their feelings and enter into a dialogue with family, because AJ has a supportive family.

Yeah she does and I think it is not a big deal. Which I think is what the film has been designed to do, is to show young girls particularly, that you can get the girl and I know that I have already said this. Like Marley was very influenced by John Hughes films, but when she was growing up all the films about lesbians ended in disaster and trauma and death. And actually she’s showing girls that there are characters on screen that can reflect them. And that are just average kids from Dunstable that are gay and want to experiment. It’s not the end of the world and that’s a hugely important thing to see on screen I think. 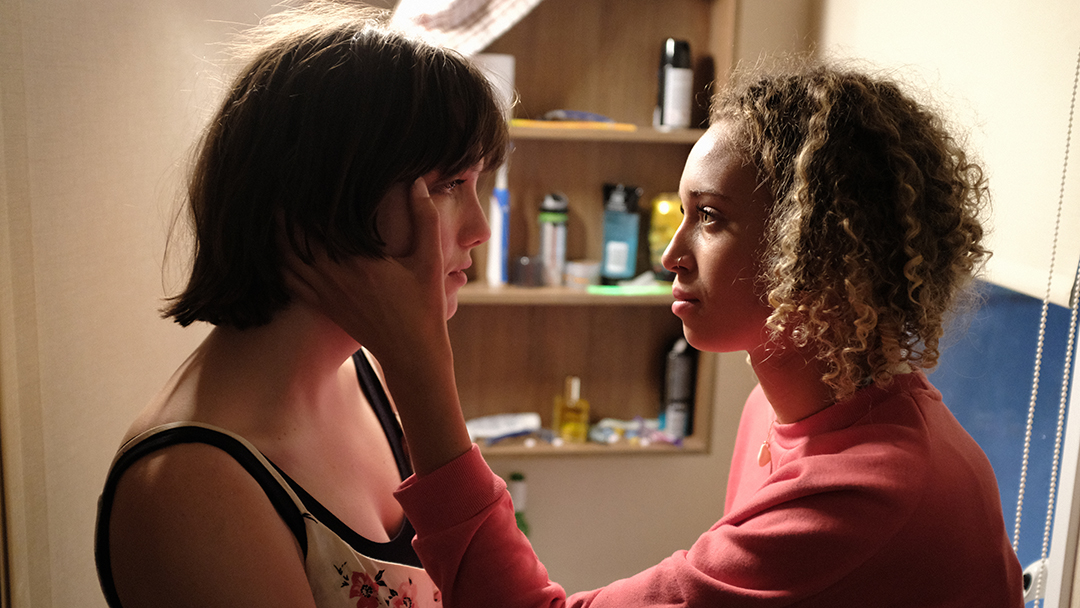 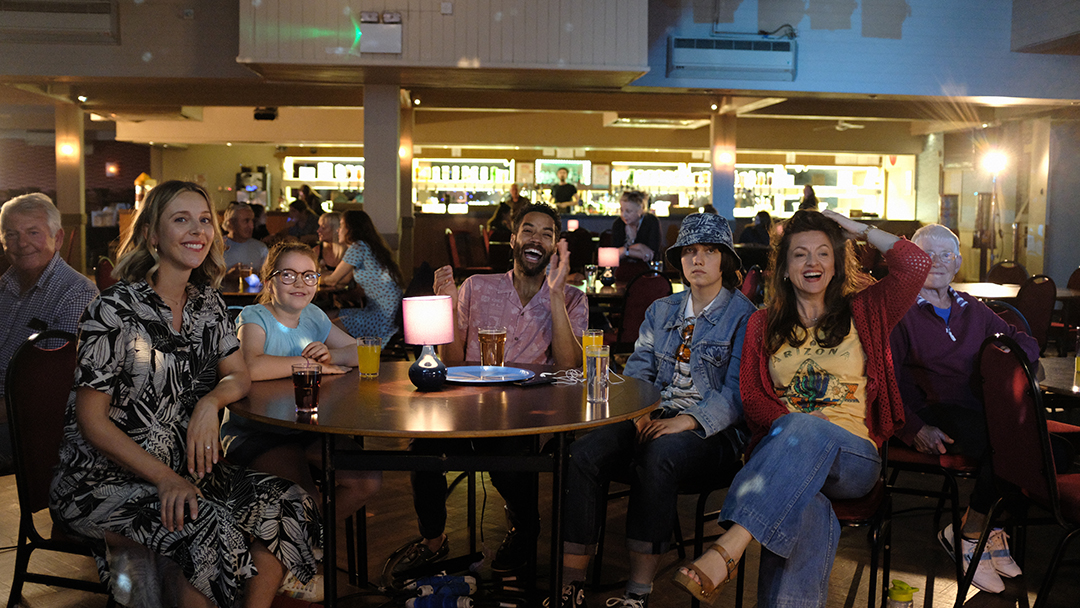