A dream for any actor is the opportunity to portray a part that gives them the ability to portray a layered, three dimensional character that allows the actor to really display their versatility and for actress Danielle Deadwyler the part of Lemon Cassidy in The Devil to Pay did exactly that. Filmmakers Lane and Ruckus Skye set their story in the lawless Appalachian Mountains as we compellingly follow Lemon as she is set a near impossible task in order to save her son. Playing challenging roles may not be new for The Harder They Fall actress, but this does not stop her delivering a fresh, nuanced, captivating performance that will have you rooting deeper than an ancient sycamore. I was lucky enough to chat to the effervescent star who leads this film with real gusto.

I have to say I loved watching this because Lemon, she is an absolute tigress.

(Laughs) I love that. She’s a reluctant tiger mom in that way, you know? We know about tiger mothers being aggressive and trying to make their child be this thing in modern society, but no this is the other end, this is, I want to just nurture my child and be the best and then that is compromised, so then I have to be ruthless.

I believe the script was written for you which must be hugely flattering and then to open up the pages and see a character with such a range and so many depths, must have been such a thrill?

I love Ruckus and Lane, we sat down maybe a year before they came to me with The Devil to Pay and we just talked as people, and talked about who we were, and I talked about what I like and what I dig into, and they talked about what they dig, and then a year later they came back, and they were like, ‘we got this.’ And I was like, ‘oh let’s do it.’ And then the ball rolled and we came and went to the mountains for four weeks in 2017 and made something strange and slow and challenging and it was completely utter fun (laughs).

We were all together in this house, it was the quintessential indie movie experience. It was beautiful, it’s what you want to do, you wanna get in the trenches with somebody, with people you dig and make something lovely and I think that’s what we did.

Yeah, I think because it is an indie film everyone is committed and everyone is gonna give 100% because everyone wants to make it work to create this story?

Yeah even down to our villainous people, which they aren’t villains they are people who are fucked up (laughs). Catherine (Dyer) and Jayson (Warner Smith) and Brad (Carter) and everyone. I don’t know if you know but my son played Coy. So it was literally a family affair in that we are deeply intimate in the making of it together.

I was going to ask you about making the film with your son that must have been a real joy?

It was weird at first. Because I operate in a place where my work is my work and my private life is this, it’s separate. Ruckus and Lane had asked if he wanted to do it because they wanted a particular kind of intimacy and we had done auditions with other kids, but there’s something about a real relationship, and that’s not necessary a guarantee on film because Ezra had never done anything at all. He had auditioned for some stuff but not like coming in and being on a set at certain times with a big ass red camera in your face, right? So I found that to be really inspiring and to be really beautiful to watch him, just to flow with everything, to be so flexible and to be so natural, outside of me being his mother, that’s a feat for a lot of people. And so it’s a beautiful thing to share and we’ll have for the rest of our lives. It will be like, we did this thing together, this bond and it’s anchored in this film and the showing of maternal love and kinship and the fight to survive and maintain your legacy. So it was really good, it was really, really, really good.

And matriarchy is a strong them in the film isn’t? It goes against the stereotype of what a matriarch is in relation to the Tommy Runion character played by Catherine Dyer, you think she’s sugar, but still waters run deep and she’s a nasty piece of work.

Yes we’ve got two matriarchs going head to head and one is oppressive and the other one is just trying to get by and has to learn to boil a bit hotter. Because Lemon doesn’t want to, Lemon is not seeking to be violent, Lemon is a bit more creative in her practise in that way and she finally has to say, I’m not giving anything away because people have got to see it. But until she finally has to wreck in in the most visceral way, the most raw way. The whole way through I think oppressed people in different situations people aren’t trying to be violent, they just want to survive, they just want to be at ease as much as possible, cos the life is hard, it’s a rigorous life to be in the mountains, to be in Appalachia. It’s a different communing with the land, it’s a different appreciation for what it means to work and so to put on top of that this taxation, this unjust taxation and to sugar coat it in biscuits and cake. No; it’s time to deal, it’s time to deal and that’s what happens (laughs). You know matriarchy can have its challenges as well, so it’s a question of power and how to navigate the space and how to reckon with oppressive forces in this very intimate micro experience.

And I think you touched upon it as well, a theme that emanates from the film is this sense of survival these people are having to do whatever it takes to survive.

Yeah and then on top of that the challenge of danger and death, this terroristic threat that this family unjustly puts upon her quadruples the need to survive and the kidnapping of the son, takes everything up a notch and so that’s the best drama (laughs).

“It was the quintessential indie movie experience. It was beautiful.”

And for you as an actor, how is that? Because she literally is having to be very resourceful, think on her feet, fight for her own and her son’s survival and so for you having to be in that headspace was it quite daunting for you, or quite draining?

I have the last few years have had me dealing with roles that require people who are in downtrodden spaces, mentally, emotionally, physically sometimes, it’s something that I’m strangely part of a lot, but it’s a very isolating experience to say the least. Especially in this dynamic she is in a world where she literally navigating alone, except in her community, the gentlemen in the beginning who’s like helping her with a few resources here and there. And she makes use of the community that is around who might not feel like community, act like community,  look like community but she is creative enough and smart enough to make the choice to navigate her world and her needs as much as she possibly can. And I think we’re we all doing that right, we are all in a space of how do we make do with what we’ve got and I think that the important part that we need to learn from Lemon is about community. She goes to these people who might have just a little bit to give, you know. I think that’s a huge lesson in the pandemic and it’s a huge lesson that Lemon enacts, when even though she thinks she is alone she’s lost one of the most vital people in her life, this is an ultimate trauma, however she begins to call forth the people that literally surround her, in order to survive.

Yeah exactly, you talked about space and for an actor space is very important. The film is set in the Appalachian Mountains and as a location it is absolutely stunning, and forms a character in its own right. To be immersed in that how did that aid your performance?

Oh my Goodness, it’s a quiet place, you are surrounded by life in North Georgia, I mean the Appalachian Mountains go far into North Georgia, into Tennessee, into I think it’s a little bit in the Carolinas and further up North Eastern US, but I mean it’s beautiful. It’s so interesting to be in a marvellous natural space and once the lights go out, it’s perilous, it’s dark; it’s extremely dark. There’s also a shadowiness and a need to mind the depths of the self, it’s also the notion of minding the shadow self. Lemon reckons with her dreams and what they are telling her and I think that is a very huge mythic, folkloric story telling in that people in general, but a lot of women storytelling is, ‘you have to go into the dark.’ Meaning you have to go into the unknown in order to pull up who you truly are, who you are yet to know. That is very ancient and very real, you just might not remember, as so you are calling these new people in and new multitudes of self in in order to navigate this reality that you are dealing with. And so yeah it’s dark, it’s real, we were living in this house together and once the lights are out, the lights are out, it’s black, there is nothing, there are Coyotes, there are … I don’t know what else navigating that space, but I know I stayed indoors so they can do what they wanted to do and I did what I needed to do in the day (laughs). 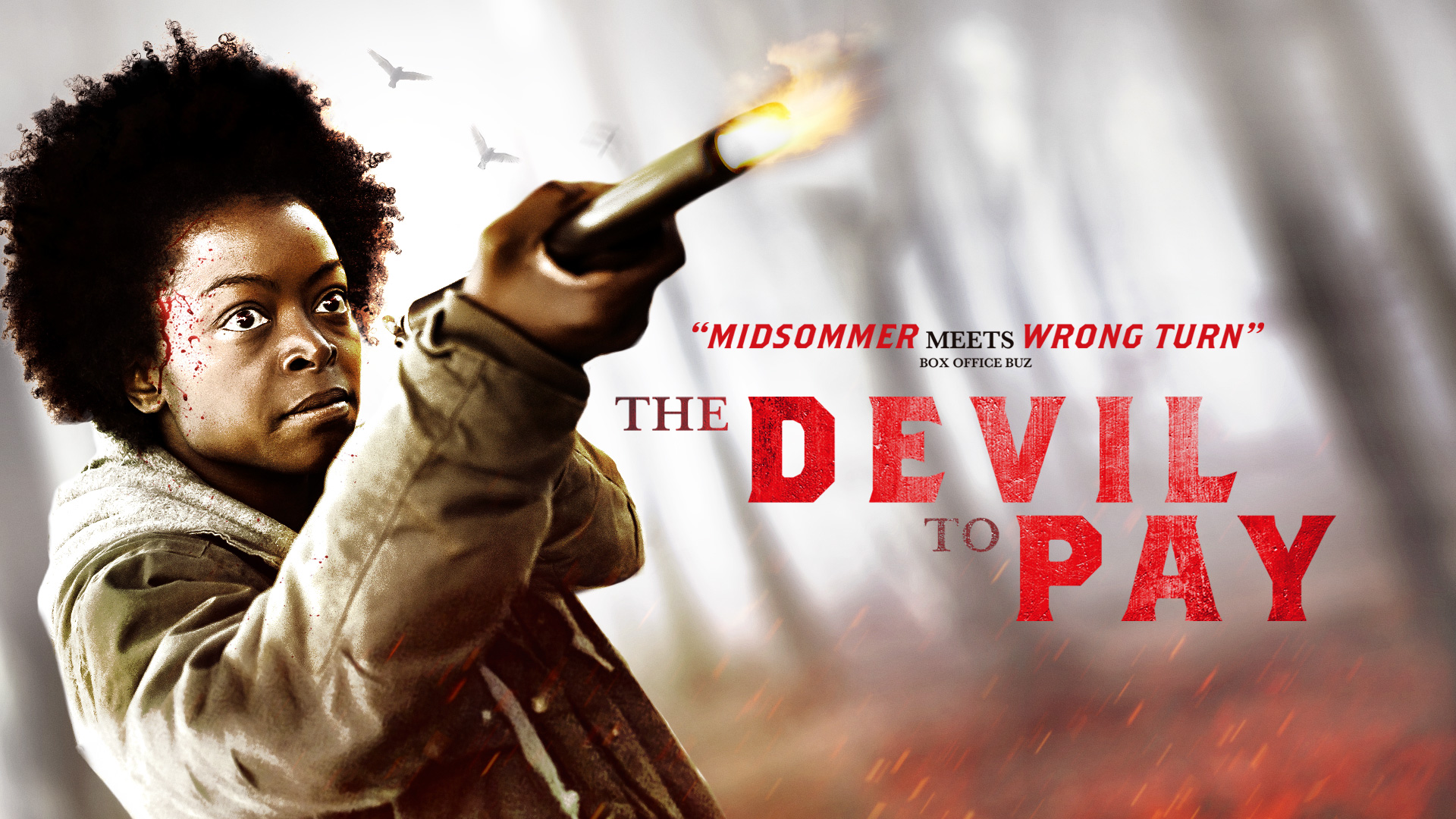 With special thanks to Signature Entertainment

The Devil to Pay - Official Trailer