Frankfurt, Germany 1938, Karola Ruth Siegel waves her father goodbye as Nazi officers escort him away. A vivid picture imprinted in her mind. This would be the last time Karola will see her father, the man she acknowledges for impressing upon her the importance of education. Little did the 10 year old know that education would be the staple part of her existence and she would later become a broadcaster, author and the TV personality who would go on to revolutionise and encourage debate in relation to our attitudes towards sex.

With a remarkable documentary Ask Dr. Ruth out on DVD 16th September the 91 year old is as active as ever. So when the opportunity arose to ask Dr. Ruth some questions of my own, how could I resist! 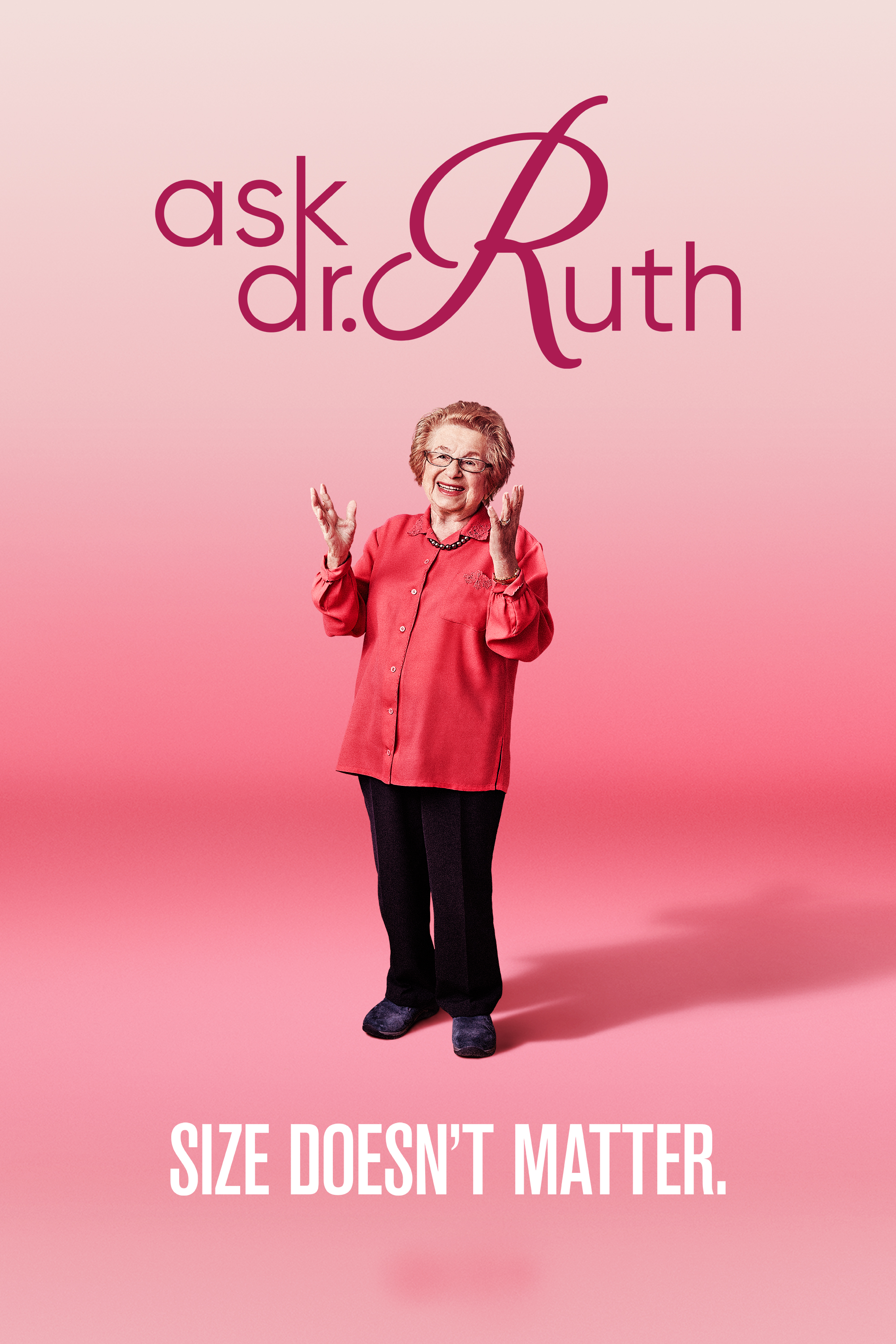 Self-confessed ‘orphan of the Holocaust’ the documentary highlights a deeply private and modest lady, so I wondered if Dr. Ruth had any hesitation in participating in this documentary.

“Thank you, I thought I did already enough of those, I did a BBC, and then I saw the films that the filmmaker Rafy (Rafael Marmor)  made and the producer and the filmmaker Ryan (White) and I thought these are very serious people let me try to do that. And now very happy because the film is very well received. I did a lot of publicity in Switzerland, I just came back from Israel, full houses. Very nice.”

Having been evacuated to Switzerland and raised in an orphanage where Dr. Ruth received a limited education, inspiringly it wasn’t until 1967 when Dr. Ruth was 42 that she would begin studying for her doctorate. Education feels very much the motivation behind her work.

“Absolutely and that’s wonderful that I can give my father so much credit because he really valued education above everything. And I just heard in Israel two days ago that I’m getting an additional honorary doctorate from Ben-Gurion University in the south of Israel, and I just heard that I am being erm mentioned, I’m getting a member of the music business award, wonderful. Very, very nice because of my work on radio. Very nice.”

It’s remarkable to cast my mind back to the 1980s and think that to publicly speak about family planning and sex were still taboo subjects. Having taught at Columbia University and Princeton University did having a background in academia help break down barriers because she didn’t regard these matters as cheap titillation?

“Right, very important that I was so fortunate by having had the best mentors and it comes across very well in the film. Helen Singer Kaplan who was a wonderful mentor, the first sex therapist who wrote a book The New Sex Therapy and it comes across very well that I use humour in order to teach, but also how serious the issue is in terms of not making fun, but teaching with humour in a good sense. And then students will remember what you taught.”

Do you think that shows humanity in it as well?

“Yes I think that especially now, I just published today, very, very recent, this week Sex For Dummies. With new chapters, (laughs) it’s the fourth edition. New chapters for young people so that they should know there is more information needed and that it is a body of scientifically validated data that we transmit in terms of good sexual functioning, and I think that comes across nicely when I talk about the mentoring and I talk about the importance of scientifically validated data.”

Over the decades the landscape in attitude to sex has changed unequivocally to the point where perhaps as a society we have lost our sense of modesty too much, do you have any views of this?

“Yeah I feel very strongly that two people, two men, two women, or a man and a woman have no business being naked in bed if they haven’t decided to have sex. So this idea that they can say at any time, I changed my mind is, is a big problem. So we have to teach the sexual arousal is very important and not to be taken lightly. So people should make that decision if they are going to be sexually active before they are naked in bed. Because I don’t want to hear any more that he over powered her, or that she really didn’t want to have sex, she has to make it clear if that’s what she wants or not.” 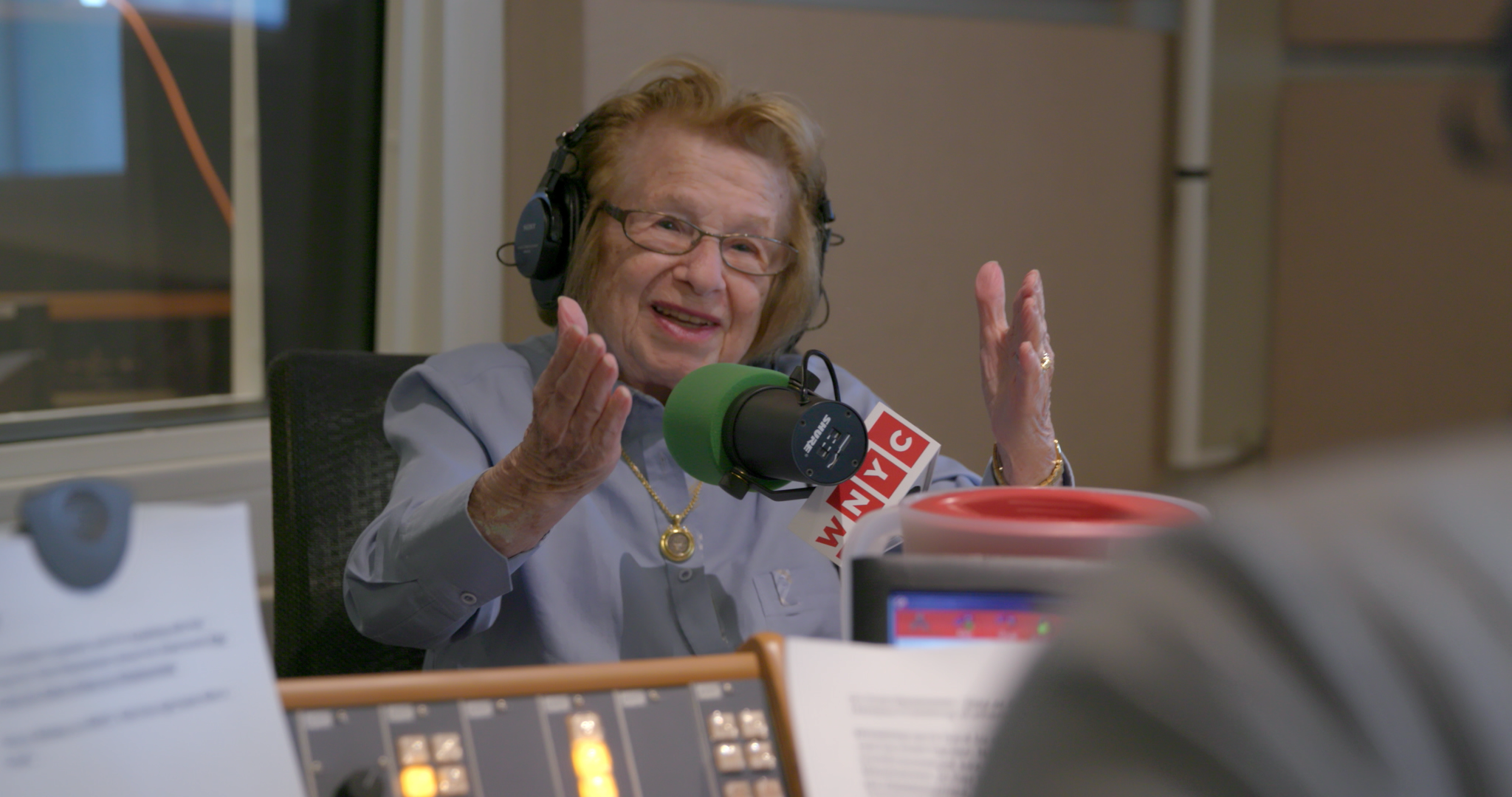 “I was able to take what life offers and make the best of it.” 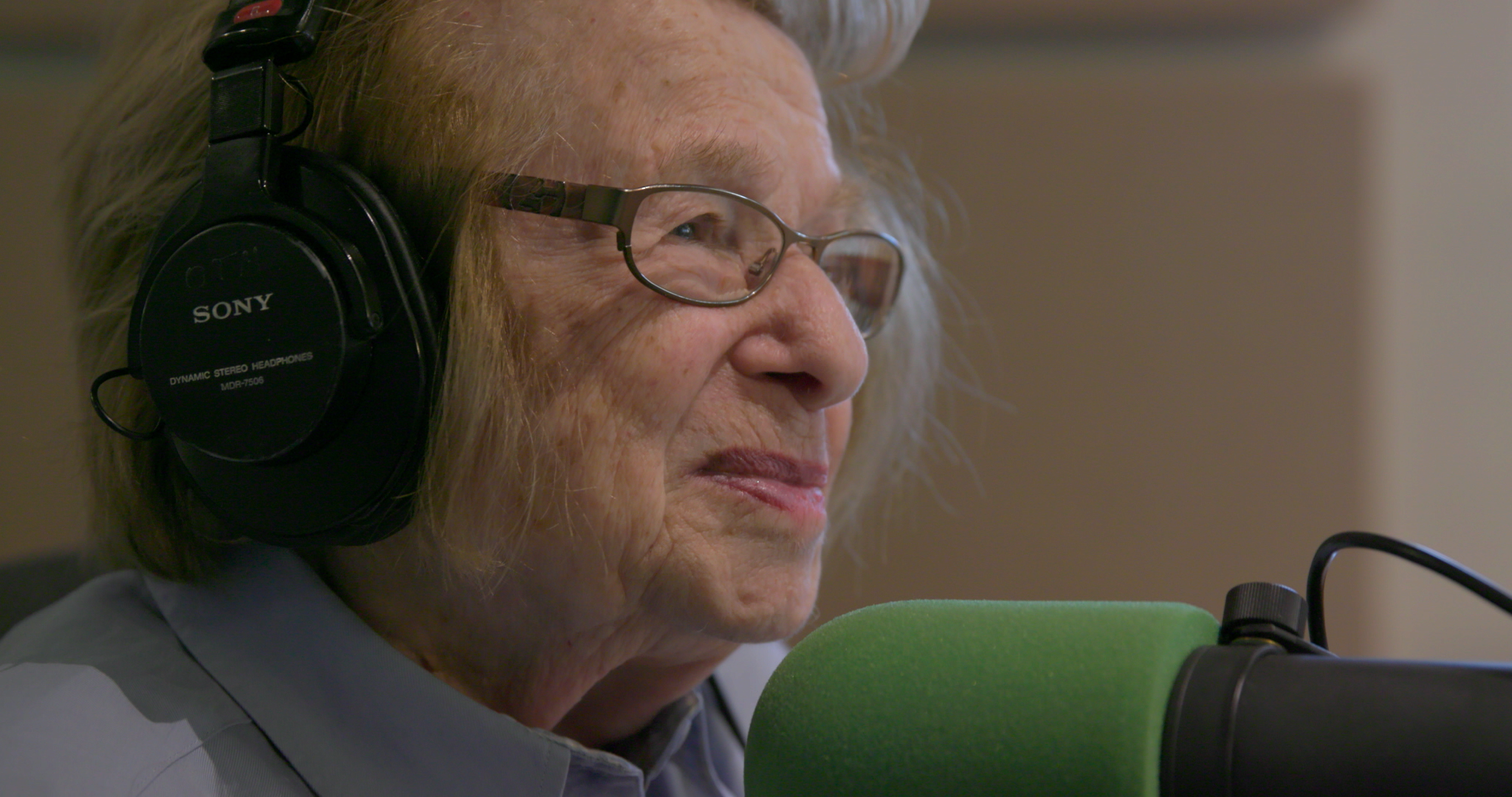 Dr. Ruth attests that communication between the couple is paramount.

After seven years of working with Helen Singer Kaplan at Cornell University and then setting up a practice as a psychosexual therapist, Ruth Westheimer volunteered to participate in a late night radio show, the show ‘Sexually Speaking’ would change her life forever, so I wondered how important has the medium of film / TV / radio been in helping convey her work, and reach wider audiences?

“And not only that. When I started to talk about AIDS not many people talked about AIDS in those years, and I still talk about how people have to be careful about sexually transmitted diseases when they have more than one partner. So very important. I think the film showed the multi-dimension of sex therapist and sex educator that you can really teach the importance of education. And to teach the importance of being sexually literate of women knowing what they have to do in order to have sexual satisfaction and erm we have advanced tremendously, but there is still plenty of work to be done.

The documentary captures Dr. Ruth’s adventurous spirit, a lady that is very open to new opportunities and living life to the fullest. 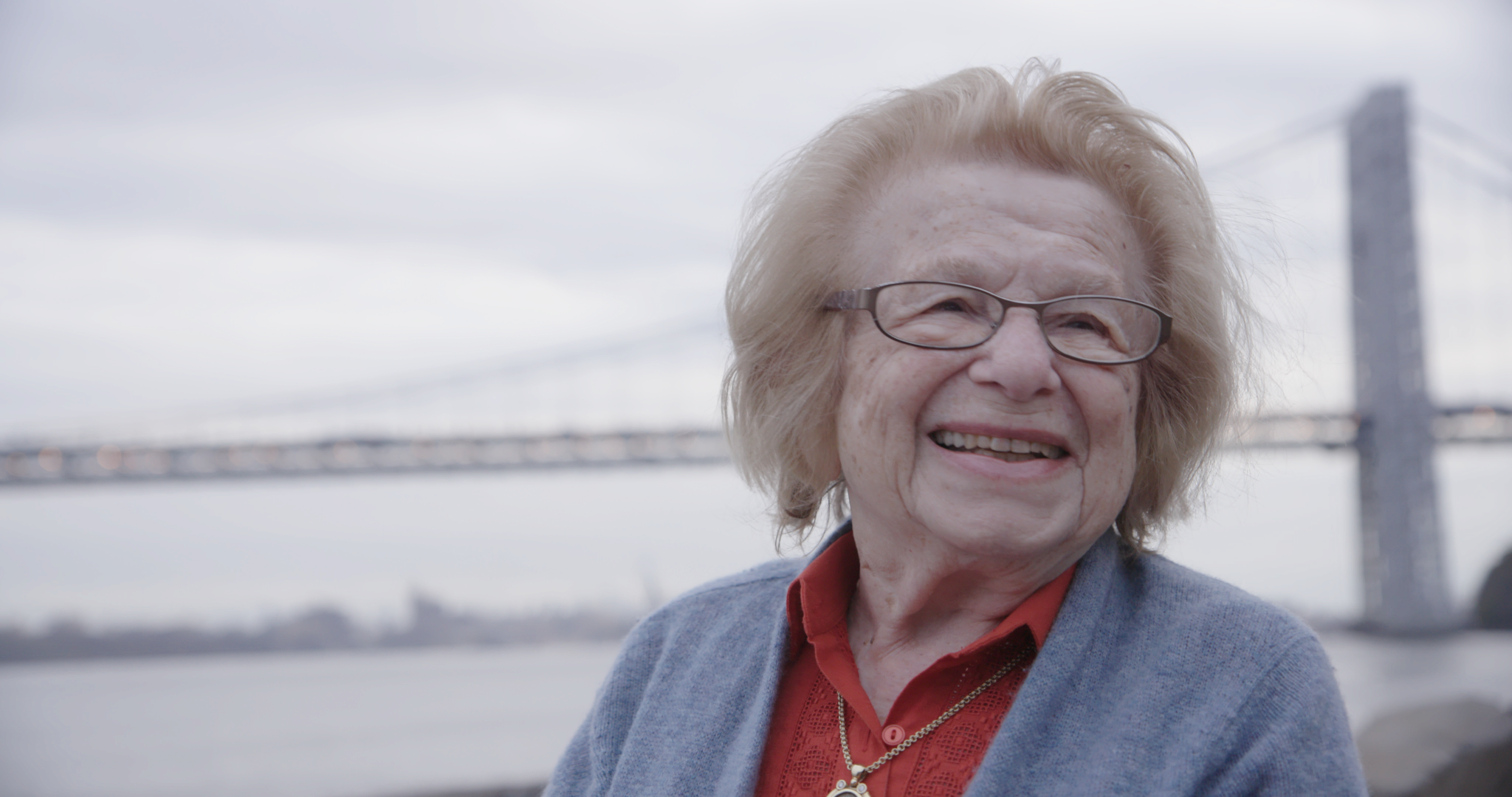 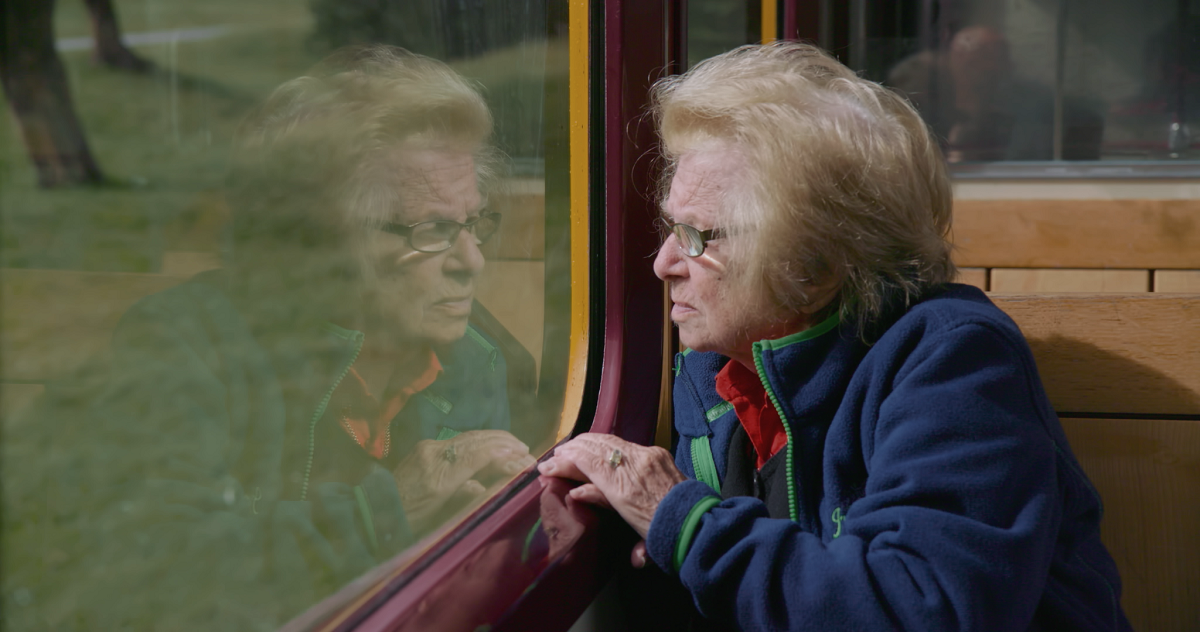 “I think it’s a fair assumption that I was able to take what life offers and make the best of it. And despite the fact that I was an orphan at the age of 10 and always tell you British people that you in 1939 you people took 10,000 Jewish children to safety. Holland, Belgium, France and Switzerland took 300 each, and I was fortunate to be taken into Switzerland because if I’d been in Holland, Belgium, France I wouldn’t be alive. And you people despite the fact that the dark cloud lay on the horizon before World War II that you took 10,000 British children to safety, with the Kindertransport, one should never permit that to be forgotten.”

Watching the film the hope is people will learn the importance of being non–judgemental and being more accepting of each other, was this something important for Dr. Ruth?

“I like very much what you said, because the most point in that respect is that I said that respect is not debateable, that you have to respect every single person, if they are gay or not gay, whoever they love and that comes across in the movie beautifully. It could not have been better than the way that comes across, so I am very happy that you journalists saw that clearly. I hope to meet you when I come to London.”

I will treasure the memory of interviewing Dr. Ruth Westheimer, a remarkable women, who with a sense of humour and sincerity helped the world evolve its attitude towards sex, intimacy, acceptance and most of all respect for one another.

Available on DVD on 16th September