Prepared to be disarmed and lured into a refreshing and original perspective taken on the highly publicized story of serial killer Ted Bundy. Zac Efron’s astonishing, chilling portrayal demonstrates just how easy it would be to be influenced by the charms and charisma of this extremely wicked, shockingly evil and vile predator. The film delivers a human interest story and cleverly avoids any formulaic detective tropes. Even knowing what we know, the film continues to keep you guessing.

Based on the book by Elizabeth Kendall

Seattle 1969, Liz Kendall, single mom encounters the most charming, disarming, good looking man. This man, a student of law will become the perfect boyfriend and devoted family man; she has hit the jackpot! This man is Theodore 'Ted' Bundy, kidnapper murder and rapist of no less than 30 women, becoming arguably one of the United States most prolific serial killers. And here lies the beauty in the cautionary tale of Extremely Wicked, Shockingly Evil, and Vile.

Starring Zac Efron as Ted Bundy and Lily Collins as Liz Kendall, the film is based on the book The Phantom Prince: My Life with Ted Bundy by Elizabeth (Liz) Kendall and we the audience will gain an insight in to just how easy any of us could fall in love with the wrong man. 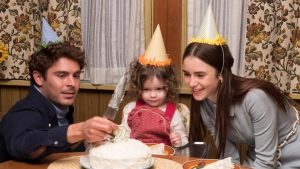 If you feel you know all there is to know about Ted Bundy, think again because director Joe Berlinger delivers a fresh point of view in the study of this notorious serial killer, as we see him  we have never seen him before.

As the director of the Netflix documentary Conversations with a Killer: The Ted Bundy Tapes and many more true crime documentaries, we can consider Berlinger as a real authority on the subject and more than qualified to deliver an authentic, truthful account of these events.

If you were wondering why you would want to own such a grisly tale and re-watch these events unfold on screen, well let me share with you my own personal findings. I have watched the film on a few occasions, once in preparation for interviewing Efron, Collins and Berlinger and twice for writing this review and every time I have found something new. Even when you know what you know, when watching it again, you pick up the nuances in the performances, and there is always something new to discover.

The subject matter is handled very delicately, there is no salaciousness, or glorifying what happened, the nature of his crimes are reported through news broadcasts, so we learn of these events as potentially Liz would have done at the time. This is the story of a relationship between two people.

The film has been so cleverly crafted. As you watch the film you literally dispel anything you previously knew of Ted Bundy. As Efron's dreamy looks and charismatic performance draws you in, you root for this young couple. You literally question your own sanity and his guilt as to whether he actually did commit these brutal crimes, proving just how easy any of us can be blinded by love. 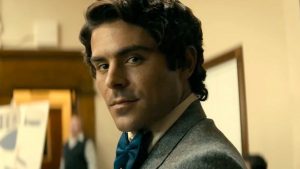 The multi-layered performances must really be commended, and Collins and Efron are really quite captivating on screen. I too enjoyed the irony of Joe Berlinger briefly appearing as a court reporter interviewing 'Bundy'. Perhaps the documentarian is fulfilling the closest opportunity he could ever have to get close to the mass murderer and learn first hand.

The film was shot remarkably in 28 days and it's visual aesthetic does transport you back to the era, and is superbly edited. Not to be forgotten are hair, make-up and wardrobe departments for their intricate, authentic and credible attention to detail.

To quote Liz Kendall in the film, "I fell in love with a weirdo." What Liz did was to innocently fall in love with a resourceful, intelligent and deceitful individual who was 'Extremely Wicked, Shockingly Evil, and Vile.'

“It could be the person closest to you is the most evil person in the world and you have no idea." - Zac Efron