Andrea Valls is certainly an actress of her generation, resourceful, intelligent and isn’t scared to use all the tools at her disposal to hone her craft. Predominately known for portraying Jess, in the BBC’s Waffle the Wonder Dog, Valls next show Cheaters also for the BBC takes a very different tone. Naturally gravitating towards comedy we had a lot of fun talking about her career to date as I discovered we both had something in common; our Spanish heritage.

It all starts with the writing for an actor, so can you tell us about Cheaters and why the script attracted you so much?

Definitely! The script is just very quick and witty, and I felt like it was a real representation of people my age, the relationships we’re having and the relationship we have between our family members, but also our lovers and our friends as well. I thought it was such a refreshing take on those difficult dynamics, especially when you get into long term relationships and there’s influences from the outside. I thought the script presented a fun, new way that spoke to people of my generation and that’s what was really exciting about it.

Obviously, the clue is in the name Cheaters, it’s not about a big wild cat we’re talking about infidelity (laughs). There’s 18, 10 minute episodes, so you’ve got a long period of time to explore the emotional rollercoaster that that can take us on?

Yeah definitely, you have enough time, but I think what’s really engaging about the way they’ve formatted it is that those 10 minute episodes are really bingeable, and I think everyone is in touch with that way of consuming content now. You just go, ‘oh I really love that episode I want to get to the next one, the next one, the next one.’ I love the fact that someone can sit there in their living room on a Sunday afternoon and watch the whole thing and know the whole story and be invested in all the characters and be so excited for the next round of it. That’s how I watch TV now and in a way some people don’t like it, some people think it’s instant gratification. I think why not, it’s like watching a play, or watching a movie. You sit there in one sitting and watch a play or a movie, so why not watch a series that way.

Yeah absolutely. And tell us more about the character that you’re playing? And what you connected with?

I play Nina, who is Josh the main characters sister, she’s younger than him but in some ways she’s quite a lot wiser (laughs).

I’d like to think that anyway. She has a real sibling connection and relationship with her brother that I actually have with my own brother, so that was a really, really lovely thing to explore on screen, I’ve not had the chance to do that before. She really cares for him so much but she also doesn’t take any of his crap, so it was just a really, really nice dynamic. She’s very different to me in a sense that her personality, she’s got a hard exterior, but very soft interior, whereas I’m, ‘l love you, love me,’ straight away. But she’s a great character, I really liked her sibling relationship, it was my favourite thing to explore.

And I suppose that’s the joy of your job as an actor that you get to explore different facets of human personalities, you can delve deeply into a personality that is so completely opposite to yourself?

Yeah, it’s what makes the job interesting, to find those similarities that you have with the character, even if you are playing a serial killer (laughs), I’m pretty sure you will find something within that human nature that you can connect with. And I think that’s the important thing, you find what connects you and then you learn and discover new things around that. Also, the writer’s not given us a bio of who they are, it’s your job to create that, just with the words that they have given you, so that’s what’s fun. That’s the creative thing about it, you get to make that person more than the writer gives you, which is really fun.

And talking about being really creative because you’re a writer as well. I’ve seen many of your sketches on Instagram and YouTube which are hilarious. Spanish mother is probably my favourite (laughs). Are they fun to write?

Yeah they are really fun to write, they’re hilarious, basically she is real, she is my mum and a lot of the time I don’t actually have to write it, I’ll just ring her and have a conversation about something and I’ll just be making notes. She hates it, she actually hates it so much and she just tells me constantly, “You’re laughing at me, you can’t do that.” Well, “It’s there it’s written for me, what do you want me to do, stop being so funny.” “Well I’m not trying to be funny.” So yeah, I think a lot of people have that relationship with their mum, we all like to take the piss out of our parents don’t we. It’s allowed, I think it’s allowed.

I think what I have seen with all of the sketches they show your versatility and the relatability of your characters, I’m sure that is very important to you?

Oh yeah that is massively important. The sketches just came about from me being in between jobs and still wanting to feel I was doing something, and feel like I was taking control of my own success and career a little bit. And not trying to make them successful; some people have absolutely blown up over lockdown and their comedy has absolutely taken off. And it might take a little bit more time for me to get there, but I don’t mind because it honestly it’s born out of me trying to have fun again and have fun through what I do, and what I love to do. That’s why a lot of the characters are relatable, they might be people in my life, or they might be people that I have seen, or that I understand and connect with. But it’s just a lot of fun to do.

And I think you’ve hit the nail on the head there, when you’re doing these sketches you are in control of the story because for many actors you’re not. Maybe acting for stage is a different discipline, but definitely acting for film and TV, which we know you for, it’s a directors medium. So is it nice for you to be able to go, this is my story and I’m going to tell it exactly how I want to?

Yeah absolutely. I started off on YouTube with YouTube actors and directors that were really successful on the channel and this was something that was quite new and people didn’t quite get. They were like, “What? It’s a series on YouTube?” And now it’s become a huge medium that has blown up, but in that sense I was really able to do a lot of the creating with the directors which was exciting. But yeah, TV allows for less of that and theatre definitely allows for more. 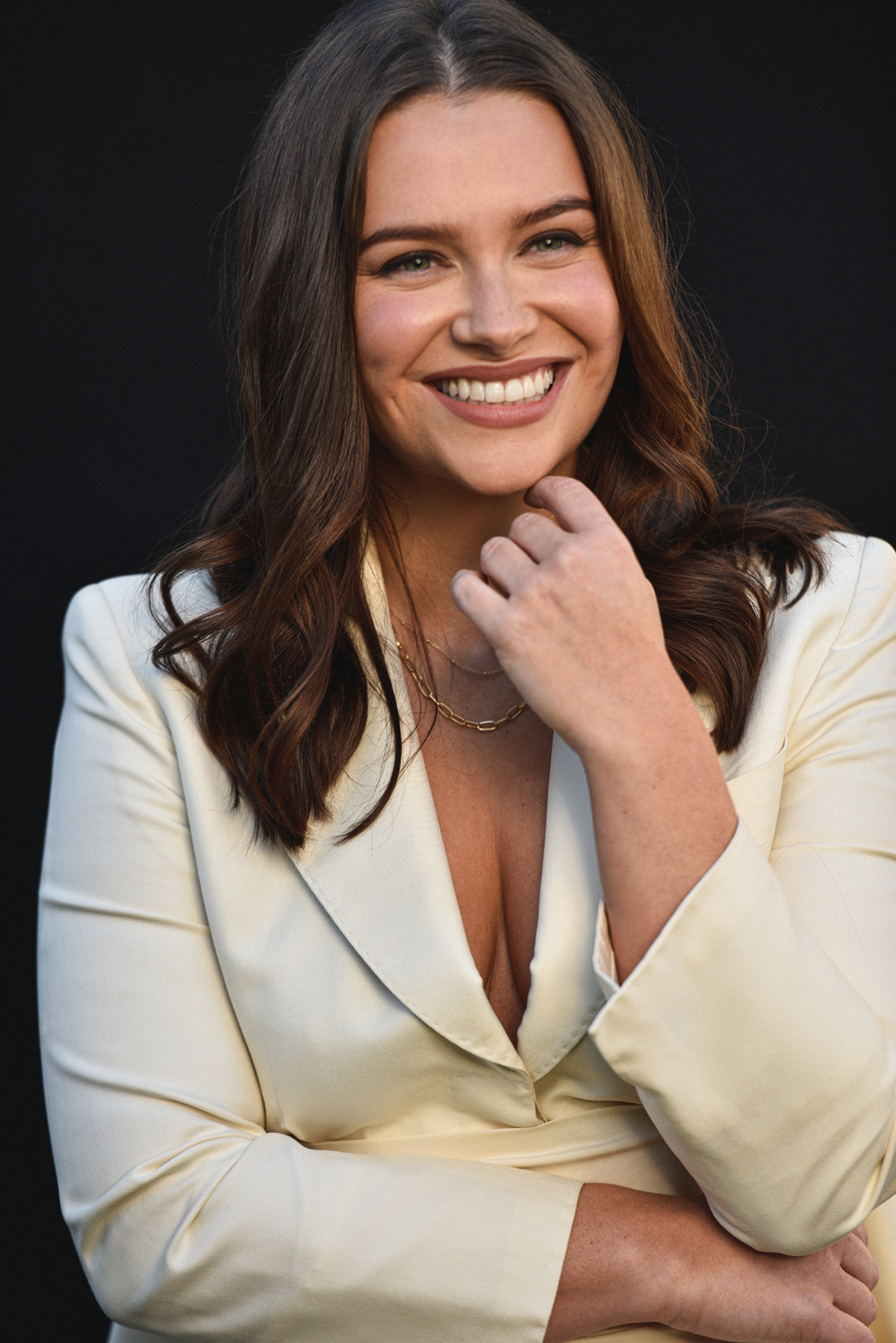 “There’s just something about laughing and making people laugh.”

And we know you from Waffle the Wonder Dog. That just looks like a joyful series to be a part of?

Yeah, Waffle was such a great series to be a part of, such a great first big job as well. That was the first big, big job that I had that was on telly and it was going to be shown pretty much every day; and it is still pretty much being shown every day (laughs). People who come up to me, new viewers, new parents and all that kind of stuff, they’re still watching it, and they’re still loving it, even though we’re not shooting and filming anymore, I still feel very much a part of that world which is just really nice. And what a wholesome lovely show to be a part of. Very different from the other stuff that I do (laughs). I think a lot of different actors started in different places, and I think this is just my start and that’s great.

And comedy seems to be very much at the heart of your performing, what is it about comedy that motivates you?

There’s just something about laughing and making people laugh that’s just really fun. I think you if you do your best work in anything, it doesn’t matter if it is acting or banking, if you’re having fun doing what you do and you’re not in service of others, but if it is making someone else happy, I think that it puts you in a really good elevated position. You feel good about yourself, you feel good about life, and it makes them feel good. And then also having grown up, my dad was very much into the British classics, we had Faulty Towers on constantly, we had 'Allo 'Allo!, we had Only Fools and Horses, and Monty Python of course. And so I was massively conditioned in childhood to enjoying that kind of stuff, and doing it as well was even better and even more fun, and then writing it. But when I was at drama school I thought I was going to be a very serious actress, I was going to be a Dame Judy Dench darling, and then I realised that no actually. I think I did one play where I decided to make the character a bit absurd and made her quite funny and brought the comedy to her, and it was like I’d been set free, I was really enjoying it and I did really well in it, and I was thinking, ‘oh it’s because I’m doing that, I’m having so much fun.’ So yeah it’s always been about enjoyment for me.

And finally, going back to Cheaters what have you taken away with you from being a part of the show?

Being part of the series has shown me that if you have a great core cast, that are really close and get on very well, you make some really exciting art. So I think it’s really important to have a good relationship with who you’re working with. And if you don’t, you can’t always help that, but try as much as you can to enjoy the time that you’re there. But for us, definitely I would say we were all such a tight family doing that show, especially when Coronavirus hit, and we had to stop and everyone looked after each other. So I think taking care of each other on set, it makes for a good show. 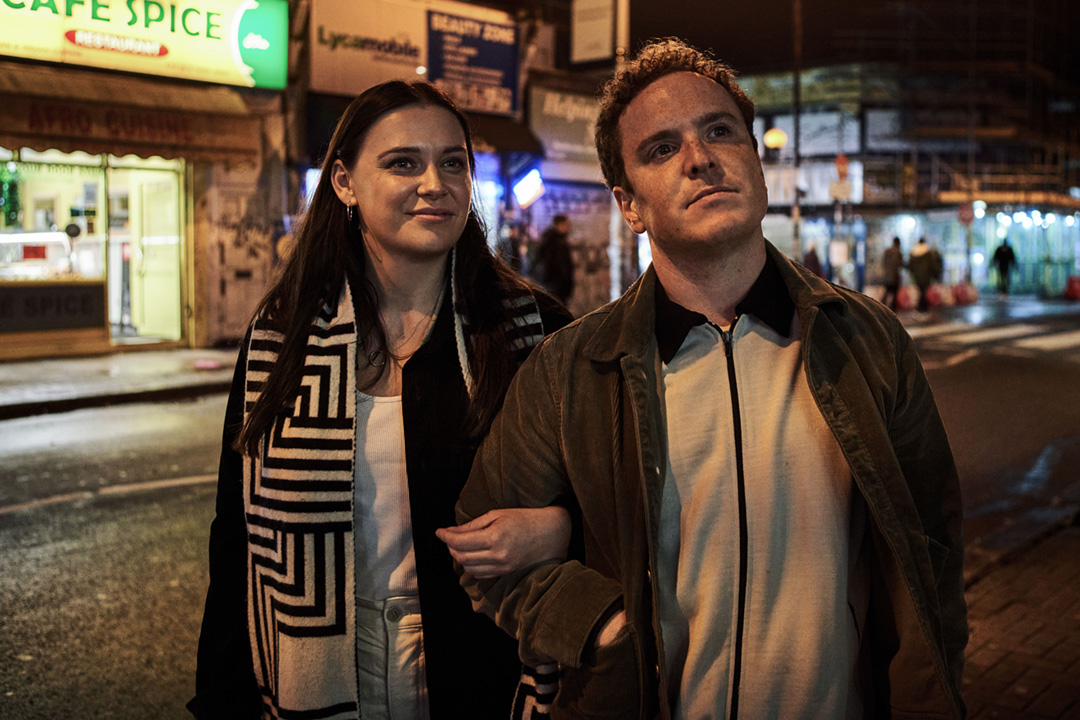 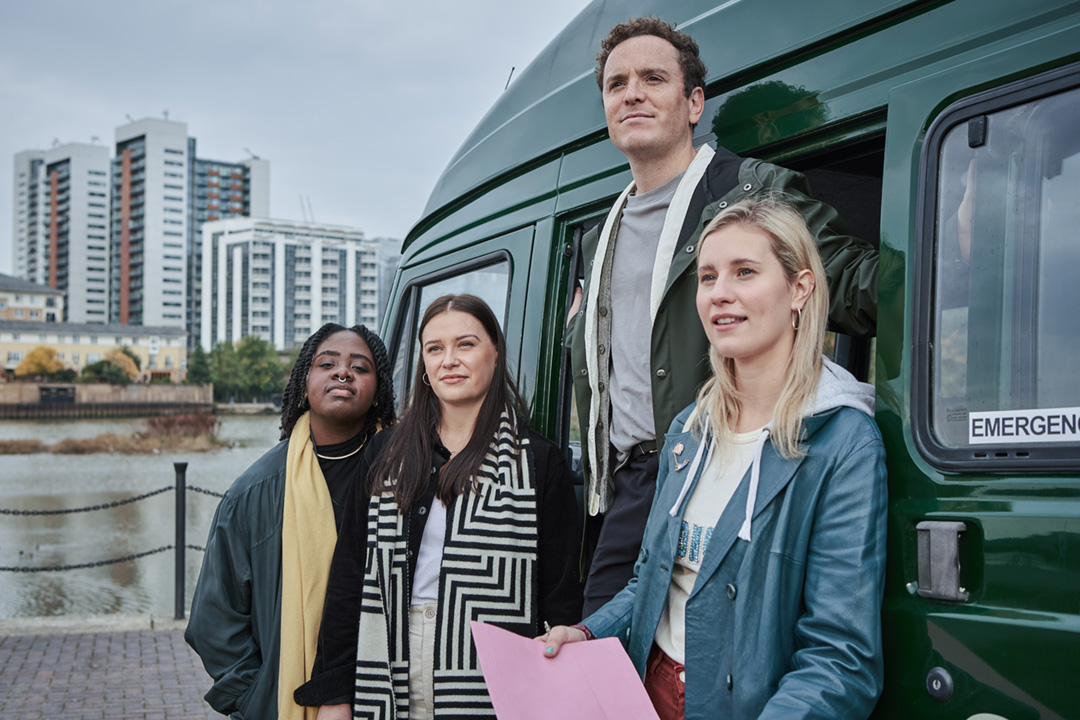 Catch Andrea in Cheaters, starting on the 8th February at 9.45pm
on BBC One, also on iPlayer.