Based on the novella Lady Macbeth of Mtsensk by Nikolai Leskov

When I first heard the film, Lady Macbeth was screening at the British Film Institute (BFI) London Film Festival (LFF) in 2016. I instantly thought, it was a film based on Shakespeare’s ‘the’ Lady Macbeth. Wrong! But I would soon be put right.

Lady Macbeth is an adaptation of the novella, written by the Russian writer, Nikolai Leskov, back in 1865. But don’t be disheartened that this was not penned by the bard. As this Lady Macbeth is as rich, complex and as refreshingly diabolical as the original, which made this film a compelling watch.

“What sketched out in the novella was essentially the plot. And what you needed to do, and what Alice Birch, the screenwriter did was to create character, and to create real people so brilliantly,” said the film’s director, William Oldroyd when I interviewed him, and the cast, at the BFI LFF Premiere.

Oldroyd continued: “She developed psychology, she made them breathe. Then you get Florence (Pugh) involved, which is totally three dimensional.”

Leading lady, Florence Pugh delivered a mesmerising performance in her break out role as Abbie Mortimer, in Carol Morley’s critically acclaimed, The Falling. And prepare to be further spellbound by her portrayal as Katherine, the young bride, married off to a wealthy, but heartless landowner, who is destined to live a life of solitude.

“Well, she’s a killer, which I’m sure every single actress would want to play,” laughs Pugh, on her anti-heroine.

“She’s just an interesting character. In 1865, she kicks back, and it’s so unlike everything we’ve seen before. She goes out and gets what she wants, she likes how she wants to live. She experiences life without the cages of what men have told her to do.”

And kick back she does, as Katherine doesn’t let anyone stand in her way. Yet for all her dastardly deeds, you never loose investment in her.

As a director, William Oldroyd’s background is in theatre, and it shows. Two of our greatest film directors that instantly jump to mind are, Danny Boyle and Kenneth Branagh, who are also firmly anchored in theatre. The secret to their success is undoubtedly their understanding and investment paid to creating three-dimensional, layered parts that their actors can breathe life into.

And in Lady Macbeth, Oldroyd has skilfully captured that.

“She’s a killer, which I’m sure every single actress would want to play." - Florence Pugh

“You’ve got to build a trust. That’s why the rehearsal process is so important,” says Oldroyd. “You can’t just get an actor to do something, if they can’t trust you. Especially if there’s intimacy, and those sort of violent scenes. They need to know they’re in a safe pair of hands.”

He continued: “Part of the rehearsal, or shooting process they felt I could ask them to do anything, and they know I wasn’t going to exploit them.”

A sentiment echoed by the leading lady: “By the time we started filming we’d done most of the intimate scenes. But we planned it, and it wasn’t shocking.”

“I like the dialogue, the way it was written,” says Jarvis.

Filming in the North East was the ideal location. Couple that with the crafted use of lighting, sets up a bleak, stark, minimalist back drop that acts as the perfect metaphor for the life that faces young Katherine. 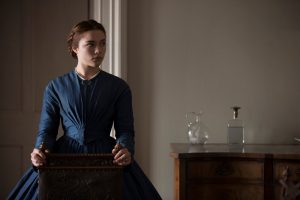 What was fascinating to learn, and rare for filmmaking, is that they shot the film in chronological order.

“We had about a week of solid rehearsals,” says Pugh. “The day before we started filming, Will, made us go through the whole film because we were filming in the one location. It was great in terms of going around the house and figuring where we needed to be, and he made us go through the film in chronological order, of going up and down the stairs and back down to the kitchen, not the kitchen, but the sitting room.”

She continued: “I remember saying, ‘do I really need to go up to the bedroom again?’ And he said, ‘yeah because this is how boring and monotonous her life was.’”

Boring and monotonous Katherine’s life may have been, but they are not words you would use for Lady Macbeth. It is a fine example of independent filmmaking and worthy of support. It may be a period drama, but a drama that contemporary audiences will be entertained by.