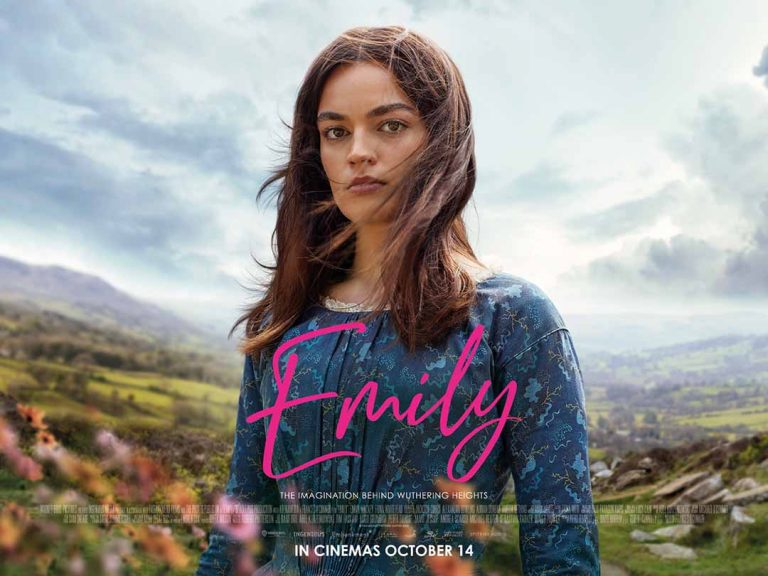 Alongside dramatic and morose landscapes, which mirror a character’s controversial personality; Frances O’Connor’s Emily, attempts an alternative and amorous storyline, amidst identity exploration, which mistakenly could have been scripted by Emily Bronte herself.

“How did you write Wuthering Heights?” – is the question presented by Charlotte Bronte in the beginning of this sensuous non-biopic drama, where a search for identity and an exploration of feminist tropes is creatively reimagined by debut director Frances O’Connor. In this windswept romance, Emily Jane Bronte, is introduced as a solitary and reclusive character, prior to her writing one of English literature’s most illustrious, praised, and timeless novels. The historical inaccuracies. which may instigate an issue with Bronte purists, does plenty to capture a viewers’ attention, with visually arresting interactions of sensibility – which have become customary in period dramas.

Most visible within the legendary author herself, is her tenacity, when being faced with a violent world, where resilience and being strong willed was not appreciated from Victorian women. Independent freedom was a constant struggle for the protagonist, who was born in the Victorian period, where women’s rights were extremely limited. O’Connor’s interpretation of Emily Bronte, played by Emma Mackey, was that of a spirited individual who coloured outside the lines and was ahead of her time. She is portrayed as both a rebellious and sensitive soul due to her desperate need for escapism. As Emily aims to understand the people who surround her; her character traits are continuously highlighted within the story as a woman who continuously marches to the beat of her own drum, whilst continuously trying to break free from the shackles of society. Literary biographers have considered Emily Bronte to have difficulty in relating to others socially due to a development disorder, which may explain her rigid behavior. Yet, without understanding her psychology and shared emotions, she simply could have been an introvert, who simply relished herself in her own company. O’Connor does attempt to highlight these patterns in Emily, despite her short-lived life.

Notwithstanding her obstinacy, Emily Bronte created an incredible legacy for her gender as a writer, which sadly was only acknowledged under her real name postmortem. The sensational performance by Mackey, who successfully met the brief, portrayed Bronte’s misunderstood and unique trait beautifully with a combination of vulnerability and defiance, when compared to her sisters: the critical and jealous Charlotte Bronte, played by Alexandra Dowling and the sensitive Anne Bronte, portrayed by Amelia Gething. Mackey envisions Emily as the mysterious one, whilst successfully stripping the entire construct of what is expected from women during that period.

Like the attics of the abundant houses of the era, the austere rooms and interiors in each scene are filled with the memories and the weight of the ages. The sound design choreographed movingly fill hushed breathes of the indoor along with the scouted backdrops of the fields. The ghostly trees, visible from the bedroom windows, which sparked Emily’s inspiration, match the depressing environmental conditions of a home built next to a cemetery and draped with the silent winds of the outdoors. O’Connor’s controversial work seems to lean more towards that of historical fiction, with vivid Shakesperean images throughout. From her usage of motifs and metaphors, characters’ behaviors and settings parallel the novel significantly. 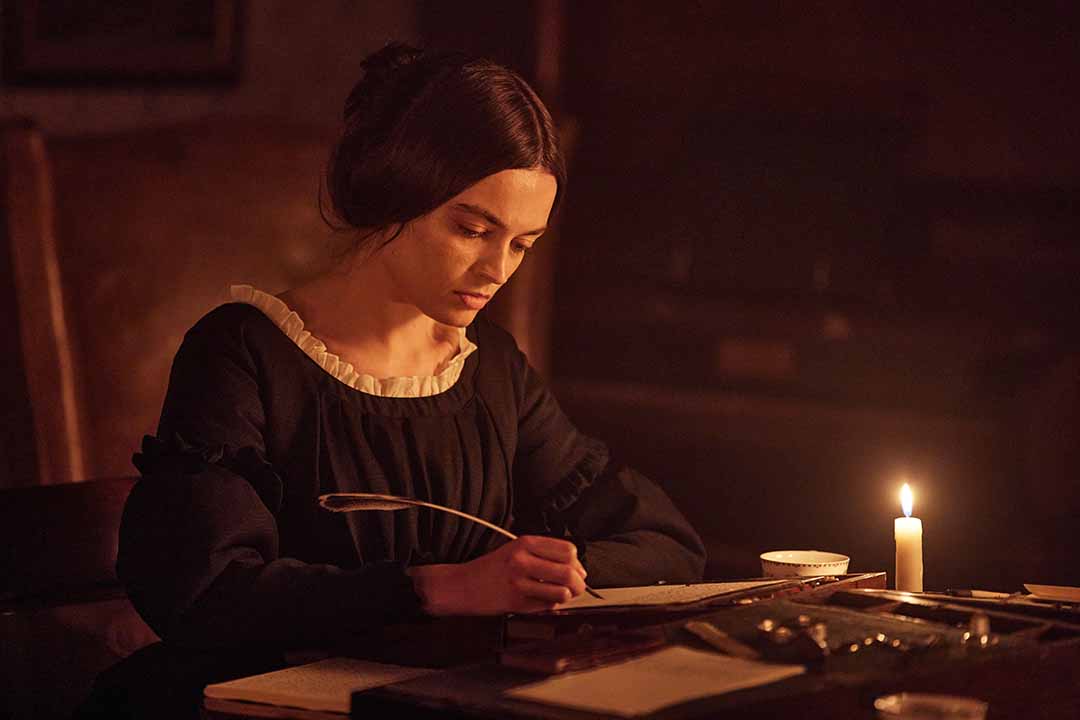 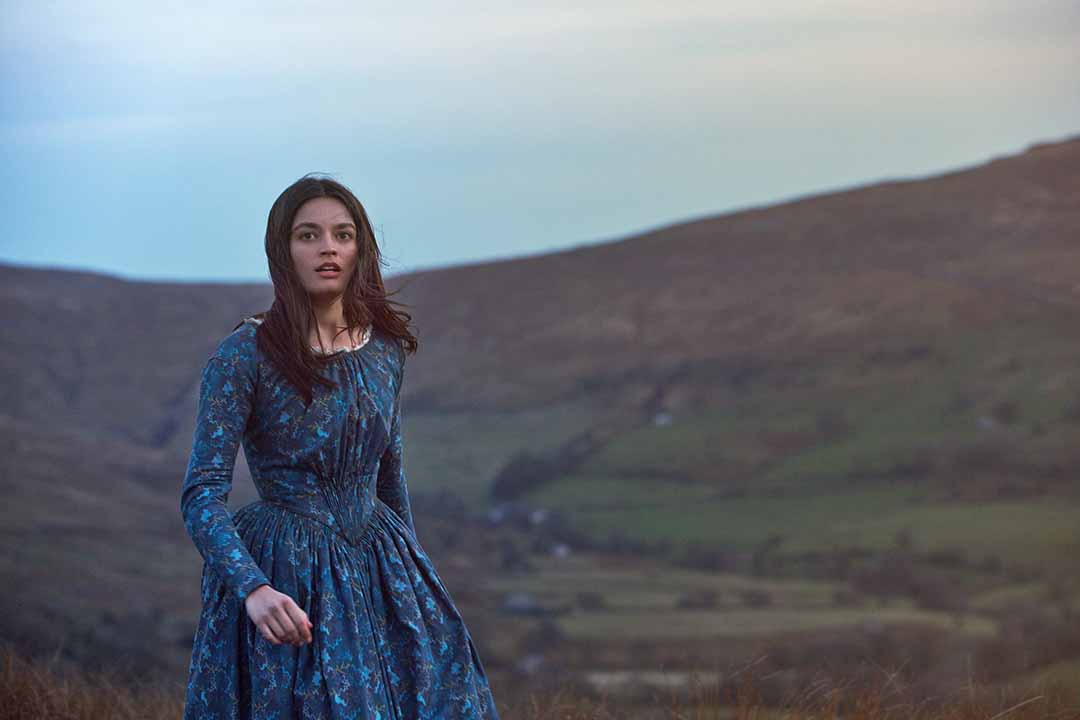 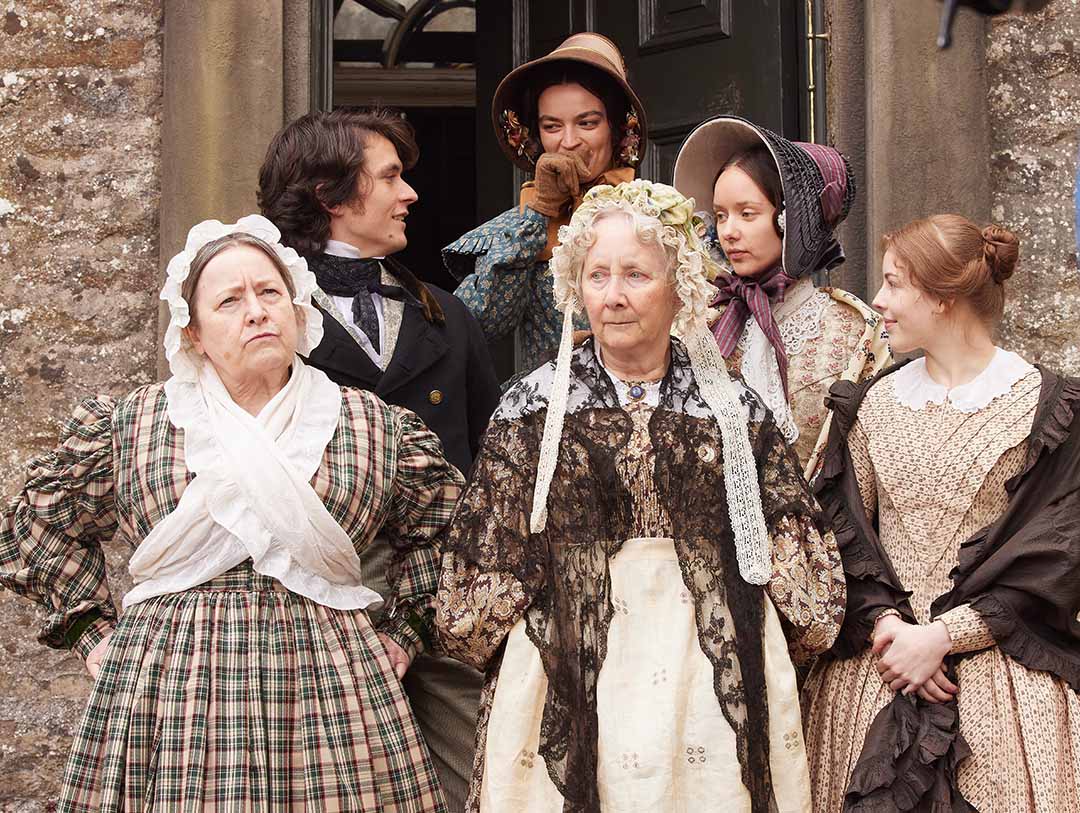 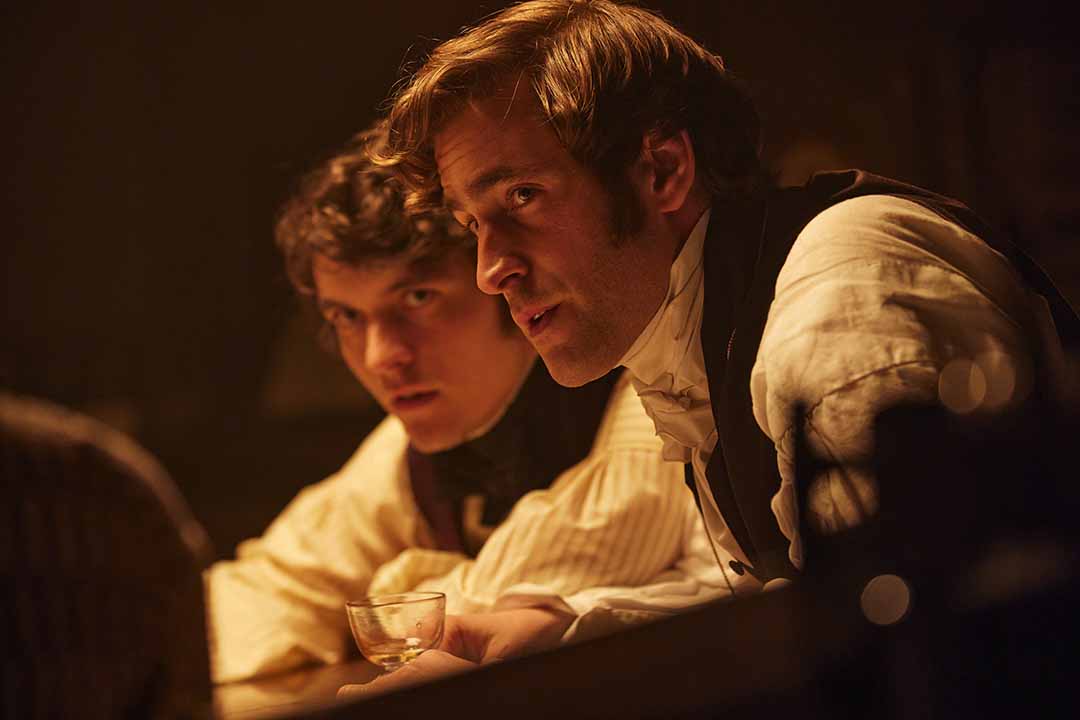 The fictious and the unnecessary pairing with an existing William Weightman, played by Oliver Jackson-Cohen, a somewhat interesting parish curate, who enthuses the Bronte sisters – typical in storylines of this nature; fails in achieving a similar reaction from Emily, until predictably becoming her love interest and illicit lover. The conflict, which existed between them was due to his religious views and fear of being influenced by a female writer, who had the power to enchant him through her words, and unconventional thoughts that were beyond his limitations. After his death, the lack of communication from a hidden apologetic letter from her brother, Branwell Bronte, played by Fionn Whitehead; and the character flaws present from these moments, led to be the fictious inspiration behind Wuthering Heights. Despite history points Weightman to be the romantic interest of Anne Bronte; this volatile and optimistic portion of the film’s storyline was an inventive take and may have been an attempt to imitate the relationship between Catherine and Heathcliff in the novel itself. The concept may have been stimulating for some viewers, yet redundant for others, as the notion itself may in fact be a vessel towards Emily’s true love – which is her connection to nature and the landscape, which she was ultimately inspired by.

The cinematography shot by the talented Nanu Segal, captured the beautiful West Yorkshire settings, whilst simultaneously echoing the haunted soul of Emily, and shifting the genre from romance to that of both a psychological thriller and horror. This is evident with scenes of ghosts and undead spirits; especially when paired with poignant music composed by Abel Korzeniowski. Heartbreaking scenes varied throughout the production, which is another nod to aspects of the novel Emily Bronte wrote, as well as the future texts it inspired. O’Connor blurred the lines on what was fact and fiction; from Emily possession and embodying the spirit of her deceased mother, with such passion and agony for her siblings, and her close relationship with her brother – whose premature death affected Emily significantly. Branwell Bronte was the sibling who Emily related to, as he introduced her to his competitive need of being and failing as a writer, and his wild ways, and usage of opium, including her personal experimentation with the drug.

It is evident that Emily explores flashback moments of both the past and present of Emily Bronte’s life, with a sprinkle of O’Connor’s creative liberty. Even though the film, with its brilliant cast, was set in the 19th Century, there are many contemporary components, which surrounded the female protagonists and their fascinating storyline, which can relate to the current generation and educate a younger audience, simply by using a modern perspective. This varied from the exploration and stigma associated with mental health and trauma to gender issues and dealing with a patriarchal society. O’Connor successfully achieves the balance of delving into these vital issues, which are still faced today, without completely losing the essence and sorrow of Emily Bronte’s voice and original imagination.

Available now to buy, rent and on DVD