“You wanted me back. I’m back,” says John Wick. And we’re so glad that you are, and now available to own on Blu-ray / DVD and Digital Download.

Yes, Keanu Reeves is back as the Boogeyman, John Wick. And where most sequels rarely live up to expectation that cannot be said of John Wick: Chapter 2.

John Wick, our reluctant hitman is forced back out of retirement once more, because he has a debt to pay.

There’s a knock on the door and the solitary figure of Wick goes to answer. He opens it to find a face from his lurid past, Santino D’Antonio (Riccardo Scamarcio). Awkward pleasantries are exchanged as D’Antonio presents Wick with a ‘Marker’. 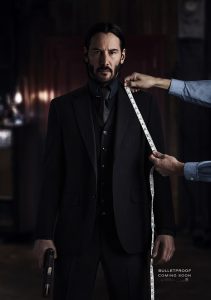 he Marker that signifies, in blood, that there is a debt to be paid and cannot be dishonoured. D’Antonio gave Wick his out, and now its payback time. A highly sensitive assassination is required, and D’Antonio is not taking no for an answer.

There are consequences for our actions, and this action will ultimately result in the hunter becoming the hunted, as a seven million pound bounty is placed on Wick’s head.

I have to tell you, I LOVE John Wick: Chapter 2, every single second.

The writer Derek Kolstad has convincingly created this network of the underworld. “Rules. Without them we live with the animals,” says Winston played by Ian McShane, who returns in this second instalment. It paints a picture that there is code of conduct, an elitism.

If the story is the canvas then, director of photography, Dan Laustsen has painted a masterpiece. The film visually is stunning. The use of vivid yet lucid colours only heightens the audience senses and draws you into this surreal world.

To further amplify this, is the use of mirrors and reflection. Technically I hate to think how tricky this was to pull off. But serves as a useful metaphor for the constant self-reflection and soul searching of John Wick.

And what of John Wick, a man ridden in grief, a lost soul, emotionally vulnerable, still mourning the loss of his wife? What of Keanu Reeves who completely metamorphosis’s into our anti-hero?

I would say that, John Wick: Chapter 2 is right on the marker!

Personally, I believe every single moment that Wick is capable of being a stone cold killer, yet he is far from one dimensional, there are layers, and complexities and inner conflicts, he is constantly battling with throughout the film.

They say an actor always brings a piece of themselves to the role, and I do believe that Keanu Reeves has bravely dipped into his own passed and loss to help better inform and ground his character.

What of conflicts? Inner conflicts aside. One of the successes of John Wick, were the action sequences. The choreography of the fight scenes were beyond reproach. Perhaps because director, Chad Stahelski’s own background is in stunts, and stunt co-ordination. 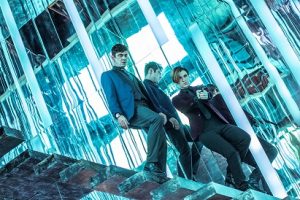 And in John Wick: Chapter 2 expect to see some more nifty moves. You really have to admire the relentless training that Reeves must undergo. But when you put the work in, it pays off. His fluidity and agility takes some beating, and believe me Wick takes some beating in more ways than one!

You can tell that the movie had a bigger budget this time round. The set pieces are bigger, grander, but they’re tasteful, contained and not ostentatious. It hasn’t run away with itself. It feels the money has been used wisely to really create a beautifully crafted film. The whole ascetic has elegance, opulence and class.

It feels that as the original, John Wick director, Stahelski has a huge respect for the film, story and its characters and wants to do it proud, which he certainly has.

The core of the film for me, is self-preservation. The lengths you go to, to save your own life. Remember though this is a film, and made only for entertainment, so please don’t try this at home!

I could continue to write about this film, but what I don’t want to do is rob you of the enjoyment of experiencing John Wick: Chapter 2 for the first time.

Watch with an open mind and heart and enjoy every moment of being transported to a world of eccentricity, opulence, style, slickness, relentless action and an anti-hero you root for with every high kick of the way.

“I see more than a painted canvas,” says Sanitino D’Antonio, as he looks at a picture on a museum wall. And if you REALLY watch John Wick: Chapter 2, then so will you.

Loaded with tons of insightful behind the scenes bonus features to bring you even greater value to your purchase, I would say that, John Wick: Chapter 2 is right on the marker!