The names Luke Skywalker, Princess Leia Organa, Han Solo are ingrained in popular culture thanks to the success of Star Wars: Episode IV - A New Hope, it shot Mark Hamill, Carrie Fisher Harrison Ford to instant fame. But what of characters such Darth Vadar, Boba Fett, those characters whose faces were shielded from view?  All is revealed in Elstree 1976 as we meet the people behind the masks.

Scheduled for release in March, 2018

Currently screening in the UK on Sky TV, and in the USA on Netfilx.

I’d had the pleasure of interviewing them before at The Everyman, Muswell Hill. Jon and Hank are very entertaining, so I knew I was in for a good night!

What I love about the documentary is that, it is less about Star Wars and more about the people behind the masks.

“My remit was, they were in the first Star Wars film, and only the first, and had to have had their face obscured,” said the director.

And five minutes before we were about to go on stage, I was about to meet one, John Chapman, rebel pilot, who was unexpectedly joining us for the Q&A.

More the merrier, and it doesn’t do me any harm to step out of my comfort zone and improvise.

So for the documentary that tells the story of the actors and background artists that appeared in the George Lucas’s indie film turned blockbuster, how mindful were they of respecting their participants?

“We were very,” says Starrs. “That people trusted us, they all expressed different opinions and some were very open.”

Spira continued: “You have to be careful and at the end of the day you kinda go… Well, I edited it morally. So, I just said, I have to imagine that I’m sitting next to the person on the screen. And if I can do that without feeling bad, without any issue of conscience; that was the way to go.”

And Elstree 1976 has respect in abundance, which is one of the reasons I have such an affection for the film.

The documentary focus on 10 individuals. And although they all have approximately 10 minutes of screen time, each. When the filmmakers conducted their initial interviews, each interview was three to four hours in duration.

So I jested with Chapman, that it must have felt like a counselling session.

“It was very interesting when Jon interviewed me. And I’m sure it was the same for the others, is that, he just fired the question and allowed us to talk openly.”

Community is also at the heart of the doc. Not only the community of Star Wars artists, but also the comic con circuit that they frequent to sign autographs.

“Film has this great sort of perception of a human being on the big screen,” says Chapman. “Most of these actors, the A-listers, when you go to these conventions are down to earth people. And it’s nice to get close to them, and see them face to face.”

“Was there anyone who declined to participate?” came a question from the audience.

“There were some people who said no. Err, Kenny Baker was on the phone at one point.” Starrs picked up. “I said Kenny, it’s not just about Star Wars, it will be about your whole life, you know, where you come from, where you ended up. We’d really like you to do it. There was a silence and there was a ‘nah, fuck off!’”

The audience erupts with laughter. As I said, Jon and Hank are entertaining guys!

A point of fact for any indie filmmaker, looking for inspiration for funding a documentary of their own. Elstree 1976, was funded initially out of the filmmakers own pocket, and then via Kickstarter. Additional funds were raised by private investment and the documentary cost £150,000 in total, with most of the moneys paying legal fees and post-production.

And what’s the future for our three panellists, is there a new hope?!

Well, John Chapman is the author of The Adventures of Jonnie Rocket, a series of books designed to educate and inspire children.

Jon Spira and Hank Starrs are now in production with the sequel of Elstree 1976, Elstree 1979.

Elstree 1979 focuses on a whole new community within the Star Wars universe. No not that of the planet Alderaan, but that of The Empire Strikes Back’s, stuntmen.

The documentary itself promises to be bigger and bolder, and will see the likes of Vic Armstrong and Colin Skeaping visiting their old stomping ground, or should I say Stormtrooping ground of Elstree Studios.

As for me I was very happy to spend the evening in the community of Elstree and Borehamwood residents and be the conduit for the wonderful filmmakers, sharing their own stories, anecdotes and experiences of filming, Elstree 1976. 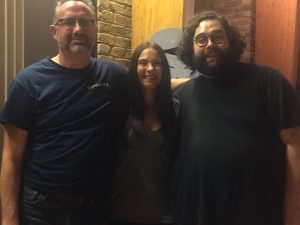 “My remit was, they were in the first Star Wars film, and only the first, and had to have had their face obscured." - Jon Spira