When Nick Park pitched his idea of Early Man, he described it as ‘Gladiator meets Dodgeball’, and that perfectly describes this latest Aardman Animation.

It’s about tenacity, hope, belief. The underdog never giving up without a fight, no matter how enormous the odds.

It’s about the humbleness of Stone Age, versus the opulence of Bronze Age.

It’s about being united, and working as a team.

Dug (Eddie Redmayne), is not afraid to think big. Tired of hunting rabbits, he wants to hunt mammoths, but Chief Bobnar (Timothy Spall) has no such ambitions. The rabbits feed the tribe modestly, and adequately. Life is simple, and there’s no reason to court trouble.

But whether they like it or not, trouble has courted them. Their peace is disrupted by the greedy Lord Nooth (Tom Hiddleston), who intends to use their valley, to mine for bronze. This forces the cavemen to evacuate for safety, and send them to the baron, Badlands.

He happens upon a girl, Goona (Maisie Williams) who will become a faithful companion and ally; but not before accidentally entering the terrifying, overawing gladiatorial arena.

Dug, to avoid a life of mining bronze, pledges to win his valley back. He wanted to hunt mammoths, now he has one; a mammoth task!

Another man looking for a mammoth task, was Nick Park, who had conceived of this story eight years ago.

Early Man is Park’s solo directorial debut, and as such will see Aardman working in a very different fashion than before.

Under a new structure, Nick Park is at the top, helming the production, with two animation directors serving directly below him, Merlin Crossingham and Will Becher. In turn freeing up Park, to concentrate on the actors.

At the core of this story is camaraderie, and companionship. People working as a team, to succeed. And so this can be said of Aardman Animation, as the team have worked with Park for 25 years, and the end results prove their worth.

Talking of teams, arguably the most famous team sport of all time is football, which this tale centres around.

Not a fan of the sport myself, ironically, neither is Nick Park. But in a stroke of genius, he knows that football is a sport that unites people; regardless of their background, creed or colour. 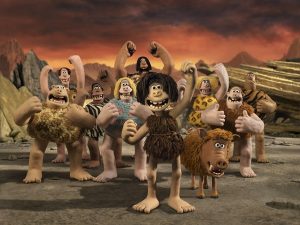 When we first approach Bronze Age Town, it feels like a much more epic film for Aardman Animation.

For a country as diverse as Britain, it was crucial for the director to showcase this. I love how the UK’s many regional dialects are represented in this film.

The joy of viewing any Aardman film, is not only watching the lovingly hand crafted animated puppets, but also it’s incredibly sharp humour.

It took three years to write this script, and it shows, as there is literally no stone left unturned. Wherever you can find humour it’s there, visually and verbally.

Talking of verbal, what of the actors recruited to infuse life into our inanimate objects?

All three of the leads, completely disappear into their parts, and it is very hard to distinguish who they are.

Let’s start with our ambitious fearless hero, Dug voiced by Eddie Redmayne. He worked on the film over a two year period, attending five to six voice sessions. Redmayne does deliver a physical lightness to teenage Dug, but also a resolute, strength and determination.

Goona, played by Game of Thrones’ Maisie Williams, kicks ass as Arya Stark, as she does as Goona. Though in this case she kicks ball, as a skilful, wilful aspiring footballer. Goona is a positive role model. She, like Dug is prepared to think big, and not let being a girl deter her from fulfilling a dream. And she is prepared to work for it.

Who other to voice the villain Lord Nooth, than god of mischief himself, Loki, Tom Hiddleston. He is an accomplished voice actor, and his exaggerated French accent provides a lot of humour. This seems a part to have a lot of fun with, he has genuine menace, and is so unsympathetic, that you have to poke fun at him.

Even when we first approach Bronze Age Town, it feels like a much more epic film for Aardman Animation. And it was. There were 273 puppets, 3,000 handmade interchangeable mouths, and the staff worked across a surface area, totalling the size of four Olympic swimming pools.

The studio known for their more intimate animations, certainly have allowed themselves to think big, and it has paid off too.

It is incredible to think of the painstaking work that goes into producing Claymation, a process that combines clay models and stop motion.

With 40 cameras working at once, on average they shot three seconds of the film, a day. If they achieve shooting a minute of footage in a week, then they’re really on a roll!

Early Man transports us back to a different age, but there is nothing prehistoric about this story, as the themes, humour and entertainment value are timeless.

By Hanane Zahrouni 2 weeks ago