Fall River, Massachusetts August 4th, 1892 Andrew and Abby Borden lie lifeless in their family home, butchered to death by an axe. The only people at home at the time were Lizzie Borden (Chloë Sevigny) and housemaid Bridget Sullivan (Kristen Stewart).

The two state they heard nothing at the time of the brutal attack perpetrated on Lizzie’s father and stepmother. With this explanation too ridiculous for the authorities to believe, fingers all point at Lizzie.

Based on actual events, the truth may never really be known, but director Craig William Macneill (The Boy), fulfils a childhood ambition by creating a plausible re-telling of the events that could have instigated these horrific murders.

“I grew up outside this town, outside of Fall River, so I was exposed and haunted by the story of Lizzie Borden all throughout my childhood. As I grew older she lingered in my imagination, I always sort of questioned if she did do these things that I was so scared about as a child,” says Craig William Macneill whilst in the UK during October’s London Film Festival.

Serendipitously his representative presented him with a script, one that would question and examine the events before, and after these murders.

Macneill had a definite vision for the film: “I really wanted it to be this escalating sense of dread throughout the film, and elegance in order to sort of create that atmosphere of that world.”

He certainly creates this underlying tension as we voyeuristically look in on Lizzie’s life. You can’t deny there is something bubbling under the surface, ready to explode. It made me wonder if the director journeyed into the female psyche and what makes people snap.

“I am really interested where these dark impulses manifest in people.” He continued: “I always wonder if somebody could be born, is somebody a sociopath, or are they pushed so far over the edge. And I wanted to walk that fine line in this film, so you are going into the film and you are trusting her, and all of a sudden you’re taken aback and think, is she a sociopath? Or is she just pushed?”

The 19th century was a very different world for women, and Lizzie doesn’t shy away from that.

”Yeah these men in their lives that denied agency, they denied agency over their own lives, so the only way out for Lizzie was marriage or her inheritance, and neither of which was an option at the time, and so she chose the only way she could to find that freedom (laughs).”

He elaborated: “I really wanted you to care for her and sympathise with her and, but reach a point that all of a sudden questions all the trust you have given her, and in many ways Bridget is our eyes into the film. She comes in this house, she gets to know this family, gets involved with Lizzie and builds this really strong bond and then is taken aback by her and like questions, is this person who I thought she was? Err I trusted you I saw you do this thing, and then I heard you laugh, like are you who I thought you were?”

In a house ruled by an authoritarian father and resentment held towards her stepmother, Lizzie seeks companionship in their newly appointed maid Bridgette.

“Yeah their characters were trapped in this awful house, under this sadistic man in a period where they had little freedom and these two women found comfort, solace and strength within one another and it was through intimacy.”

“They are both so talented they can convey so much without saying a word, I really wanted to explore that in the movie and I had never seen Kristen particularly do such a restrained, err restricted, err restrained,” he continued: “She’s like this spark of energy and it's fascinating to watch her repress that.”

Though young, these actresses that are seasoned and have a massive back catalogue of work, and it shows in their performances.

“Masterful,” the director coins it. “As a director you really encourage and want to bring out this freedom, you know, do what you want, we can tinker as we go, em because they know their characters so well, and they have such brilliant ideas.”

“I was exposed and haunted by the story of Lizzie Borden all throughout my childhood."

It wouldn’t have been uncharacteristic of many men of the period to be authoritarian, but Lizzie is artful enough not to demonise her father.

“He was very villainous on page, so I thought it was important to cast somebody who had a softer side to him. I saw Jamey Sheridan in The Ice Storm, Ang Lee’s film, did you see that? It’s a beautiful movie, I was really moved by Jamey’s performance and it stuck with me for many years, so when this project came about, I thought Jamey would be a really interesting choice, because at first you don’t really think of him a bad person, he did show that softer side, he’s trying to cling on to that power and that control around him and that authority. He’s losing his grip and it’s making him unravel.”

Another character in the film is the house where the murders took place. Unmissable tax incentives in Georgia prevented the filmmakers shooting at the original location which is now a bed and breakfast, but members of the production did brave a night there during pre-production.

Another character in the film is the house where the murders took place. Unmissable tax incentives in Georgia prevented the filmmakers shooting at the original location which is now a bed and breakfast, but members of the production did brave a night there during pre-production.

“It was a terrifying experience being there em, Chloë got so freaked out in the night that the production designer was sleeping in Emma’s (Lizzie’s sister) room and Chloë was sleeping in Lizzies room. The production designer left Emma’s room and slept in Choloe’s room. And then I was so scared cos I was sleeping in the parent’s room that I went and slept in the sisters’ room because it’s combined the two rooms. The cinematographer slept in the stepmother’s room where she got murdered and he slept like, beautifully (laughs).”

Perhaps inadvertently, staying in the house allowed the filmmaker to question the validity of Lizzie and Bridgette’s original account of the event.

“If you drop something upstairs in the attic you can hear it down on the first floor, and we did that. And the fact that these two women were in the house that day, which is a fact; and neither of them heard or saw anything, leaves you to believe that the two of them were in cahoots. Although there are many theories of what happened, I find it hard to believe that they weren’t somehow involved with or saw something.”

Shot in 23 days, Lizzie sees Chloë Sevigny debut as a movie producer and leading lady and although this is a period piece the film itself feels very present.

“There is definitely a contemporary feel to the film within the way it is not told in a chronological order. Chloë and Kristen feel very current, and how we used the score you know, felt modern.”

Craig William Macneill delivers a more than satisfying exploration in to Lizzie Barden’s culpability, Lizzie is delicate, sensual and a tastefully interpreted story. 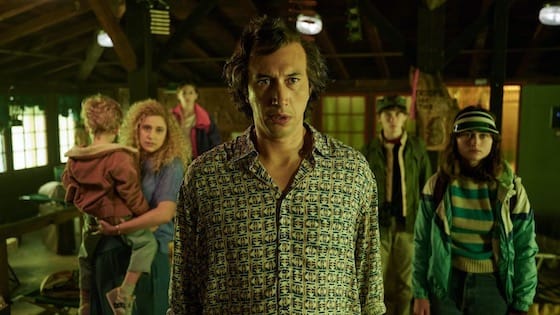