Having studied acting at London’s prestigious Drama Centre, filmmaker Tim Barrow founded Lyre Productions to make contemporary Scottish films. His first film The Inheritance saw an appearance by Tom Hardy (Venom, Mad Max: Fury Road) and won the Raindance Award at the British Independent Film Awards (BIFA). Barrow went on to receive a nomination by the British Academy of Film and Television Arts (BAFTA) Scotland New Talent for Best Producer. As a playwright, his play Union was staged by Edinburgh’s Lyceum theatre, but always bubbling away was his interest in mental health and in particular schizophrenia, a subject which is explored in his latest love story Riptide. Five years in the making I was lucky enough to interview Tim to find out the method in his madness.

The film is centred around mental health specifically schizophrenia, what is it about the condition that drew you to it?

I have no first-hand experience of psychosis but I’ve been fascinated by schizophrenia since I was a kid. Just up from my home village lies Rosslynlee, a former psychiatric hospital. We knew people who worked there, and people who stayed there. I’ve been drawn to tales like “One Flew Over The Cuckoo’s Nest” or the play “Blue/Orange” by Joe Penhall. There are plenty myths surrounding schizophrenia and I guess I wanted to find out what was true. 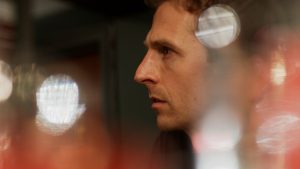 The Oxford English Dictionary defines rip tide as ‘a stretch of fast-flowing and rough water in the sea or river, caused by the meeting of currents’ this so aptly describes the story at the heart of the film doesn’t it?

Yes! The title just jumped out at us. The sea with its tides, competing forces, mystery, awesome power has parallels with psychiatric disorders. Feelings of submerging, drowning, being carried along out of control. It’s also like falling in love. I read that it’s possible to survive being carried out to sea in a rip tide, the key is not to fight it. That fits our story. And I think all humans are drawn to the sea.

Do you think by having your two leads both living with schizophrenia it gave you the opportunity for a more expansive exploration into the condition and view it from differing perspectives?

Absolutely. I hope that comes across. Manifestations of the disorder can be very different, but there are trends to male and female experiences. For example, women tend to have better luck with romantic relationships. The idea that people can experience highs and lows at different times to one another – or at the same time – gave us plenty of scope to chart a unique love story. In our research it was always brilliant to hear people talk about love and relationships – it matters so much. 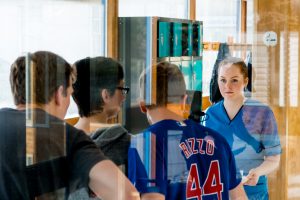 As an actor truth and authenticity are paramount, so I imagine your research into schizophrenia must have been forensic?

We had to discover what we didn’t know. Bust through the myths and misunderstandings. Schizophrenia is nothing to do with a split personality. The name is misleading. As we dug deeper we discovered that truth was always more interesting. 1 person in 100 has schizophrenia. The most common symptom is hearing voices. Art has a habit of elevating its subjects into Gods or monsters – in this context, that’s dangerous and stigmatizing. Better to aim for authenticity. I began by interviewing Professor Stephen Lawrie, Head of Psychiatry at Edinburgh University, and he helped us immensely for 6 years. I met people with schizophrenia, talked with medical workers, went on psychiatric wards, read loads, watched loads. Even when filming and editing, we kept researching.

How important was it for you to infuse hope into a story which could be quite bleak?

Essential. We wanted to show that people with schizophrenia fall in love, have careers, families, deal with dilemmas, tragedies and triumphs that all human beings do. Many people with schizophrenia talked about the positive aspects of their condition. Some saw it as a blessing. Someone said their voices were the best thing that ever happened to them. And in every interview there was always plenty of laughing – which I didn’t anticipate!

“We wanted to show that people with schizophrenia fall in love, have careers, families, deal with dilemmas, tragedies and triumphs that all human beings do."

You have written, produced, directed and starred in Riptide, so without a doubt this project becomes very personal, how difficult is it for you to roll with the tide and leave yourself open to the collaborative process of filmmaking?

It is personal, but collaboration is vital. From the start DoP Robbie Jones and Elspeth Turner helped massively with the script. Robbie had great concepts for shooting scenes – different cameras, different styles. Everyone was able to chip in – it’s a great resource to hear people’s inspiration. We pray for rare accidents, moments of uniqueness, and we got them! The Scottish weather is what it is! But it gave a strange misty, surreal feel to the beach scenes. It allowed us to show Eva dancing in the rain. And then in post I worked closely with editor Callum Warrender and sound designer Dan Johnson – their ideas were fantastic. It’s great when my own ideas convinced others and we adopted them – equally it’s essential to listen when other folk are telling you something doesn’t work! 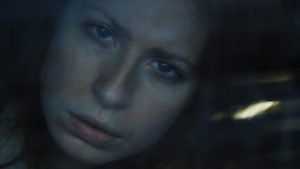 Elspeth Turner delivers an evocative performance as Eva, who battles her own demons. How conscious were you of not only providing support as her scene partner, but perhaps more importantly as her director?

She’s brilliant. I love watching her work. Elspeth has so much energy and passion – she doesn’t need much guidance before she can just let rip. She was very conscientious in her research, very detailed and imaginative in her performance. She got a good feel for the character early, and I’d try to allow space to do her work. Often the conditions were a challenge – like shooting until 4am, or running around in the North Sea in October – but these definitely helped with performance for both of us!

The one thing that has remained constant throughout all your films is your love affair with Scotland and its beauty, even in the most unexpected places. As you have evolved as a director have you enjoyed the process of finding new and creative ways to illustrate this?

Scotland is home. It’s full of beauty, but it has a rugged soul. I’m still working the place out – it’s an amazing setting to tell stories. It constantly challenges me. Film finds people out, in that their true characters get exposed. And filming on location in Scotland – this incredible country, full of contrast, harshness and wonder – we all got challenged and had to bring our best skills.

Pictures speak a thousand words, so did you want to visually illustrate schizophrenia as experienced through the eyes of Jacob?

We did – vivid colours can do that, and the fast editing helps – as Jacob’s mind is consistently distracted and overloaded with ideas, or his focus settles on unexpected things. We kept changing the style of shots – hand-held, steadicam, locked-off, long single-takes – to represent changing moods. Dead birds, bugs, bees, butterflies – in an urban setting – say a great deal about his mood. But the sound was crucial – how to present Jacob’s world of voices, auditory hallucinations, dreams, memories. We had to present it authentically but sensitively. For people with schizophrenia the world can be very noisy, a clamour of competing sounds. But when Jacob and Eva are together, things get really quiet and calm – they can focus just on each other. 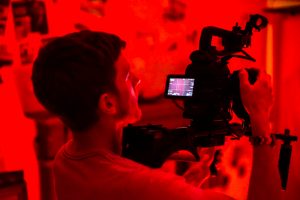 As artists we are constantly on the path of self-development, what have you learned from making Riptide that will better inform you for your next film?

Performance is key to everything. I love being surprised by actors. There was a take where David Whitney absolutely nailed it – different to all the other takes – an unusual close-up shot – but it was phenomenal so we used that for the whole scene. I loved shooting scenes in a variety of ways that only really made sense when assembled together. I’d love to explore more of that. I want to make more films telling stories about psychiatric disorders and battles with mental health. The people involved are incredible – their voices deserve to be heard.