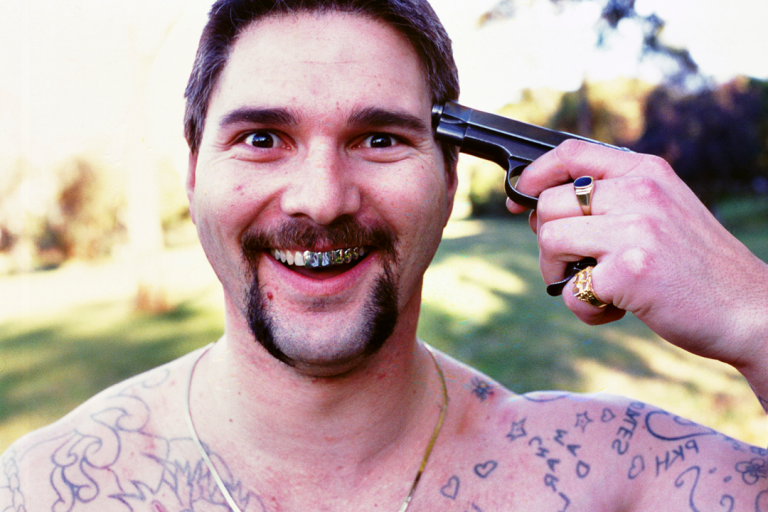 Australian film adapted from the best-selling book From the Inside written by legendary criminal Mark "Chopper" Read. Originally released in 2000, Chopper has been remastered to be enjoyed a 21st Century audience.

It’s hard to believe that it’s been 20 years since the exploits of Aussie crim Mark ‘Chopper’ Read were captured on film by Andrew Dominik. Adapted from Read’s book, there’s something quite visceral about the movie that I recall having a real impact when I first watched it. Two decades on the film has been re-mastered and audiences will have the opportunity to re-visit the critically acclaimed film that arguably introduced Eric Bana to an international audience. I’m a real admirer of Dominik’s work having directed one of my favourite films Killing Them Softly, starring Brad Pitt and more recently episodes of Netflix’s superb Mindhunter. I was lucky enough to catch-up with the director as he reminisces about the making of Chopper, film versus digital and of course more about one of Australia’s most notorious criminals.

I was watching the film yesterday and the film feels as fresh as it was, you can release it today as a film that’s been made today and it feels very contemporary. Did you feel that when you were going back over it?

Yeah. Well (Laughs) it doesn’t feel contemporary for me because I’ve lived with it for 20 years. But I think all good art of any kind feels modern. If you stand in front of a Picasso or something like that it feels pretty modern, even though it’s a hundred years old or however the hell it is. Most stuff does in a way. It’s only stuff that’s bad that dates, right? (Laughs). 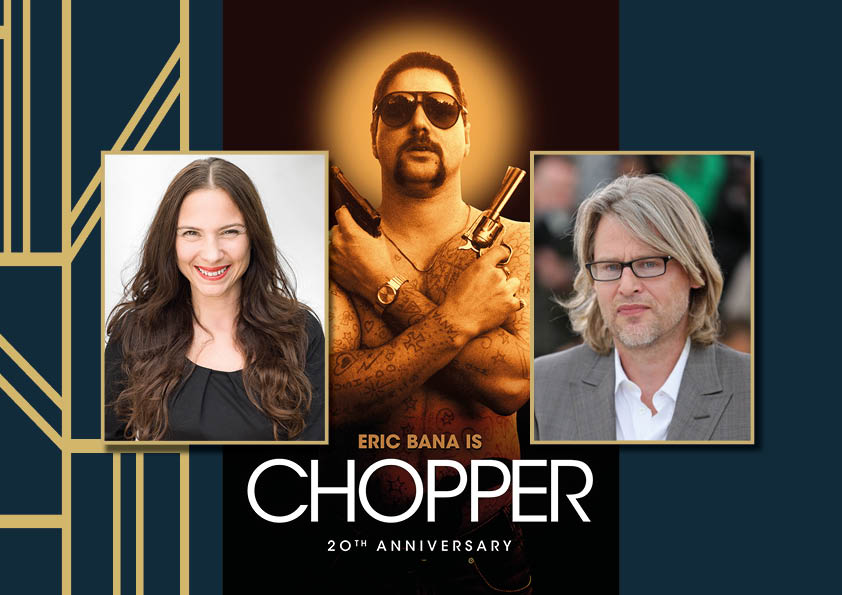 My brother introduced me to Chopper would be 20 years ago, he said, “You’ll love this film.” And I did, so I can understand why you would want to make a film about somebody like Chopper, but what was it in particular that made you want to debut as a filmmaker, making a film about him?

Well there was a certain practical element to it which I thought, it’s the kind of movie that would get made. I was interested in it, but I also thought, ok there’s an audience for this because he’d written that book, the first book, everyone had read it, and it was the most shop lifted book in Australian history. It was so funny at the time. But what really hooked me was the contradictions in it. Mark takes this whole stance that he killed all these people, not a civilian in the bunch and he doesn’t regret any of them. But he would also describe having dreams where the face of his victims came back to him, and you can tell that there was a contradiction there, and that got me interested in him.

Today’s audiences are lapping up crime documentaries and terms like psychopath, sociopath and narcissist have become common. But I’m thinking 20 years ago we weren’t so in tune, psychologists obviously were, but not the public so much. But he is the definition of this narcissistic, psychopath? (Laughs)

Yeah, I encounter a lot of people like that in Hollywood. I’m surrounded by rampant narcissism. I was always interested in that stuff, I always read that shit. But I was sort of, like a wierdo back then, now everyone is into it, right? 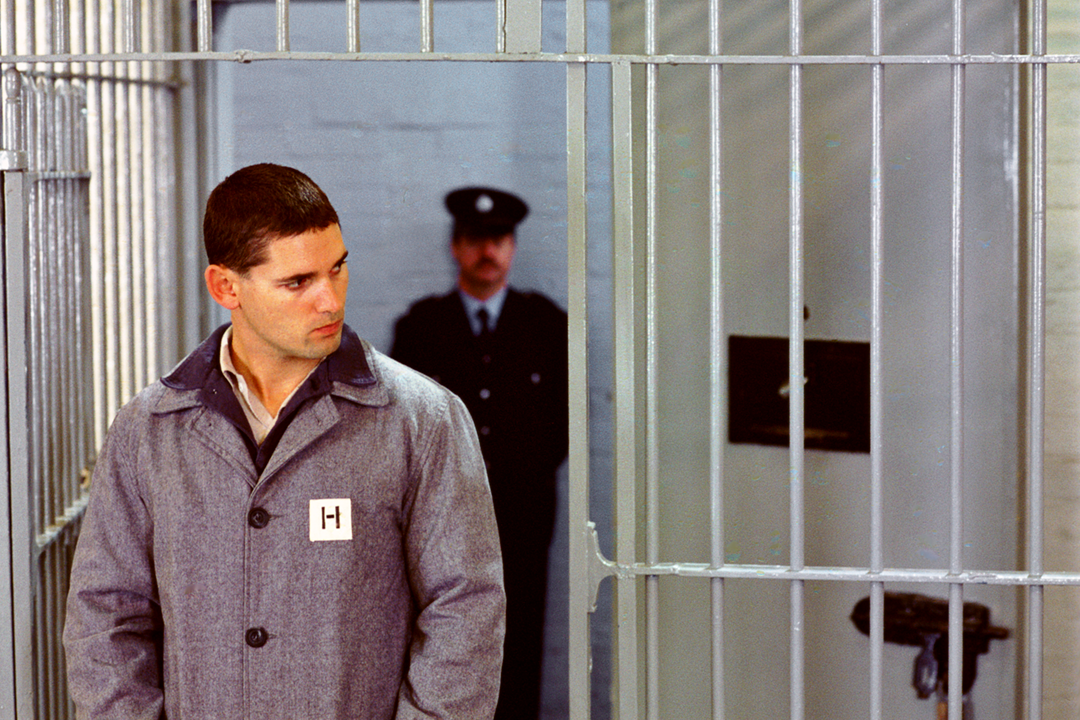 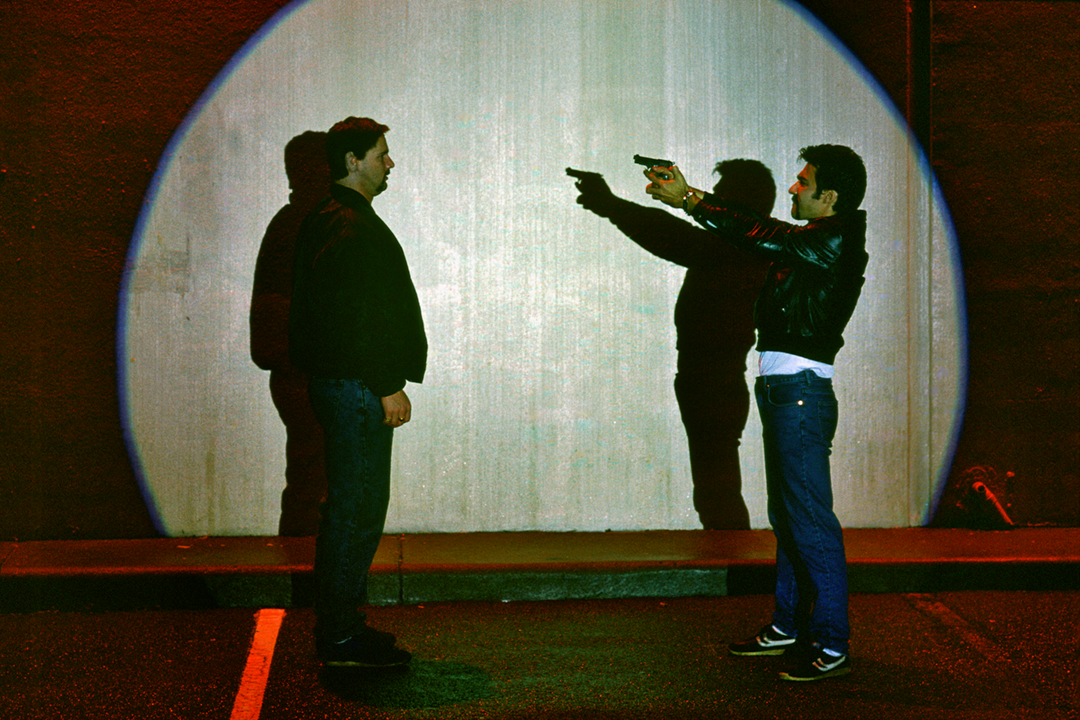 One of the lines of dialogue in the film is, ‘Never let the truth get in the way of a good yarn.’ And really feel the film reflects that in its visuals, the cinematography and the edit choices. There’s a kind of surrealism about it, is that what you were trying to echo?

Well I was trying to get the visual stuff to give you a feeling pretty much. But obviously what happens in the story is Mark faces a transition from being a criminal to being an artist. In that you see him. We basically tell stories to make sense of the world, it’s how we describe the meaning of things; we tell a story about them. With the murder of Sammy the Turk you see him telling stories that make him look better (laughs), that makes him feel better about himself. And each time it’s retold it gets further away from the ugly truth, which I think is interesting.

And I suppose when you are writing a book in retrospect you’ve got that separation of time to reflect. My brother and I made a film called CLEANIN’ UP THE TOWN: Remembering Ghostbusters about the making of Ghostbusters 25 years after the film was made and we noticed time can change perceptions.

Yeah pretty much. I think writing was good for Mark, even though he wasn’t necessarily telling the truth about everything, he’s still having to confront himself on the page. Anyone who writes knows that you wrestle with yourself and you learn shit about yourself when you sit down to write. And I think it is interesting that he never went to back to jail again after he became an author. I think it was a good thing for him. It might have been that he just got old and he ran out of steam, which a lot of these guys do. They’re violent young bucks and then they hit middle age and they can’t be fucked fighting for every scrap anymore.

No longer testosterone fuelled and nothing to prove (laughs).

Did you get to know him quite well?

Well I mean as well as you can know somebody like Mark. I spent seven years thinking about him, I certainly have my opinions on who Mark is. In some ways I felt I knew Mark better than Mark knew Mark (laughs). Which I know is a pretty arrogant thing to say, but I did, that’s really how I felt, that I knew him better than he did. I felt a lot of love for Mark.

I have to talk about Eric Bana of course, he has such a screen presence. What nuances do you think Eric brought to the part?

I think what Eric really brought to the part, aside from the fact that he’s funny, is his sensitivity. Eric’s got these wounded eyes and he’s a deeply sensitive guy, which Mark is too. And I guess there’s a charisma, but there’s also a kind of wound that you can see.

When I was looking through your back catalogue of work I saw that Killing Them Softly, one of my favourite film is 10 years old! Where’s that time gone? (Laughs).

Down the fucking tube mate, down the toilet (laughs). Sitting here getting old. We’ll be dead in a minute (laughs).

“In some ways I felt I knew Mark better than Mark knew Mark. I felt a love for Mark.” 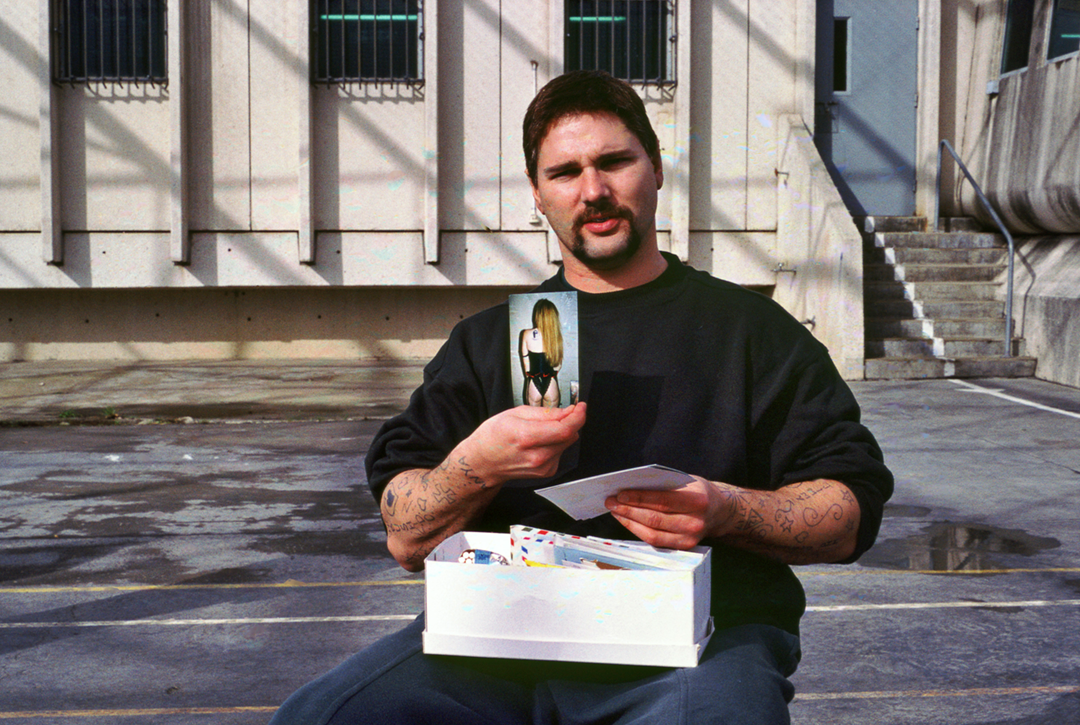 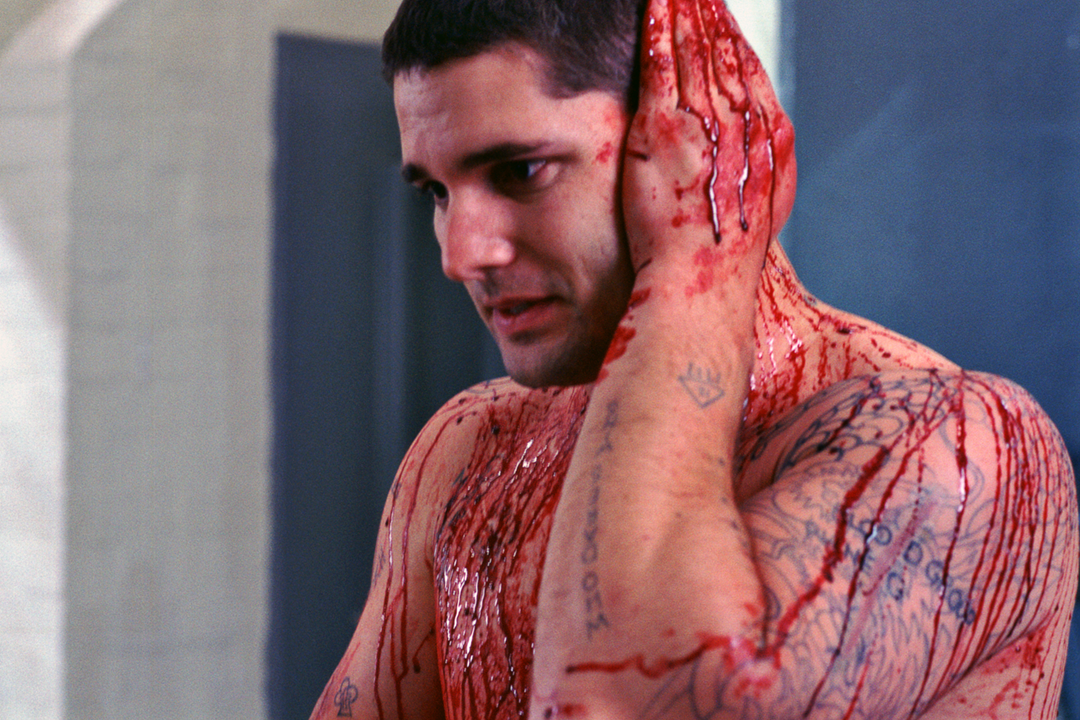 When you look at that film that acting talent is sublime. Are you a director that likes working with actors?

Yeah mate, that’s why we do it right? It’s all about the people on screen. I love all the technical stuff, but in the end it doesn’t matter what a film looks like, nothing matters except for how do you feel about the people you watch. So yeah, I love actors all my friends are actors.

And with regards to the restoration process of Chopper, did you get involved at all?

Yeah, totally. I re-graded it and did all that stuff. In fact what I did was when Chopper was made, it was photochemical; there was no such thing as a DI (Digital intermediate). So you didn’t have all that control, and I made Chopper look absolutely beautiful, I just re-graded the whole thing and it just looked stunning. And then I watched it and I thought, I don’t like this fucking movie. (Laughs). It just doesn’t play right anymore, so I went back and put it back and graded it like it used to look. I undid all the work and I let it be harsh and over exposed here and there, and all of a sudden the film snapped back into being what it used to be. So that was a lesson.

I know this has been restored from a 35mm print, but can you explain some of the process?

Basically what you do is scan the negative, so now it exists in a digital format. I mean the problem with a photochemical negative is it’s fading, it will eventually decay and it’ll be gone. But the digital thing, it’ll last forever. You know, it’s been converted to a DCP (Digital Cinema Package). I don’t think you need to project film anymore, not really, you sort of can somewhere, but nobody does it.

You’ve shot on 35mm, now that we have all these digital tools, how have they helped you progress as a filmmaker and how have those tools helped you express yourself creatively?

The best thing about digital is the mags don’t run out. So you’re not dealing with having to replace a mag every 15 / 20 minutes and you can just roll and that’s great. Because what I do in the beginning of the day is just start rolling and then as soon as you’re rolling the crew are like, “Fucking hell, we’re rolling.” And they don’t get in your way (laughs). And then there’s a sense of barely restrained panic, which you can take advantage of. So you get a lot more done. Now it doesn’t look as good obviously, and there’s a lot to be said for shooting on film, but if you are making a movie that is under financed which I usually am and you don’t usually have enough time, digital is good. Especially black and white, digital is amazing, it’s better than anything they can do photochemically on film. Everything looks like it was shot by Gordon Willis and it’s just because the way the chips are. I think the DCP often looks a bit thin up on the screen, I don’t love it and I don’t think it’s got what film had, not in colour anyway. There’s something magical when you shoot film and you’re three shots under exposed, there’s something that happens to the colour that is unduplicatable digitally.

And are you excited that Chopper is getting a re-release?

Yeah I think it’s wonderful dood, like how many films get re-release in theatres? Not many. But it’s Chopper! Everybody loves Chopper! Right?!!