There’s no disputing that Alexander King is one to watch, his debut feature sees him landing one of the leading roles. Without doubt King has screen magnetism, as he authentically portrays seasoned rugby player and star-crossed lover Warren in a modern LGBTQIA+ love story In From the Side.

There’s something refreshingly open and genuine about the emerging actor which made our interview all the more enjoyable as we gain a greater insight into the application of his craft and approach to his work. 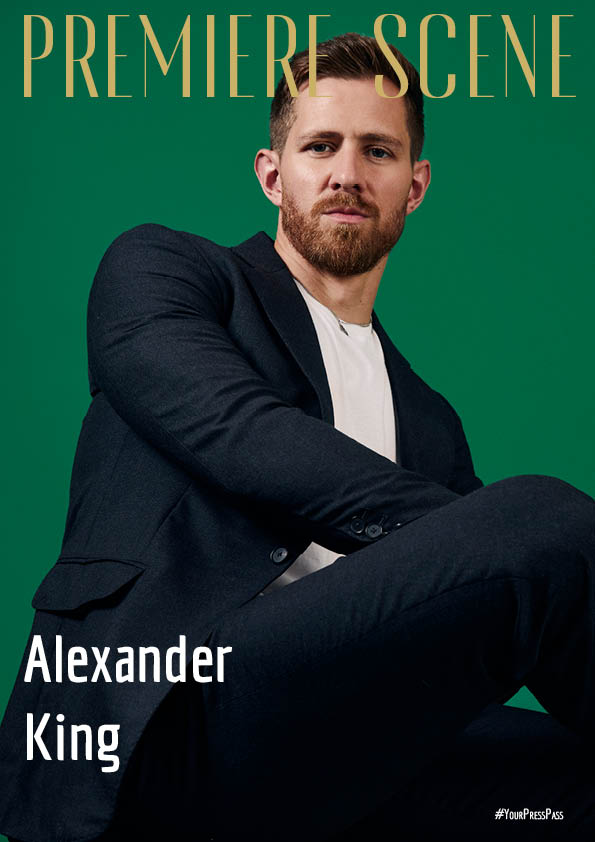 I imagine as your debut in film this script must have been a real gift for you as an actor?

Massively, I think this script would be a gift for any actor. The script itself, the storyline; the way the characters are written as well. I would imagine people would jump at the chance to play a few of them, they’re all so well written, every single character. The movie does focus predominantly on Mark (Alexander Lincoln) and Warren, but the supporting cast and their characters are wonderful, there’s so much more that could be explored and that’s down to the writing.

My first impression when we see your character Warren is he’s definitely an alpha male, is that how you saw him when you read the script.

Yeah, a lot of people see Warren that way, and I did, he read on the page very much like an alpha male. The interesting part for me was exploring why he had those alpha traits and getting to the bottom of his inner, tough exterior, and his arrogant, cocky ways, to find out what was really going on under there. But of course that’s even more fun than just being an out and out alpha. For me it was very much Warren’s disguise and mask to be that alpha, when in fact he was one of the weakest members of the crew (laughs). And that’s how I felt about him.

We definitely see an emotional arc through the film and how the relationship develops, it’s a really nice arc for both the leading characters isn’t it

Yeah they’re both big arcs and they are both different journeys that they go on with different outcomes, and I guess different learnings (laughs) for them both. But it is fascinating to see those unfold throughout the film.

And the story is set around the world of an LGBTQIA+ rugby team, what did you know about that world of rugby? And was that an interesting journey for you to go on?

Yeah it was, because I was aware that such clubs existed, but I didn’t fully appreciate to what extent, and just how many; not just rugby clubs, football, cricket, golf [but] loads of different organisations that are gay and all inclusive. And then I started to discover that straight people play in these teams as well because they much prefer the environment. It was eye opening, of course it was, and you start learning about a whole new world. We were very fortunate, a lot of the supporting artists are rugby playing extras [and] were all active members of gay rugby clubs; so on set it’s fascinating to hear about how the clubs are set-up, and what it’s like. But ultimately they are the same as any other club, they are there because they love sport, or they love the game and they want to play it competitively, and they play it [as] hard and fierce as anyone.

And that of course adds to the authenticity of the film.

Yeah, indeed, because that is something all the characters can have in common in the movie, is the rugby club really matters to them. It really, really does, and that’s the stake that’s on the line for all of them in the movie. And that is what bonds them, regardless whether everybody gets along or not, they’ve all got a common goal in terms of the rugby club and being successful; they all want to do well together when it comes to match day. And of course that makes the drama even more interesting with the personal relationships, the friendships, and obviously the affair between Mark and Warren, that you’ve got them all playing at the same time.

The other thing that I felt was very authentic was the moment when they first see each other, that moment when lightning strikes.

Yeah that instant spark, just from a look in the eyes.

Exactly, and I wondered when you were working with the director Matt Carter, how well did you and Alexander (Lincoln) know each other before, and were you mindful not to over rehearse?

I’m not sure I can answer it terribly well. We had a bit of time together before we started filming because we had done some rugby training sessions and boot camps. That was partly to get people’s hand back on the ball who haven’t played for a while, or some people [who] hadn’t played at all; and a bit of team bonding. But you don’t shoot in sequence either, so I can’t remember particularly the order of things when they were shot, but that could have been towards the end of the shoot when me and Alex had developed much more of a rapport. But what I say in terms of all the scenes and getting those moments when sparks are flying; all the chemistry, all the passion ultimately came down to Matt’s brilliant direction, and the comfort that he gave me and Alex, and the freedom he gave us to be creative on-set was massive. And it hugely helped that me and Alex hit it off in real life. So from the moment we first met each other, we might not [have] looked at each other quite like that, but we got on and hit it off. There was an instant chemistry between us as Alex and Alex, and that really, really helped, because we got to know each other, and developed an emotional connection and we had a laugh. And so for all those moments it made it easier to carry things over.

I was going to ask you about that. Within any relationship when you first get together it’s physical and it’s passionate, which is captured very well on screen. But this is an emotional journey as well, it isn’t just about lust.

Yeah, it starts that way for sure. It starts with lust, but then as you’ll know feelings can develop very quickly, and they certainly do in Mark and Warren’s case. And maybe it does start as a physical and lustful attraction, but it develops and they really do fall in love.

The film is beautifully shot and crafted and there’s attention being paid to nuance, picking up on those tiny little looks and glances that we can all relate to.

Yeah I always enjoy watching actors when they’re not speaking and watching characters when they’re not speaking. And when I was training that was always an interesting thing to discuss. I love it, I actually prefer watching moments where you see characters listening, or thinking, or processing something (laughs), reading their inner monologue, quite often can be far more interesting than what comes out of their mouth.

It’s that inner life isn’t it?

Yeah exactly, it sounds a cliché but it’s show not tell, and hopefully that comes across.

“I actually prefer watching moments where you see characters listening, or thinking, or processing something.” 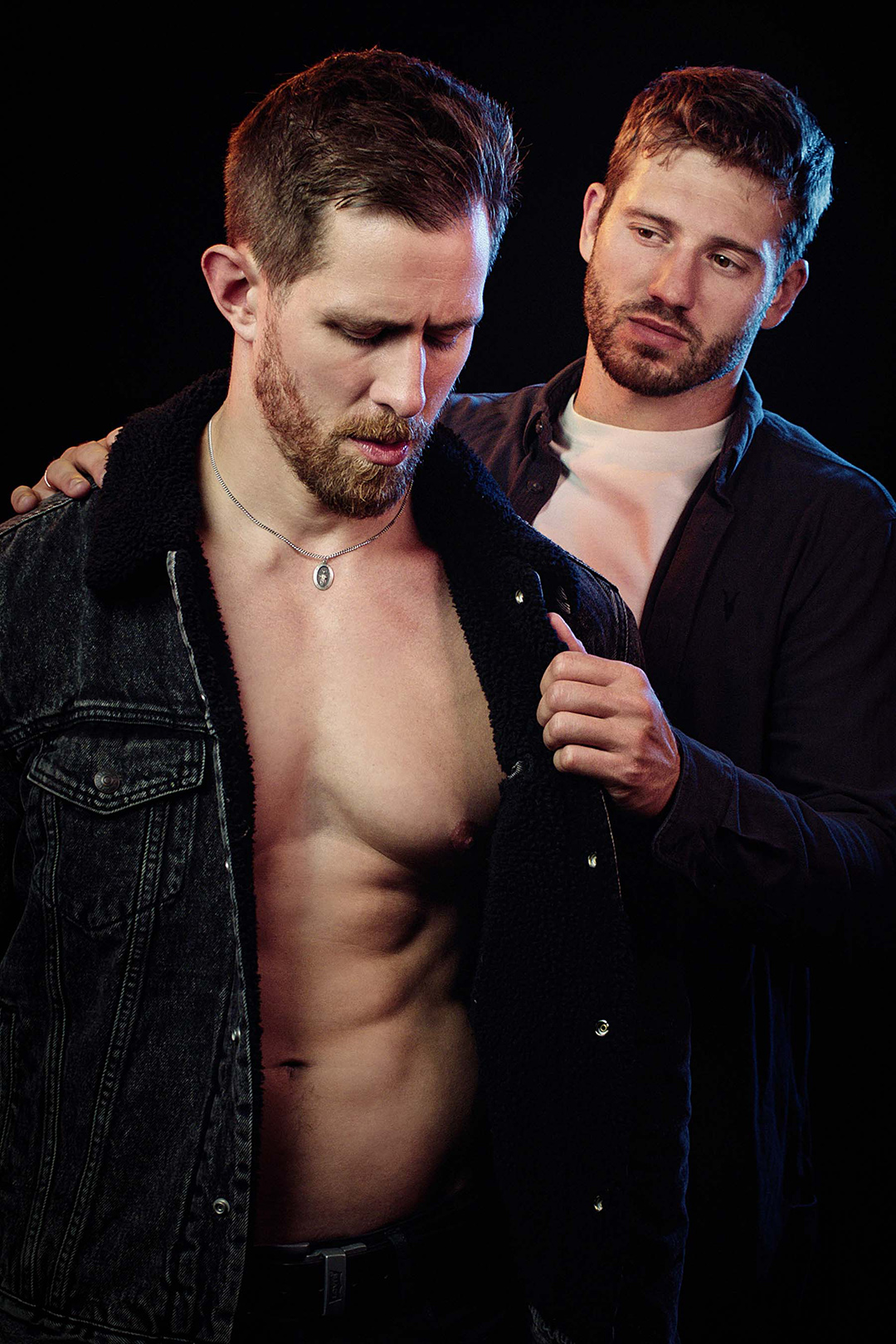 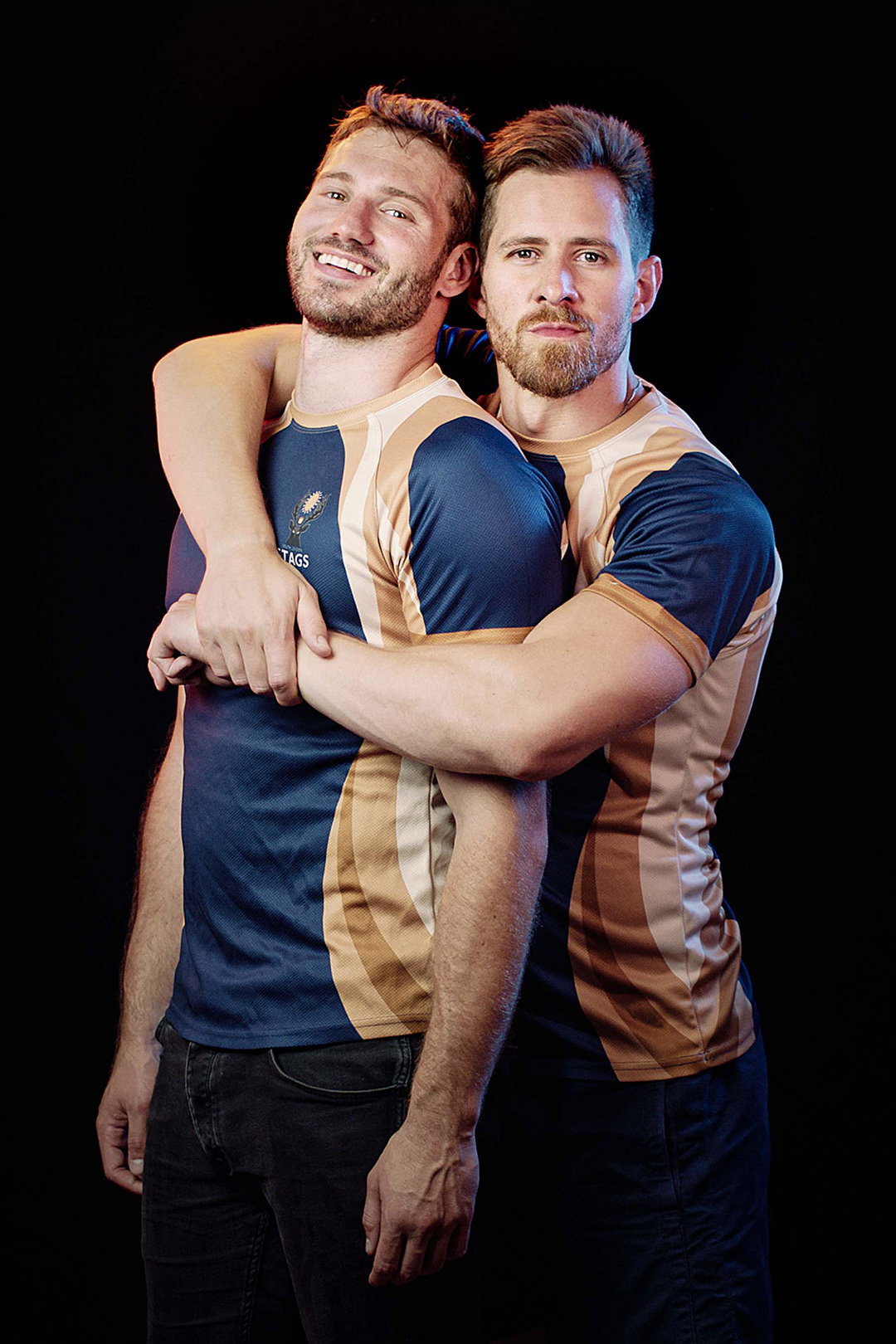 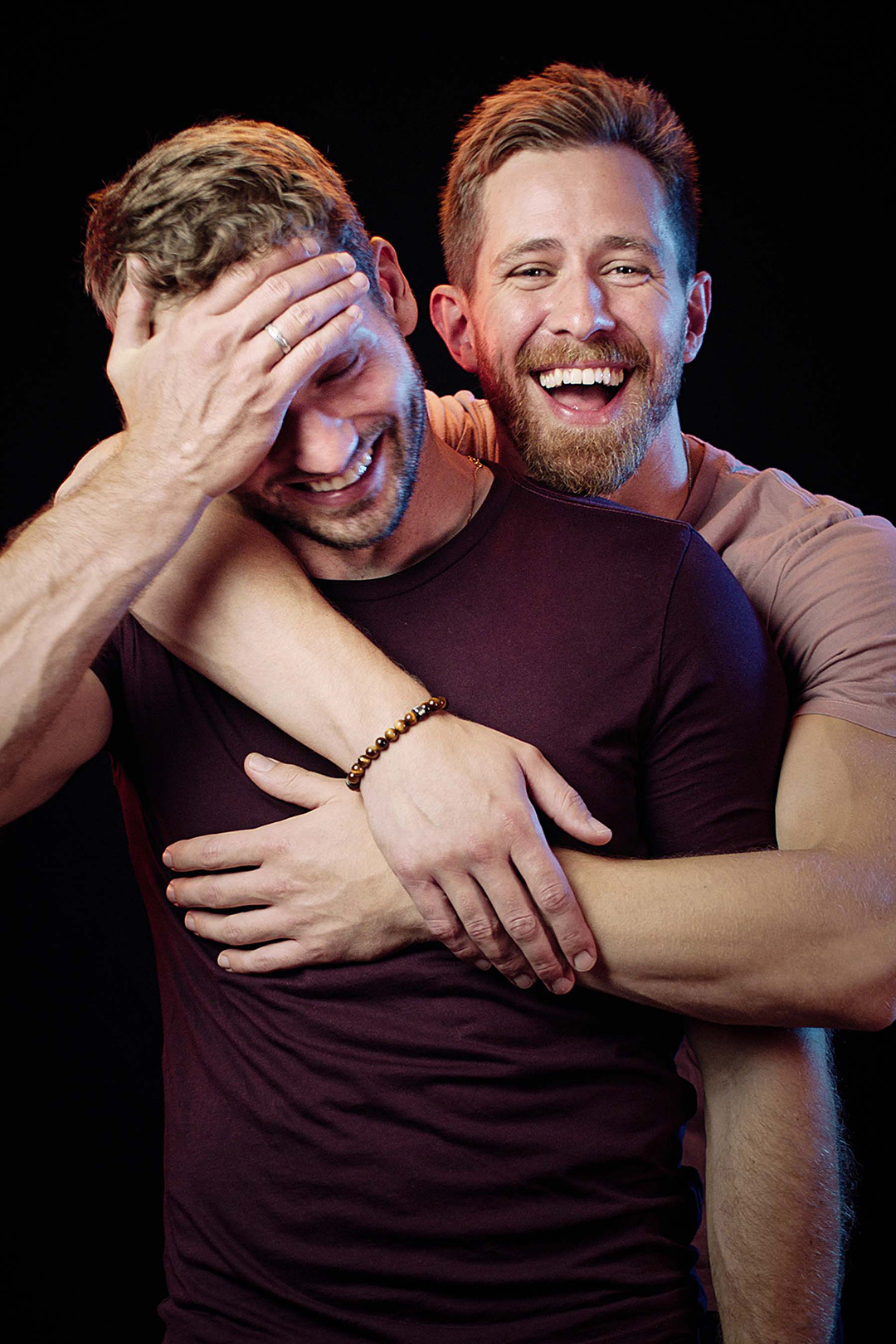 And the film does show the passion and the intensity of their relationship and with this being your first feature film was it difficult to play the sex scenes and was the director mindful of respecting you as actors?

Yeah of course. And naturally for me I’m just a really don’t care kind of guy about such things (laughs), I never really have. So I’m automatically very comfortable going into it. But with regards to the more intimate, passionate scenes, it was great. Before the camera got unpacked that day, me, Alex and Matt had the discussion about what mattered written down, and what we wanted to achieve, and what we felt comfortable with. We got to throw in a bit of our own ideas. And Matt was brilliant, he kept a very quiet set that day, there was nobody in the room that didn’t need to be there to give us the space to work. It doesn’t sound terribly romantic but it’s like choreographing a dance almost.

Yeah exactly, and film is technical.

And as this is your debut feature have you got any advice that you can give any other emerging actors that are breaking into the industry, or having got to the other side of making this film, what would you advise yourself?

(Laughs). I don’t ever think I’m in the best place to advise other actors on what they should do at various stages of their careers. I think, I know it is difficult for a lot of actors and just because I’ve done this movie, I haven’t successfully booked my last few auditions, ones that I really, really wanted and I’m still facing disappointments. I think I’d tell all actors whatever stages they’re at and whatever they are going for, to enjoy every part of the process. Enjoy auditioning even if you are not booking work and have fun with it because I think it’s such a difficult career. It can so many times not be fun and I think if you lose sight of that fun part that’s a bad place to be. So have fun with it and care less, that’s what I told myself early on, ‘don’t worry about it, still give it your all, still give it your absolute best and be passionate, but ultimately don’t care, have fun and shake it off, be tough and just keep going.’ But I’m not guaranteed to walk on to another set, no actor is.

You’re only as good as your last gig as they say (laughs).

(Laughs) And sometimes when if you are brilliant in that, you’re not necessarily going straight on to another one and that’s the case for some huge actors that did some amazing things. Olivia Colman had a huge break in her career where she didn’t work and now she’s winning Oscars. It’s a proper game of hang tough.

IN FROM THE SIDE

currently showing in cinemas across the UK & Ireland

With special thanks to JadeEast PR

In from the Side - Official Trailer

Tags: actor, Alexander King, Cover, In from the Side, interview