Enter into The Square with an open mind. Go with the flow, enjoy the satire and you will find it a unique, intelligent, rewarding social study, that encourages self-reflection.

Having accepted an invite by Artificial Eye to my first film screening of the year, The Square was accompanied by a Q&A with the film’s director Ruben Östlund.

As a moderator myself, I do love a filmmaker Q&A, and so I looked forward to hearing more about this highly anticipated movie. A

In the opening scenes we see a bumbling journalist Anne, played by Elizabeth Moss (The Handmaid's Tale, Top of the Lake), as she interviews Christian, who heads up the Museum of Modern and Contemporary Arts.

I have a sneaky suspicion, that the 35 year old actress channelled her own encounters with journalists in preparation for this role.

It serves as a nice introduction to our central character Christian, played by Claes Bang (The Bridge, Borgen). It also sets up the humour, infused throughout the film.

‘The Square is a sanctuary of trust and caring,’ and is also the new exhibition for the museum. The preparations of this are all consuming, but so are the event’s in Christian’s life wrapping themselves around this fully formed film, which exemplifies how our actions have consequences. 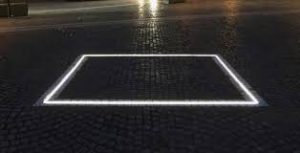 Christian, on route to work is pick pocketed; but it’s the retrieval of the stolen items, that will incite much of the drama in this movie.

I love how Nordic film never ceases to be daring enough to mock, and dispense with political correctness. In this case, the pretentious world of contemporary art, gives plenty of opportunity for satire.

“We, as a museum, shouldn’t be afraid to push the boundaries,” says Christian, and the same can be said of the Cannes, Palme d'Or winning film. As for all the film’s structure, it refreshingly dispenses with formula.

In fact, where I normally like to make notes when I’m reviewing a film, I found myself putting my pen down, just going with it, and inwardly digesting.

The Swedish director confesses to having a deep rooted interest in sociology, and as such, his films are very much a social commentary.

The performances are very naturalistic, which was much encouraged by the Force Majeure director, who spoke of not wanting to hear his actors suggesting what ‘their characters would do’, but preferring to see a more ‘litmus test effect’, where upon his actors react to the scenes, as they play out.

Östlund had always imagined his film opening at the Cannes film festival amongst the glitterati dressed in their finery, echoing a scene in the film. A scene which will become an uncomfortable watch. Featuring Planet of the Apes performance capture artist Terry Notary, he enters the room embodying a monkey, with all its basic instincts. Observing how human beings respond and react to this heightened performance is an interesting study on behaviour as a whole.

It is no surprise that The Square was awarded Cannes highest prize, as the film is utterly original. So I encourage you to jump out of the box, and go see The Square.

Claire Bueno is a film journalist, presenter and interviewer, having moderated BAFTA and Apple Store Q&As and hosted Comic Con panel talks. She has interviewed high calibre artistes such as Tom Cruise, George Clooney, Sir Anthony Hopkins, Sigourney Weaver, Nicole Kidman, Emily Blunt, Samuel L Jackson, James Cameron and Andy Serkis. Having studied with the London School of Journalism, she received a diploma with distinction in Freelance and Feature Writing and has written for 1001 Movies You Must See Before You Die and Curzon Magazine. Additionally, Claire is the producer of the feature documentary CLEANIN’ UP THE TOWN: Remembering Ghostbusters which will be released in 2019.

By Scott J. Davis 3 weeks ago