Starring Colin Firth and Rachel Weisz, the Mercy is the compelling true-story of Donald Crowhurst, an amateur sailor who followed a dream, in an attempt to circumnavigate the globe single handed.

“Dreams are the seeds of action,” says inventor Donald Crowhurst (Colin Firth). A man who dreamt; and a man who courageously set sail solo, endeavouring to circumnavigate to globe.

Having accomplished designing and fabricating a radio direction finding device, called the Navicator, Donald Crowhurst is in need of self-fulfilment.

Future circumstances will dictate, that he will also design and fabricate a story, which will unwittingly put the amateur sailor on everyone’s radar, in this riveting true-story, The Mercy.

It’s 1968, and newspaper the Sunday Times announces a competition: The Sunday Times Golden Globe race. A £5,000 cash prize will be given to the first person to circumnavigate the globe, single handed.

No qualifications necessary, the only rule stipulated, is that the boat has to depart between the 1st June and 31st October 1968, following the Clipper route. Forcing competitors to pass through the Southern Ocean, during its summer.

This opportunity is too tempting to resist, this is the adventure Crowhurst’s been waiting for; the time has arrived to finally make his family proud of him.

His deadline is tight, but Crowhurst engineers and commissions the building of a trimaran, and calls it the Teignmouth Electron.

His deadline is so tight that when Crowhurst, and the Teignmouth Electron set sail on 31st October, the multihull boat, is not complete.

Having used the family home, and his business as collateral, before he even embarks on his journey, Crowhurst is under unsurmountable pressure.

But this is not only a story of a race around the world. This is a story of isolation, and the mental journey of a man, destined for doom.

It feels only fitting that a director whose background is in documentary filmmaking should helm this project. And I do feel that James Marsh has endeavoured to make a film that is as faithful, and accurate, as it can be to the truth.

In the film, Crowhurst’s wife Clare modestly states “It doesn’t make a good story, but the truth rarely does,” but in this instance, I would have to respectfully disagree as The Mercy, is more than a good story, it’s a great one.

As the son of two psychologists, it would appear only natural that the screenwriter Scott Z. Burns would anchor the story in a psychological journey, as well as the physical journey of voyaging alone.

Marsh himself studied the psychological effect of prisoners, who experienced solitary confinement for a period of six months. 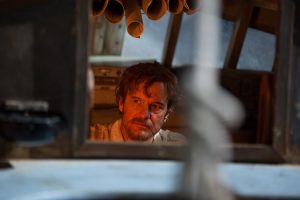 This preparation I do believe was vital, to be able to depict Crowhurst sympathetically, and for the story to remain buoyant.

You also need an actor with the capability to endear an audience, and who better than Colin Firth.

This is such a British story, and Firth optimises British gentility and sensitivity. He was the perfect casting.

The Academy Award winning actor, is not a sailor himself, so he had double the trouble of rising to the physical and mental challenges of the role. And as such battened down the hatchets for some serious research, listening to tapes that Crowhurst himself had recorded for the BBC, whilst on route.

I sit and think how chilling that must have been, and how much a greater burden of responsibility it must be for an actor, ensuring he protects and honours Crowhurst’s legacy. Firth accomplishes this.

The same can be said for Rachel Weisz’s instinctive portrayal Clare Crowhurst.

Integral to the story is that of family. Donald was a good husband, and father. It is his devotion to his family that motivates his course of action.

Perhaps in retrospect, and perhaps against Clare’s better judgment, the love she has for her husband dictates that she must let him go, and fulfil his dream.

This bravery and stoicism oozes out of Weisz, in a very physical way. I urge you to observe her expression, and subtle body language; it speaks volumes.otivates his course of action.

After seven months at sea, the Teignmouth Electron was found abandoned on the 10th July 1969, off the coast of the Dominican Republic, destined never to return with Crowhurst to the seaside town of Teignmouth, in Devon.

The Mercy is a tribute to the heroism of a man not afraid to dream, who had the courage of his convictions, and who was swept along in so many ways, to the point of no return.

“I think we all got a little obsessed with it because it is such an extraordinary tale." - David Thewlis