Frankie is lacking in any direction. The times are uncertain. His father is dying of cancer, he lives in a town with no prospects, and of late he is drawn to cruising men online

Available on DVD from 5th February

In the film we will see a window into a summer of his life; the passing of his father, his greater dependency on drugs, and the exploration of his sexuality.

The story is set in a working class district of Brooklyn, New York. In fact, the name Beach Rats, is a direct term referencing young delinquents who aimlessly hangout around Gerritsen Beach, Brooklyn.

Even in the present day, Frankie lives in an environment, where it is not socially acceptable to be openly gay amongst his contemporaries. So Frankie still unsure of his sexual tendencies, begins to meet men off the internet.

He may not be convinced of his sexuality, but the one thing he does know, is that he likes older men.

Obviously for any film that explores a person’s sexual awakening, there are going to be scenes of a sexual nature. But for director, Eliza Hittman these intimate scenes are designed to provide a further insight into Frankie’s personality and evolvement. They are not designed to be gratuitous, or provide cheap titillation.

Watching the film, feels like Beach Rats is in part a personal story, based perhaps on the director’s brother.  And I did wonder at times whether Frankie’s younger sister maybe the director at that age, and we are somehow witnessing aspects of the story, through her eyes.

And so Frankie idles away his days with his reprobate mates, taking drugs, playing handball and lazing around the beach; basically busy doing nothing. Until he meets a sparky girl called Simone, played very competently by Madeline Weinstein.

Then begins a dangerous game of an internal tug of war. Who is he really trying to convince that he is heterosexual? His friends? His family? Or more importantly himself?

Hittman goes the extra mile to anchor her story in reality, by casting local young men of Brooklyn to play Frankie’s friends. But the responsibility of carrying the film, would go to a British actor, Harris Dickinson.

Hittman goes the extra mile to anchor her story in reality, by casting local young men of Brooklyn

The London Academy of Music and Dramatic Art (LAMDA) graduate, was apparently instantly drawn to the script and to the conflicted, Frankie.

For me the London born actor, delivers a compelling, instinctive performance. Frankie is not necessarily emotionally detached, but perhaps lacks the maturity to processes his emotions. And you need a remarkable actor, with the ability and range to deliver this kind of nuance. He lets you in, but he doesn’t, his sense of mystery is the hook.

If I be honest, it is Harris Dickinson’s performance that sells the film, and I’m excited to see how his career evolves.

Do not expect a traditional format of a film, with the conventional beginning, middle and end. This is more of an excerpt in a particular period in a person’s life. So there’s no Hollywood happy ending, or some miraculous epiphany of how he is going to turn his life around. No, because in life, realistically that doesn’t always happen. So the fate of Frankie, is left in your hands to decide.

I would imagine in this film about self-acceptance, there will be many adolescents that will find Beach Rats, and specifically the character of Frankie very relatable. 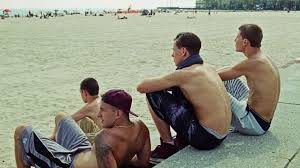