Forced into early retirement a Russian ballerina Dominika Egorova is recruited by Russian intelligence service to become a ‘Sparrow’, an operative trained to use their bodies and power of seduction as a weapon. But what will be her ammunition when she encounters a CIA agent on her first mission?

Based on the book by Jason Matthews

The Russians, in an attempt to outwit the Americans, send their most resourceful intelligence agent to use her powers of sexual seduction, to lure a CIA operative into disclosing the name, of their double agent.

With an invalid mother to support, her persuasive, manipulative uncle, Vanya Egorov (Matthias Schoenaerts) provides a solution. And so, the Russian dancer, has no other option, but to join the Russian intelligence service, and become a ‘Sparrow’.

Sparrows are unique. Men and women chosen for their beauty, are then trained to use their bodies, and power of sexual seduction, as a weapon.

Dominika shows more than great potential, and having conquered mind over matter, she is sent on her first mission.

There is a mole within Russian intelligence, and he or she, is working with the Americans. So Dominika is sent to use her ‘powers of persuasion’ on CIA agent Nate Nash (Joel Edgerton), who is operating out of Eastern Europe.

Nate is no fool, and what ensues is a film full of psychological twists and turns, with 'intelligence' literally at the centre of it!

Red Sparrow is an entertaining, gripping, spy thriller that really keeps you on your toes.

There are captivating performances by Jennifer Lawrence, Joel Edgerton, Matthias Schoenaerts, Jeremy Irons and Charlotte Rampling, who all bring their own intelligence. The multi-layered characters, are so skilfully played.

Not taking anything away from our two leads, but Matthias Schoenaerts is outstanding. I’m not sure I really want to delve into the psychology, of how he prepared for his role. But whatever it was, it convinced me. 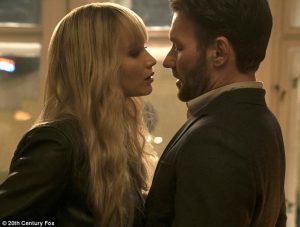 Director Francis Lawrence had originally thought of casting someone older, but he made the right choice, as casting a younger man makes his part slightly more sinister.

The Hunger Games director had read the book Red Sparrow, written by ex-CIA agent Jason Matthews, and knew he had to adapt the film into a screenplay, with Lawrence as the femme fatale.

Since being a boy Joel Edgerton has always had a fascination with the world of spies and espionage, so he has landed his dream role here! And he has the versatility, to pull it off.

The film succeeds for me, because I was constantly questioning who could be trusted. And the ending was spot on!

Be in Red Sparrow for the long haul, as the runtime stands at 2 hours 16 minutes, but I enjoyed it so much, the time flew by!