Sophisticated, contemporary who dunnit, which captures the essence of a good old fashioned murder mystery and then takes it to the next level.

If you’re like me and have grown up watching, reading and utterly immersing yourself in fictional crime then Knives Out is for you!

Murder Mystery writer Harlan Thrombey (Christopher Plummer) finds himself at the centre of his own crime conundrum; was his death a murder or suicide? Enter Benoit Blanc (Daniel Craig) to determine the truth and uncover that if indeed there was foul play, who within the avaricious Thrombey inner sanctum is the culprit.

Knives Out is predominantly set in a sumptuously maintained country mansion. Think Cluedo; Coronal Mustard, in the library, with the dagger!

To celebrate the author’s 85th birthday all his family are in residence which not only allows for a host of suspects, but better still for audiences to enjoy the performances of this scintillating ensemble.

For sure this is a strong, tightly written script with a sophisticated plot, but this truly is an actor’s piece, rich with nuanced, captivating performances. Jamie Lee Curtis, Don Johnson, Chris Evans and Michael Shannon are just some of the marquee names to headline alongside James Bond himself Daniel Craig. Praise must go to Ana de Armas who totally holds her own and is utterly magnetic on screen.

Writer / director Rian Johnson first conceptualised the idea for the film over 10 years ago, and if like me you have a great interest in the whole film making process, then you won’t be disappointed as there are a wealth of bonus features which go into great detail of all aspects of the making of the film.

For those of you who may be wondering why buy a film once you know the outcome? Well think again. Having seen Knives Out on several occasions I’ve always found something new to discover, clues I’d missed, bread crumbs to follow and performances to delight in.

For a film over two hours long, time does fly. The editing is sharp, enhancing the well-paced trajectory.

There is much dry wit throughout the film, particularly from Don Johnson who really is a scene stealer and such a joy to watch. I could be wrong, but everyone looked like they were having a good time making Knives Out, which does translate on screen.

With a sequel confirmed I do believe there is room for Benoit Blanc, to sit alongside other super sleuths such as Sherlock Holmes, Hercule Poirot and Miss Marple.  And so with the Blu-ray out, I recommend you get your wallet out and invest in Knives Out! 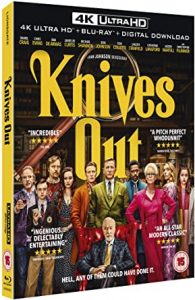 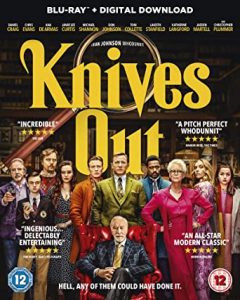 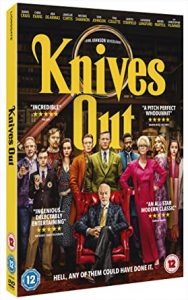