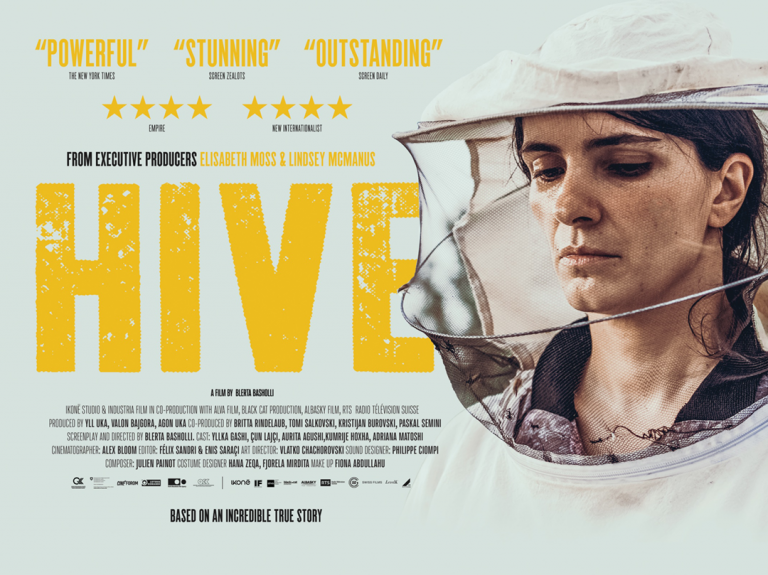 Set in the aftermath of the war in Kosovo comes Hive the inspirational true story of Fahrije Hoti. Living in a patriarchal society, with a husband still missing and a family feed, Hoti defies her adversaries by enterprisingly going into business for herself.

In my career as a journalist I have had the honour of meeting many inspirational people, two such examples are writer / director Blerta Basholli and actress Yllka Gashi. Their film Hive tells the true story of Fahrije Hoti who defied adversity in the aftermath of the war in Kosovo and inadvertently became a beacon of inspiration.

Basholli and Gashi, themselves have experienced the horrors of war and I think quite unexpectedly found themselves having to unearth emotions they both felt they had long since reconciled with. I sincerely hope through making their film they found it a cathartic experience, one thing is for sure they harnessed these emotions and created a film that handles its subject matter with great dignity and respect.

They spoke to me of their admiration for Hoti the queen bee who pragmatically recruited the females within her community to work together in harmony to secure a stronger future for all involved. But I would like to speak of my admiration for the erudite filmmakers who defied their own odds and whose story I have the pleasure of sharing with you.

Yes I am and thank you, thank you for the kind words. It’s always a pleasure to hear nice words about Hive because it was a labour of love and dedication, it took us almost 10 years from the idea to making the film. And it is so rewarding that it had the success it’s had and it’s still showing in a lot of different places in the world and we get nice feedback and it just warms my heart and I love it. Its great (laughs). 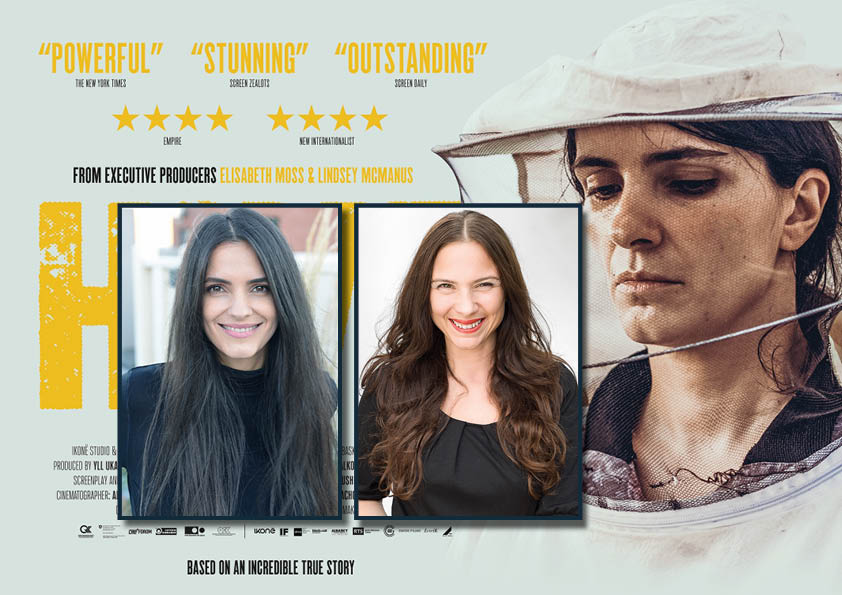 It’s an amazing project for you to be a part of as an actress, because you have been there from the inception, you met with Fahrije and Blerta and I would think a unique opportunity for an actor to be so wholly integrated into the project. Did it feel like a gift?

It did, it did actually. We met with Fahrije in 2011 and I knew her story way before we met her in person because she was on TV a lot and we knew what happened in Krushë e Madhe during the war in Kosovo. I also tried Ajvar and I loved it, so I was a customer and I already respected her and liked her as a business woman. But when we met her in person, she changed the perspective completely because she was a woman who had been through so much in her life and somehow you could see the pain, but also the resilience. And ever since 2011 from that very first meeting for me became a mission to honour her, and I felt always very lucky and privileged to be the one to have this opportunity to portray her. So during the years from 2011 to 2019 when we shot the movie I thought a lot about her, I watched a lot of her interviews and documentaries about her and about Krushë. And even though so many things happened, I moved to the US, I became a mom, Blerta became a mom twice and life happened, things changed. But on the back of my mind Fahrije was there, I was imagining myself as her, if I was going through something difficult in my life, I tried to think what would Fahrije do? So she was an inspiration, she still is to this day. So it was definitely an honour to portray and learn from her.

And what’s so beautiful about your performance is particularly in the beginning she’s so contained, she doesn’t know whether she’s a widow or not, she’s having to support her family, she really has the weight of the world on her shoulders. And as the film progresses she flourishes but in such as subtle way, was that exciting for you to go on that journey, of play someone who is contained but blossoms towards the end?

Yes, yes she does. As an actor I did a lot of TV in my career, I was a part of a show, an Albanian Sit-com for 10 years. So to play someone as serious as Fahrije with that kind of background, with that pain, with that resilience. It was very interesting and at times overwhelming because first of all physically I had to tame my energy, my expressiveness, not to talk with my hands, not to show a lot on my face which was hard a bit. But it was very rewarding and I learned that silence can be very powerful. We do read about these things and sometimes we need people who are quiet, but to try and become that quiet person, who is very strong with silence was something very, very interesting as an actor. I learned from her so much, we take so many things for granted, and there are people just like her that have been through so much, and they come to a stage in their life and they never take anything for granted. I was ready for Fahrije because I waited for this character to come to me for such a long time. We didn’t shoot the movie chronologically, so I was a bit hard to stay in those emotions, to hold them. For example one day we were shooting a scene where all the women are dancing and we were laughing for real and it was fun. And then that same day we shot a scene that I had to cry. It wasn’t easy, but it was beautiful. It was like an acting masterclass and I loved it and I appreciated every single second of being on set because the cast was amazing, the director, the crew was phenomenal, young people, but hard working. So I really feel lucky to have been part of this project. 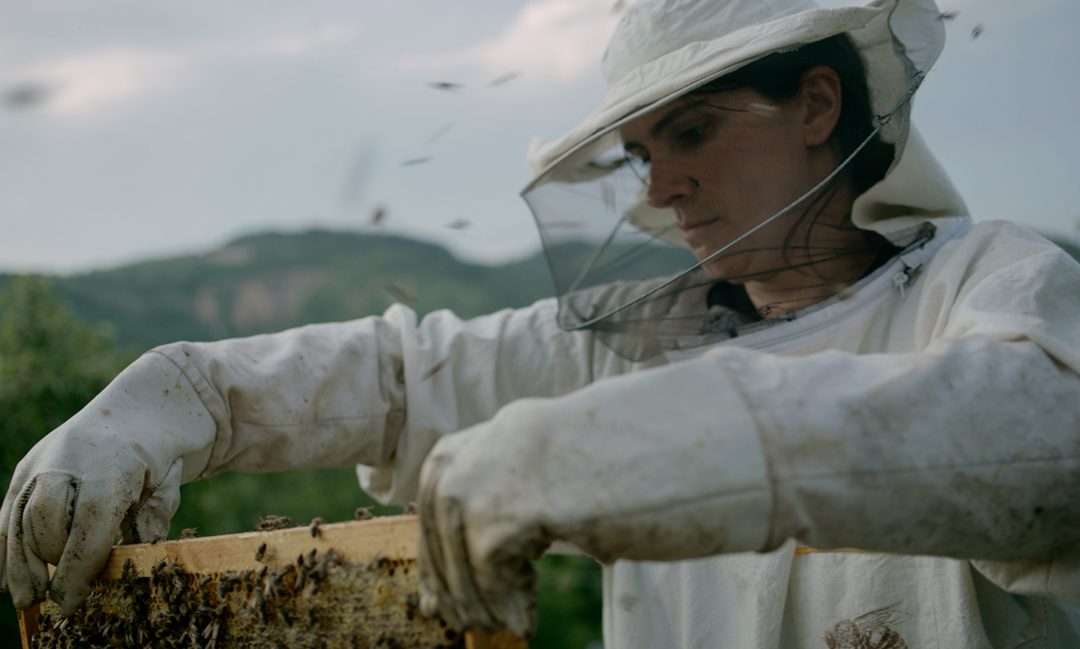 The film is called Hive and the bees and the way that they work together does serve as a metaphor for the story doesn’t it?

Yes absolutely she was the queen bee and she formed her hive of women, that strong community. Even to this day they enjoy each other, they have each other’s back, and they work together and they go through difficult situations maybe now with their kids or whatever, but they are there and they support each other so much.

It’s always beautiful to go and visit them at the factory and see how they live together and how they lift each other up. And Fahrije worked with bees, she had hives that her husband used to work with, so both the symbolism of the hive, of the women and her hives for real worked perfectly. I think Blerta did an amazing job with picking the title of the film and also working on the symbolism.

And another import aspect of the film is not only Fahrije’s story, but it also gives us the stark reality of the aftermath of the Kosovo war and the destruction it leaves. In this current political climate, it makes this film all the more relevant doesn’t it?

I know, I know, I wish that wasn’t the case, but with what we are seeing is happening in Ukraine personally breaks my heart. Because as somebody who was a teenager during the war, I was 16 when the war started, it brings back memories, it feels like déjà vu.  We are seeing people fleeing their homes and being traumatised and going through all of that. I know exactly how that feels because I have been a refugee, I have been somebody who had to flee the country, I have been somebody who was very afraid of my well-being, of my safely, just because I was Albanian. War changes people, wounds will heal but the scars will always be there to remind you of that. And when something like this happens those scars itch because they bring back memories, and you feel for those people and you just do not understand it. Its 2022 this shouldn’t happen, not in Europe, not anywhere for that matter. I know people who will see Hive now in UK cinemas will probably feel related to it and the situation that is happening. War sometimes leaves unbearable consequences. For people like Fahrije Hoti war is still going on, she’s still didn’t find her husband, her children do not have a grave to go and visit on the anniversaries; so these people never had a closure. And unfortunately a lot of people in Europe will not have a closure may be ever. 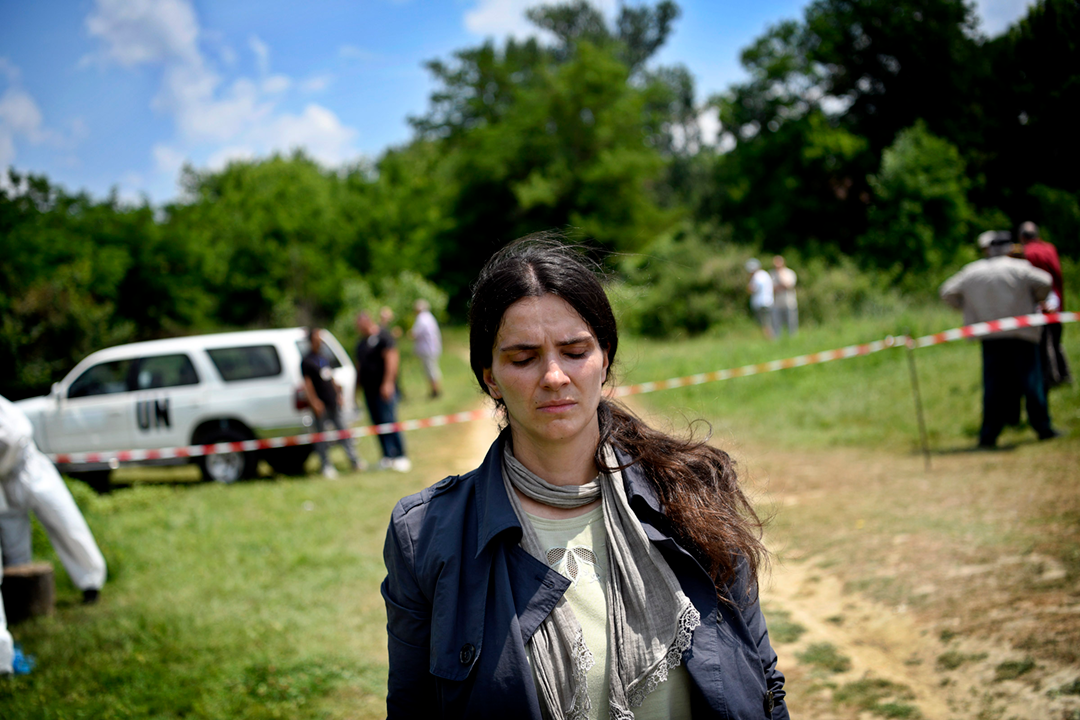 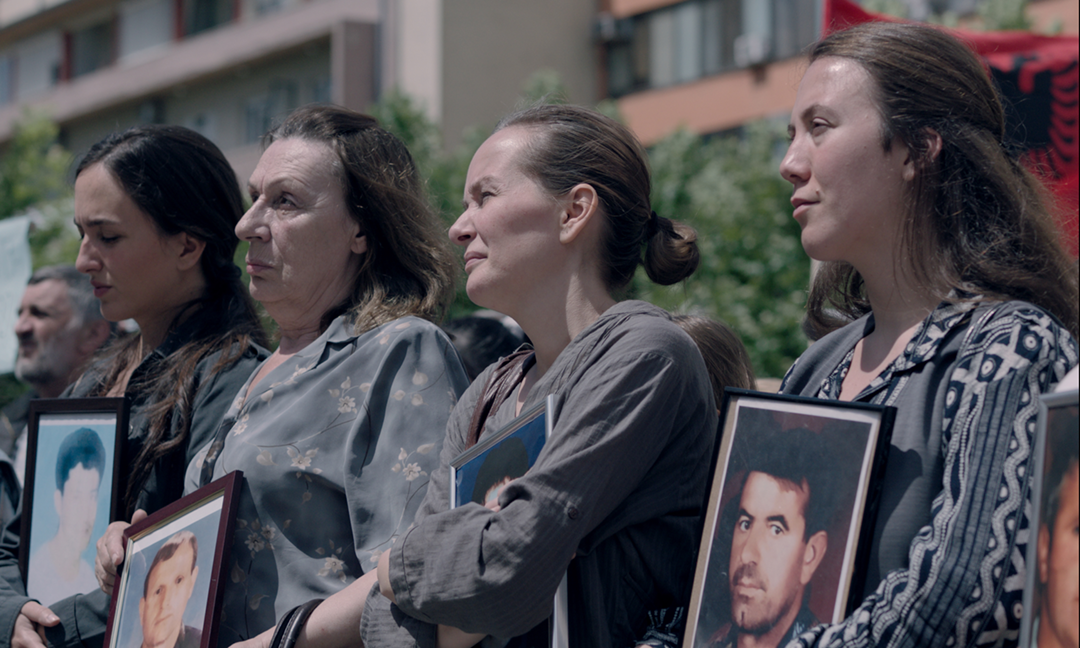 “War changes people, wounds will heal but the scars will always be there to remind you of that.” 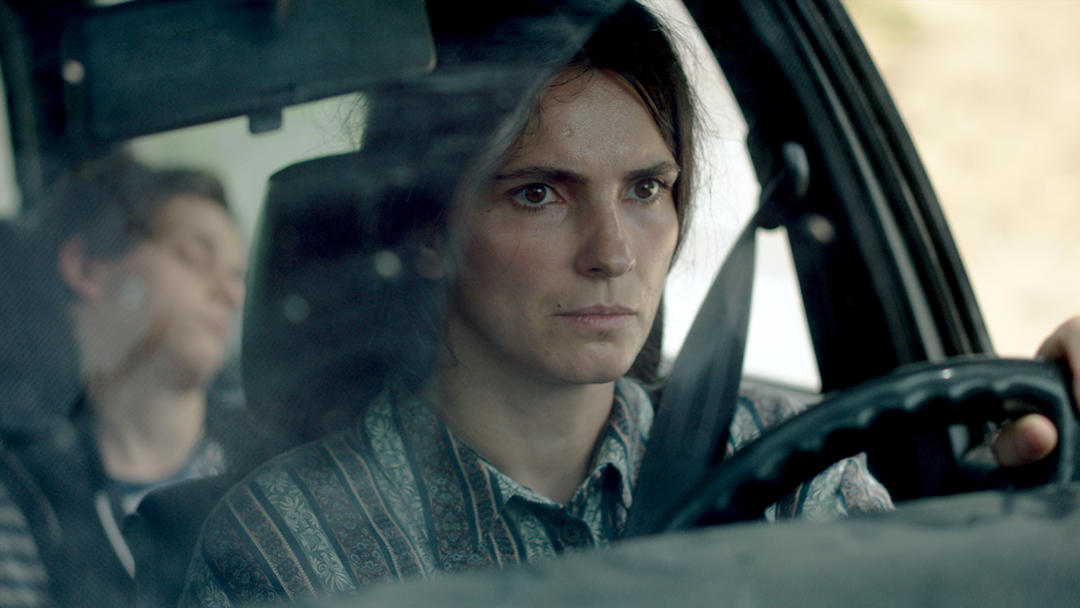 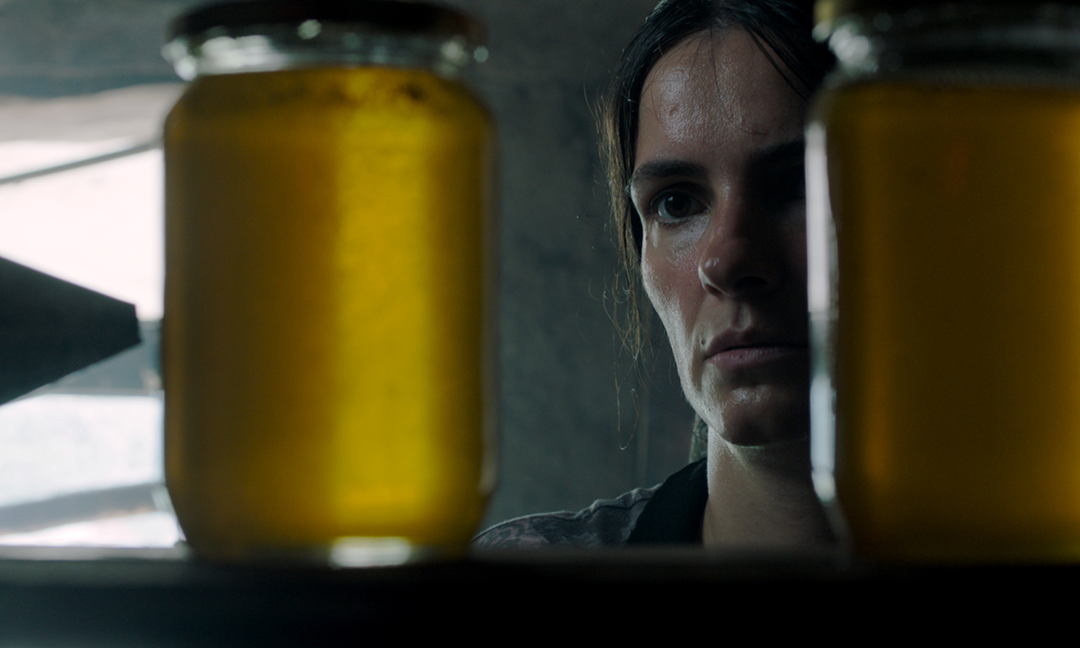 It was amazing we knew each other from before because we worked together on a short film when she was a student at NYU, and we had this mutual respect, this professional bond and lived with the desire and the dream to make a film about Fahrije Hoti for a long time. We were on the same page with so many things and then on the things we didn’t agree that much, we found a nice and polite and professional way to deal with those issues, it was great. Blerta is very hard working and she’s very inspiring as well. I mean Fahrije inspired us both, but I was inspired by Blerta and by her work ethic and by her ambitions and how she never gave up on this project. All the success that Hive had is definitely a big merit of the work of Blerta Basholli.

And finally, it is very easy to see why working on a film like this is so rewarding for you, but is there anything that you’ve taken away with you from working it? Like a memory that is particularly precious?

Honestly every single day and I’m not saying this as a cliché or because that’s what you’re supposed to say, but this is my honest feeling and opinion. Every single day that I was on set and even during rehearsals; we had three weeks of rehearsals before starting the shoot. It was a blessing. I enjoyed everything that we did together, but also the bond that we created because we shared a lot. We shared a lot of our stories from and after the war, and we became better friends and better human beings somehow because we helped each other overcome the traumas of the past. And from Fahrije I would say, I am still inspired, she is such an extraordinary woman and we should never take anything for granted. I saw so much poverty in the locations that we shot the film and people move on, Kosovo is developed in so many ways, but there is so much work that needs to be done. But the ones that moved on and built better lives for themselves should never take anything for granted and should be aware that there are still people who are fighting the consequences of war, even to this day. So we should work on making life a little better for those communities too. 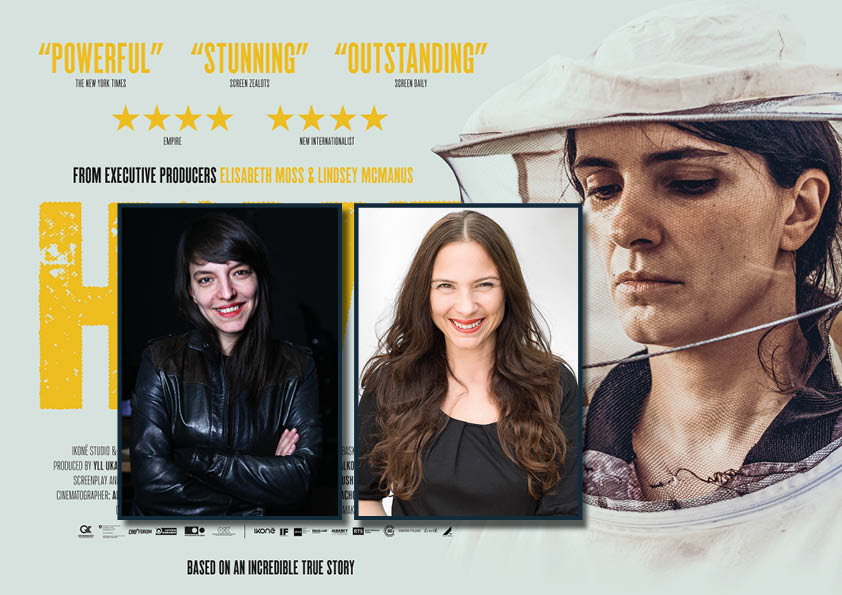